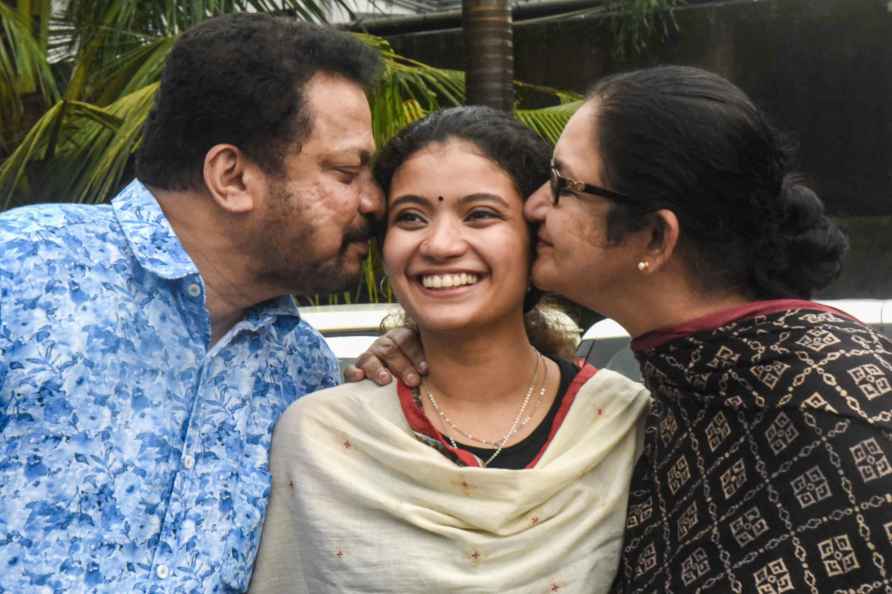 [Kochi: Anna Ben (C ), who bagged best actress award at the 51st Kerala State Film Awards instituted by Kerala State government for the year 2020, celebrates at her new film location along with parents Benny P Nayarambalam and Fulja Benny in Kochi, Saturday, Oct. 16, 2021. Anna Ben won the Best Actress award for her performance in the movie ' Kappela '. ( /PTI] Thiruvananthapuram, Oct 16 : Malayalam actor Jayasurya, who just a few day backs wrote himself into the record books when his 100th film was released, on Saturday added another feather to his crowded cap when he was named Best Actor by the jury of the 51st Kerala State Film Awards. The jury was chaired by the popular actress Suhashini and the awards were announced here by the state's Minister for Films and Fisheries Saji Cherian. Jayasurya bagged the award for his stellar role in the film 'Vellam'. Anna Ben, who is 26 years old, got the Best Actress award for her role in the film 'Kappela'. This is the second state award that Jayasurya has bagged in his two-decade-old acting career. Anna, who is the daughter of popular script writer Benny P. Nayarambalam, came to the notice of audiences and critics with her 2019 debut film, 'Kumbalangi Nights'. Ever since, she has been flying high. 'The Great Indian Kitchen' directed by Jijo Baby walked away with the Best Film award. Sidharth Siva was named Best Director for the film 'Ennivar'. The Best Character Actor award went to Sudheesh; Sreerekha was named the Best Character Actress. The hugely popular film 'Ayyapanum Koshyum' was adjudged the Best Film with Popular Appeal and Aesthetic Value. M. Jayachandran got the award for Best Music Director and Chandru Selvaj for Best Cameraman for their contributions to Sanal Kumar Sasidharan's 'Kayattam', which was one of the nominees for the Kim Jiseok Award at the 2020 Busan International Film Festival. /IANS

'Veerangana', 'The Spell of Purple' to be screened in IFFI Indian Panorama section
[**EDS HANDOUT PHOTO MADE AVAILABLE FROM PIB** Panaji: Director, Nikhil Mahajan of Indian Panorama Feature Film 'Godavari' along with cast and crew be

Lucknow, Nov 23 : Dr Kafeel Khan of Gorakhpur's BRD Medical College and Hospital, who was terminated from service on November 11, has said that he will move the High Court against the Uttar Pradesh go […]

Waukesha : A crowd attends a candlelight vigil for those affected by the Waukesha Christmas Parade tragedy in Cutler Park Monday, Nov. 22, 2021 in Waukesha, Wis.. The event was hosted by the Associati […]

Australian scientists embark on voyage to unlock secrets of earthquakes

Canberra, Nov 23 : Researchers from Australian National University (ANU) have embarked on a voyage to unlock the secrets of the Earth's inner layers. The ANU-led team on November 10 departed on […]