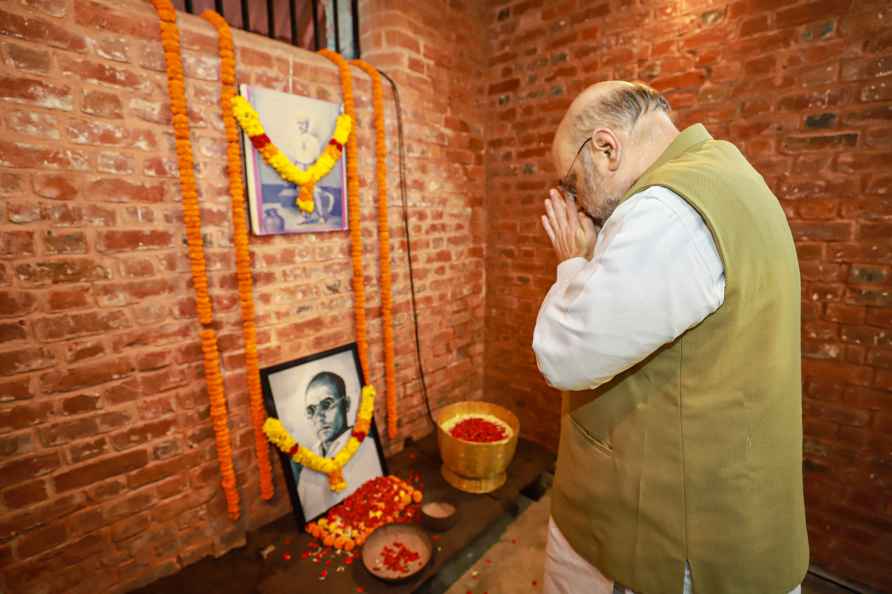 [**EDS: IMAGE PROVIDED BY MHA** Andaman & Nicobar: Union Home Minister Amit Shah pays tribute to Vinayak Damodar Savarkar at the Cellular Jail at Andaman & Nicobar Islands, Friday, Oct. 15, 2021. ( /PTI] New Delhi, Oct 15 : Union Home Minister Amit Shah will arrive at Port Blair on Friday on a three-day visit to the Andaman and Nicobar Islands to review various developmental works initiated with the Centre's assistance. According to Home Ministry officials, he will visit the Cellular Jail at Port Blair on Friday afternoon and will pay tribute to freedom fighter Veer Savarkar and also visit the Swatantra-Jyoti. He will also deliver a speech at 'Azadi ka Amrit Mahotsav' event and will flag off 'Go-GO tourist buses' to various destinations in Andaman. Shah will hold a review meeting tomorrow with the Lieutenant Governor Devendra Kumar Joshi, Director General of Police and other senior officials at Port Blair. During his stay in the Island, the Home Minister will also embark on an aerial survey of various development works under construction of 'Shaheed Dweep eco-tourism project' and 'Swaraj Dweep Water Aerodrome' in the Union Territory and will be visiting Netaji Subhash Chandra Bose Island during the day. On Sunday, he will attend a programme to be organised by the Andaman and Nicobar Police. On Thursday, he laid the foundation stone for the National Forensic Science University (NFSU) at NFSU at Dharbandora in South Goa and also addressed a public meeting there. Shah is also likely to visit the Union Territory of Jammu and Kashmir from October 23 to 25 to take stock of the different developmental works there which will be part of the Centre's mega outreach programme. /IANS

Thiruvananthapuram, Nov 28 : Kerala Education Minister, V. Sivankutty on Sunday said that more than 5,000 teachers of the state have not yet inoculated themselves. He said that this could not be justi […]

Johannesburg, Nov 28 : The South African National Parks (SANParks) is doing mass booking amendments from residents of various countries across the world following the banning of flights from some west […]