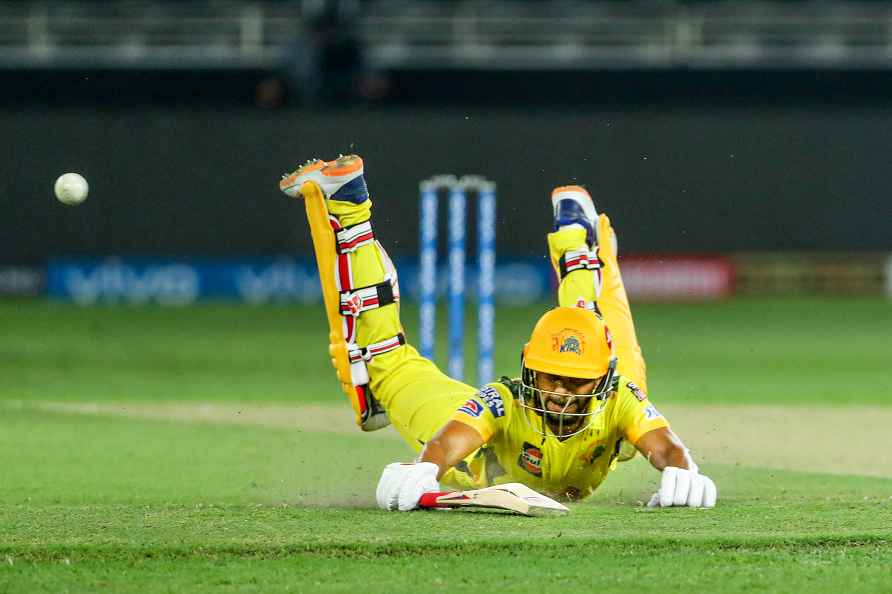 [Dubai: Ruturaj Gaikwad of Chennai Super Kings dives for the crease during the final of the Indian Premier League 2021 between the Chennai Super Kings and the Kolkata Knight Riders, at the Dubai International Stadium, UAE, Friday, Oct. 15, 2021. ( /PTI] Dubai, Oct 15 : A Chennai Super Kings (CSK) fan has helped Australian cricketer and former Sunrisers Hyderabad skipper David Warner make up his mind which team he should cheer for in the Indian Premier League (IPL) final between Chennai Super Kings (CSK) and Kolkata Knight Riders (KKR) here later on Friday. The cryptic post also built speculation around which franchise the Australian opener would prefer if given a choice in the upcoming season. The IPL mega auction for the 2022 season is expected to take place in December and two new teams will be added to the existing eight. In a tweet on Friday afternoon, Warner, who had a forgettable IPL 2021 season with SRH, where he was removed as skipper during the Indian leg and replaced by New Zealand's Kane Williamson, wrote, "I wasn't sure who to go for tonight (match) but I could not say no to this Fan who asked me to post this!! #ipl #indi #yellow #CSK jersey (Followed by Instagram link). The link directed the fans to Warner's Instagram page where the Australian posted an illustration sent to him by a little fan, which showed the cricketer and the little girl wearing Chennai Super Kings jerseys. The yellow jersey prompted Warner's fans to take to the social media and ask if he was planning a switch to the Chennai franchise next season. "Warner coming back to CSK next season," wrote a fan on twitter, while another fan wrote "W (Warner) Anna come home soonÂ? all the Yellove to you." Warner, who is in the bio-bubble in Dubai for the ICC T20 World Cup, had made a shocking revelation on October 12, saying that it was not explained by the SRH owners or the team management why he was dropped as captain. "With the utmost respect for the owners, Trevor Baylis, Laxman, Moody and Murali, when a decision gets made, it has to be a unanimous one. You don't know who the person is going for you and who isn't," Warner had told Sports Today. "The other disappointing thing for me was not being explained why I was dropped as captain. If you want to go along the lines of form, it is a difficult one because I guess whatever you have done in the past would have some weight moving forward, you would think. Especially when you have played about 100 games for the franchise, I think I had four bad games in those first five matches in Chennai. It is difficult, a tough pill to swallow. There are still questions to which I think I'll never get answers, but you have to move on," he had added. /IANS

Savita to lead India women's hockey team as Rani Rampal rested
[Bhubaneswar: German hockey team poses for a photograph on their arrival at the Biju Patnaik International airport ahead of the FIH Men's Hockey Junio

Panaji, Nov 18 : Following complaints from farmers, the Goa government on Thursday opened the doors for conditional culling of wild boars, which cause destruction to agricultural and horticultural cro […]

India now being called 'pharmacy of the world': Modi

New Delhi, Nov 18 : Prime Minister Narendra Modi on Thursday said the global trust earned by the Indian healthcare sector has led to the nation being called the "pharmacy of the world", in recent time […]

Stavanger : Brittany Bowe, of the US, center, the winner, is flanked on podium by Japan's Miho Takagi and fellow-countrywoman Nao Kodaira after the women's 1000m race during world cup skating at the S […]