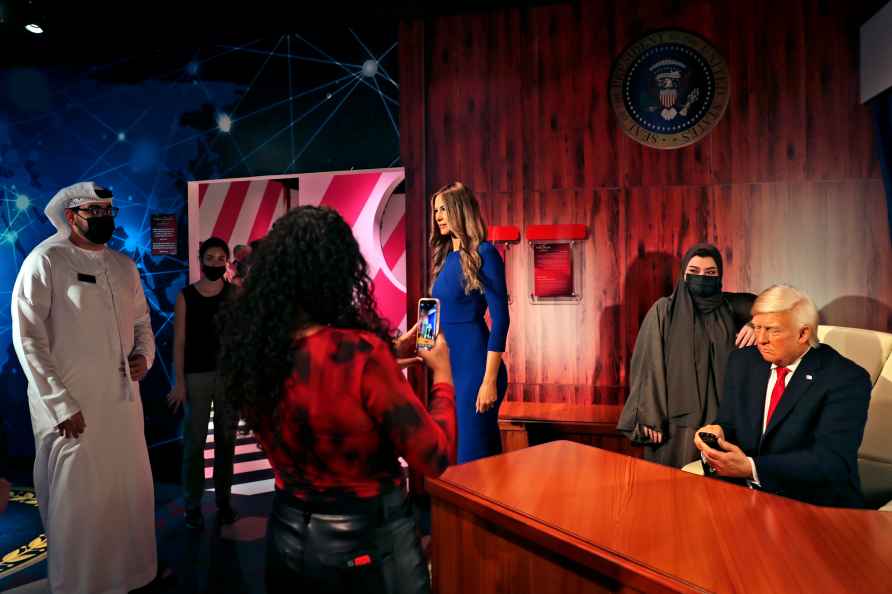 [Dubai : People visit the wax versions of former U.S. President Donald Trump and his wife Melania at the opening of the Madame Tussauds museum, in Dubai, United Arab Emirates, Wednesday, Oct. 13, 2021. The lavish waxworks temple located on a small artificial island off Dubai unveiled 60 celebrities and leaders, from a sultry Kylie Jenner to a beaming Chinese President Xi Jinping, along with a handful of Bollywood dance stars striking poses. /PTI] Washington, Oct 13 : US President Joe Biden could risk his entire first-term agenda if he fails to reduce the number of COVID-19 cases in the United States, experts said. The embattled president is plummeting in the polls amid multiple crises -- his botched withdrawal from Afghanistan, skyrocketing urban crime and a crisis at the US southern border, to name a few, Xinhua news agency reported. But the most pressing concern for the president remains the surging Delta variant, which is running rampant among the unvaccinated, analysts warned. Indeed, a recent poll from Quinnipiac, a leading polling university, found last week that just 38 per cent of Americans believe the president is doing a good job, down from 42 per cent just three weeks ago. Moreover, only a quarter approved of the president's handling of immigration, 39 per cent approved of his handling of the economy and 37 per cent approved of him as Commander-in-Chief, the poll found. "Battered on trust, doubted on leadership, and challenged on overall competency, President Biden is being hammered on all sides as his approval rating continues its downward slide to a number not seen since the tough scrutiny of the Trump administration," Quinnipiac said, referring to former President Donald Trump. The key to a comeback is getting the Delta surge under control, analysts said. But millions of Americans continue to decline the jab on fears of possible side effects and disinformation running wild on social media. Others fret over the fact that the vaccine is so new -- created in record time in a public-private partnership spearheaded by former President Trump. However, there may be light at the end of the tunnel for Biden. If the president can get things under control now, his approval numbers could rebound in the coming months, experts said. If not, he could face a crisis in leadership, and Democrats in Congress could distance themselves from him in the lead-up to next year's midterm elections. Luckily for Biden, he may have time on his side, as the midterms are still a year away. "It doesn't matter so much whether his numbers are down right now. What matters is whether his administration can execute a plan for success in the pandemic, as well as the economy, that people will feel in six months," Clay Ramsay, a researcher at the Center for International and Security Studies at the University of Maryland, told Xinhua. /IANS

IPL 2021: KKR win toss, opt to bowl against Delhi Capitals in Qualifier 2
[Sharjah: Shikhar Dhawan and Prithvi Shaw of Delhi Capitals during the qualifier 2 cricket match of the Indian Premier League between the Kolkata Knig

Mumbai, Oct 13 : The shooting for Kartik Aaryan and Kriti Sanon-starrer 'Shehzada' has begun. The film is set for a November 4, 2022 release. 'Shehzada' is directed by Rohit Dhawan. The film is […]

Twitter to make it easier to swipe between home, latest tweets

San Francisco, Oct 13 : Twitter is working on a new feature for users on iOS which would allow them to swipe between the home feed that shows the top tweets in the timeline and a chronological look at […]