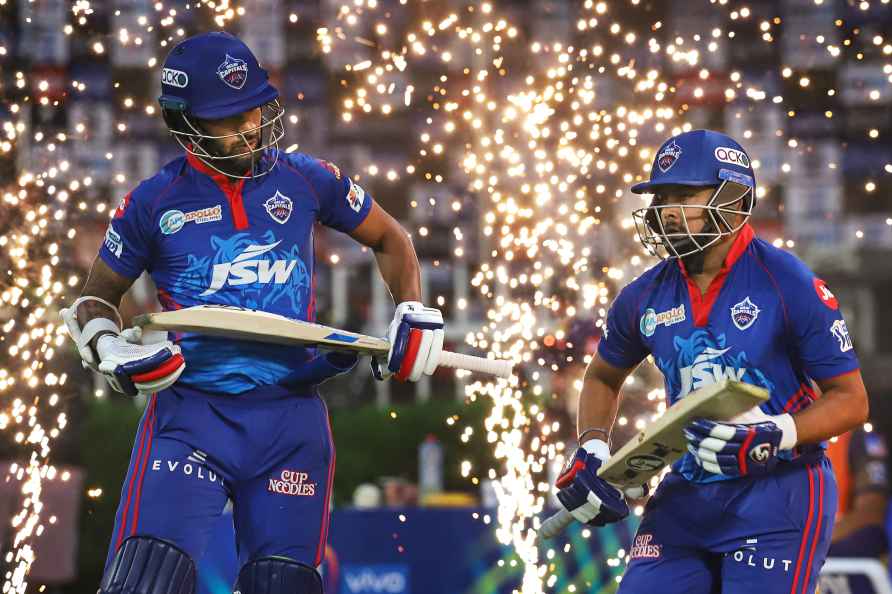 [Sharjah: Shikhar Dhawan and Prithvi Shaw of Delhi Capitals during the qualifier 2 cricket match of the Indian Premier League between the Kolkata Knight Riders and the Delhi Capitals, at the Sharjah Cricket Stadium, Sharjah, UAE, Wednesday, Oct. 13, 2021. ( /PTI] Sharjah, Oct 13 : Kolkata Knight Riders' captain Eoin Morgan won the toss and opted to field against Rishabh Pant's Delhi Capitals in Qualifier 2 of the IPL 2021 at the Sharjah Cricket Stadium, here on Wednesday. The two-time champions KKR didn't make any change in the team for this all-important match. "We are going to bowl first. We have played a few games here at Sharjah, so far it's worked. There might be a dew factor later on. We have kept the same side. We are playing some good cricket at the moment, we are confident as a side," said KKR captain Morgan at the toss. "Guys know their roles inside out, so hoping to come here today and produce something close to that. The mindset in the second leg has been spot-on," he added. On the other hand, Delhi Capitals, who are eyeing their maiden IPL title, made one change as Marcus Stoinis came in place of Tom Curran for this match. "We would have bowled first. We needed an extra batsman, so Stoinis comes in. Tom Curran is out. We are in a great frame of mind, always exciting to play together, looking to have fun during the match also," said DC skipper Pant at the toss. The winner of today's clash will take on Chennai Super Kings in the final, scheduled to be played at Dubai International Stadium on Friday. Teams; Delhi Capitals: Prithvi Shaw, Shikhar Dhawan, Shreyas Iyer, Rishabh Pant(w/c), Marcus Stoinis, Shimron Hetmyer, Axar Patel, Ravichandran Ashwin, Kagiso Rabada, Avesh Khan, Anrich Nortje Kolkata Knight Riders: Shubman Gill, Venkatesh Iyer, Rahul Tripathi, Nitish Rana, Eoin Morgan(c), Dinesh Karthik(w), Sunil Narine, Shakib Al Hasan, Lockie Ferguson, Shivam Mavi, Varun Chakaravarthy /IANS

IPL 2021: KKR win toss, opt to bowl against Delhi Capitals in Qualifier 2
[Sharjah: Shikhar Dhawan and Prithvi Shaw of Delhi Capitals during the qualifier 2 cricket match of the Indian Premier League between the Kolkata Knig

Lakhimpur Kheri (Uttar Pradesh), Oct 13 : In a freak accident, a college student was trampled to death by an elephant while he was trying to take a selfie with a herd that was passing through Mohammad […]

[Sharjah: Shikhar Dhawan and Prithvi Shaw of Delhi Capitals during the qualifier 2 cricket match of the Indian Premier League between the Kolkata Knight Riders and the Delhi Capitals, at the Sharjah C […]

Tokyo, Oct 13 : Japanese pharmaceutical group Mitsubishi Tanabe Pharma is planning to launch the first-ever plant-based Covid-19 vaccine in the world, which will likely to be of low-cost, easier to tr […]