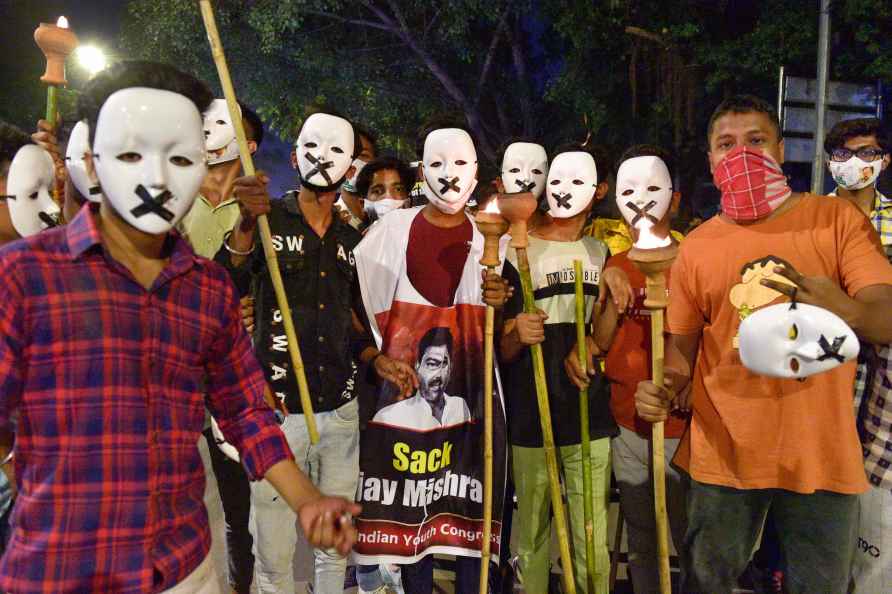 [New Delhi: Indian Youth Congress (IYC) activists carry out 'Mashal Aakrosh Julus' from IYC headquarters to Jantar Mantar, demanding justice for the Lakhimpur Kheri violence victims and suspension of Union MoS for Home Affairs Ajay Kumar Mishra, in New Delhi, Wednesday, Oct. 13, 2021. ( /PTI] New Delhi, Oct 13 : The Congress on Wednesday demanded the dismissal of Union Minister of State for Home Affairs Ajay Mishra Teni for a free and fair probe into the Lakhimpur Kheri violence that claimed eight lives. A Congress delegation, led by its former president Rahul Gandhi, and comprising leaders Mallikarjun Kharge, Ghulam Nabi Azad, A.K. Antony and Priyanka Gandhi Vadra, met President Ram Nath Kovind on Wednesday morning during which it put forth the demand. The Congress had sought time to meet Kovind on October 9, and it was given a 11.30 a.m. slot on Wednesday by Rashtrapati Bhavan. The delegation discussed in detail with the President the farmers' deaths in the violence, investigation into the incident, and pressed for the removal of Teni. After meeting Kovind, Kharge said that Priyanka Gandhi Vadra and Rahul Gandhi were included in the delegation as they have met the victims' families. "We have sought the President's intervention in the matter and have submitted a memorandum," he said. The Wayanad MP added that the families of the victims are demanding justice and punishment to the guilty. The families are worried that they will not get justice as the father of the accused is a Union minister, Rahul Gandhi said. They demanded an inquiry into the incident by a sitting judge of the Supreme Court. Priyanka Gandhi shared some concerns of the victims' families who said that till the time the alleged accused's father holds a minister's post, a fair probe cannot be expected. "If you are poor, and a woman, you cannot get justice, but if you are a BJP minister, the law of the land does not apply to you," she alleged. The grand old party has launched a country-wide agitation pressing for the removal of Teni. On Tuesday, Priyanka was present during the last rites of the victims of the violence. Eight people, including farmers and a journalist lost their lives in the violence. The incident occurred when one of the vehicles of the convoy of the UP Deputy CM and the union minister allegedly mowed down protesters who were agitating against the visit of UP Deputy Chief Minister Keshav Prasad Maurya and Teni. A probe is underway and FIRs have been registered against many people. /IANS

Thanks to Fadnavis, I remembered I was 4-time CM, quips Sharad Pawar
[Mumbai: Maharashtra NCP President Jayant Patil along with Nationalist Congress Party Chief Sharad Pawar during a press conference in Mumbai, Wednesda

Tokyo, Oct 13 : Japanese pharmaceutical group Mitsubishi Tanabe Pharma is planning to launch the first-ever plant-based Covid-19 vaccine in the world, which will likely to be of low-cost, easier to tr […]

By Ujwal Jalali New Delhi, Oct 13 : The suspected Pakistan terrorist, who was arrested by the Special Cell of Delhi Police in the national capital, has revealed that he was involved in the Delhi Hi […]