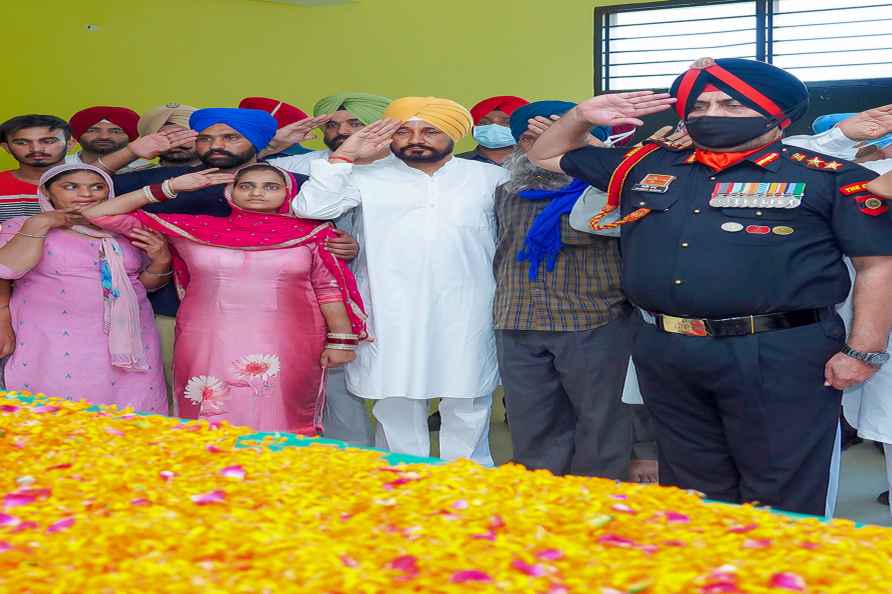 [Rupnagar: Punjab Chief Minister Charanjit Singh Channi with family members of martyr Sepoy Gajjan Singh pays tribute to him during his funeral, at Pachranda village in Rupnagar district, Wednesday, Oct. 13, 2021. Gajjan Singh died in a militant attack in J&K's Poonch on October 11. ( /PTI] Chandigarh, Oct 13 : Lending his shoulder to the bier of the martyr, Punjab Chief Minister Charanjit Channi on Wednesday paid tributes to Sepoy Gajjan Singh, 26, who was cremated at his native village Pachranda in Nurpur Bedi in Ropar district with full military honours. Accompanied by Assembly Speaker K.P. Singh, the Chief Minister laid wreath and participated in the 'ardas'. Channi also accompanied the martyr's nephew and his father to lit the pyre of the braveheart who made the supreme sacrifice in the line of duty in a gunfight with the terrorists in Poonch sector in Jammu and Kashmir on October 11. Sharing his sympathies with members of the bereaved family, the Chief Minister said that Gajjan Singh's unprecedented sacrifice would ever inspire his fellow soldiers to perform their duties with utmost dedication and commitment to preserve the country's sovereignty and integrity. Married eight months ago, Sepoy Gajjan Singh was youngest of four brothers and had joined the army nine years ago. He got married in February and his picture in wedding attire, holding a farmer union flag, was widely circulated on the social media. The martyr is survived by his wife Harpreet Kaur and parents -- Charan Singh and Malkeet Kaur. /IANS

Thanks to Fadnavis, I remembered I was 4-time CM, quips Sharad Pawar
[Mumbai: Maharashtra NCP President Jayant Patil along with Nationalist Congress Party Chief Sharad Pawar during a press conference in Mumbai, Wednesda

San Francisco, Oct 13 : Facebook has pulled down 1,259 accounts, Pages and Groups from its main app as well as Instagram in September for manipulating public debate. In Iran, it removed 93 Faceb […]

By Nishant Arora New Delhi, Oct 13 : At a time when crypto buzz is picking up in India, the time is ripe not only to create awareness but also build trust among the first-time investors in the coun […]