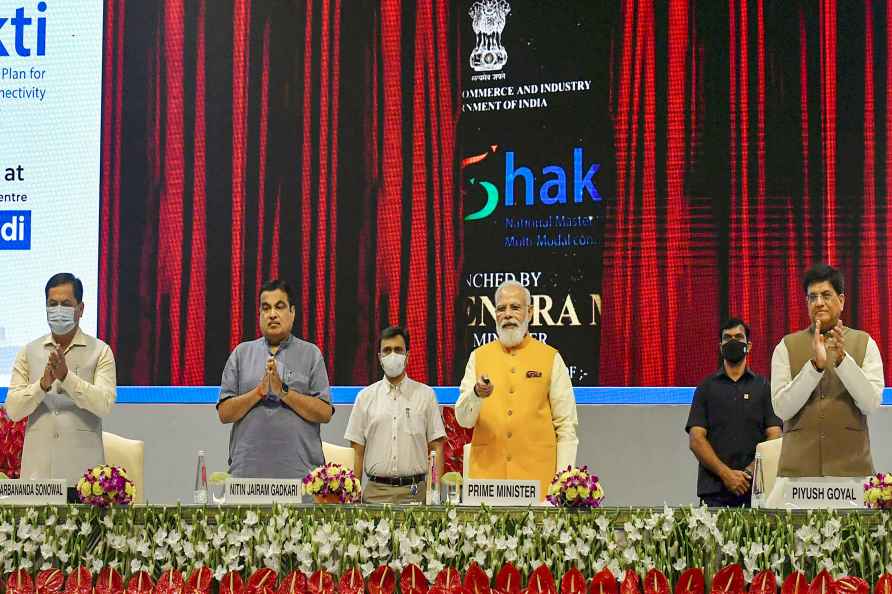 [**EDS: IMAGE MADE AVAILABLE FROM PIB** New Delhi: Prime Minister Narendra Modi launches the PM Gati Shakti - National Master Plan, at Pragati Maidan, in New Delhi, Wednesday, October 12, 2021. Union Ministers Nitin Gadkari, Piyush Goyal and Sarbananda Sonowal are also seen. ( /PTI] New Delhi, Oct 13 : Unveiling the GatiShakti National Master Plan, Prime Minister Narendra Modi on Wednesday said that the programme will boost India's self-confidence and make the country self-reliant (Atmanirbhar) as today, "we have laid the foundation for the next 25 years." "This national masterplan will give impetus to the 21st century India. It will boost the next generation infrastructure and multi model connectivity in the country while speeding up the national policy from planning to execution level," Modi said while inaugurating the GatiShakti National Master Plan and new exhibition complexes of the India Trade Promotion Organisation (ITPO) at Pragati Maidan on Wednesday afternoon. Modi said that his government has not only developed a work culture of completing the projects within the stipulated time, but is aiming to complete the projects ahead of time. "Earlier, we used to see 'work in progress' boards everywhere and people started to believe that it will never be completed. This has been changed now with our planning and well-introduced 'gati' in development projects," he said. Claiming that infrastructure development has hardly been the priority of any political party in the past, the Prime Minister said, "However, quality infrastructure is a way to sustainable development which builds economy and generates employment." Modi cited the example of the Delhi Metro. "Before 2014, the metro was running on only about 250 km of track. Today, the metro has been expanded up to 700 km and work is going on, on 1,000 km new metro route," he added. Modi pointed out that in the five years before 2014, only 60 panchayats could be connected with optical fibre. "However, in the last seven years, we have connected more than 1.5 lakh gram panchayats with optical fibre." The Prime Minister alleged that taxpayers' money was wasted in the past due to delays and a lethargic approach to development work, which his government aspires to change. /IANS

Los Angeles, Oct 13 : The survival game series 'Squid Game' is officially the most popular TV show on its initial debut that Netflix has ever released, according to the streaming giant. The stre […]

Have laid India's foundation for next 25 yrs with GatiShakti plan: PM