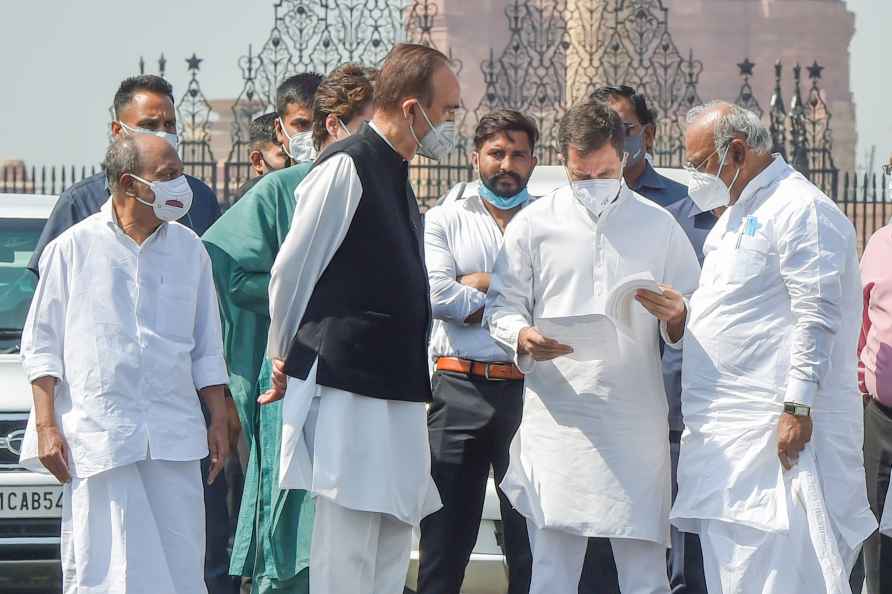 [New Delhi: Congress delegation members MP Rahul Gandhi, Leader of Opposition in Rajya Sabha Mallikarjun Kharge, senior leader Ghulam Nabi Azad, MP A.K. Antony, and party General Secretary Priyanka Gandhi after a meeting with President Ram Nath Kovind on the Lakhimpur Kheri incident, in New Delhi, Wednesday, Oct. 13, 2021. ( /PTI] New Delhi, Oct 13 : The BJP leadership believes that the Lakhimpur Kheri incident has no major impact on the party in Punjab assembly polls. It was believed that in Punjab the violent incidents will adversely affect the BJP in Punjab, where the party is already facing strong opposition from farmers since last one year. BJP national general secretary and Punjab in-charge, Dushyant Gautam told IANS that farmers protest was politically motivated and the Lakhimpur Kheri incident had no impact on the polls in Punjab or Uttarakhand in the area bordering Uttar Pradesh. "There are only two per cent farmers misled by leftists and other political parties are trying to disturb the peaceful environment in the state. Lakhimpur Kheri incident has no impact either in Punjab or Uttarakhand," Gautam said. A senior BJP insider said that everyone knows that some political parties are politicising the farmers' unrest for their electoral benefits and in Punjab the protests were patronized by the ruling party to create a false atmosphere of unrest. "All the incidents of violence or attacks on BJP leaders in Punjab were politically motivated and done by a handful of anti-social elements. Political parties are misleading farmers over new farm laws with vested interest. Everyone understands that the Narendra Modi government brought the new farm laws for the benefit of farmers, but opposition parties misleading people by creating doubts in their mind. Now, they are trying to politicize the Lakhimpur Kheri incident but they will not succeed in their mischievous intention," a BJP leader said. Saffron camp claims that in Punjab only 2-3 per cent of farmers are participating in the agitation against the union government. "Only two or three per cent of farmers in Punjab are part of agitation. Most people in Punjab are peace loving and they are against any type of violence and they know the truth about who all are behind these protests," a senior party leader said. Eight persons including a journalist were killed during a farmers protest in Lakhimpur Kheri which turned violent earlier this month. /IANS

Lakhimpur Kheri incident has no impact on party in Punjab polls: BJP