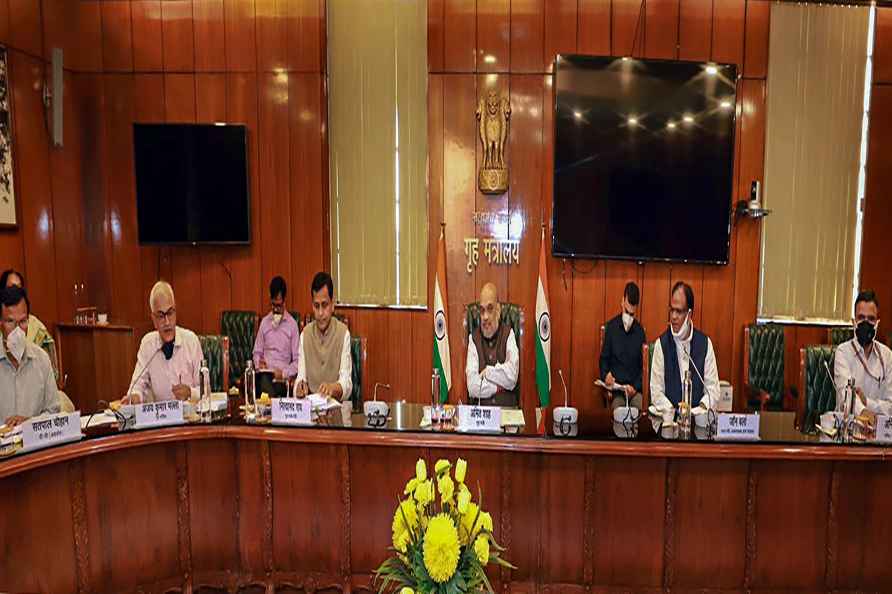 [**EDS: IMAGE MADE AVAILABLE FROM PIB** New Delhi: Union Home Minister Amit Shah during a meeting with the Gorkha representatives from the Darjeeling Hills, Terai & Dooars region and the Government of West Bengal, in New Delhi, Tuesday, October 12, 2021. Union Minister of State for Home Affairs Nityanand Rai and other dignitaries are also seen. ( /PTI] New Delhi, Oct 12 : After resigning from the state President of Punjab, Navjot Singh Sidhu will have his first official meeting with the Congress central leadership on Thursday. "Navjot Singh Sidhu, President, Punjab Congress, will be meeting me and (K.C.) Venugopal ji for discussion on certain organisational matters pertaining to Punjab Pradesh Congress Committee at Venugopal ji's office on October 14 at 6 p.m.," AICC General Secretary and the party's Punjab in-charge, Harish Rawat, said in a tweet. After Sidhu had quit over differences with Chief Minister Charanjit Singh Channi, the central leadership has called him to listen to his grievances. It's likely that Sidhu will put forth the list of demands in the Punjab government as he is upset with the appointments in the government. He has resigned from the post of state president, but it has not been accepted yet by Sonia Gandhi. The meeting gains significance as it comes ahead of the CWC meeting. The Congress is likely to convey Sidhu to withdraw his resignation and work in tandem with the Chief Minister. The Congress wants to put its house in order ahead of polls and despite removal of Amarinder Singh there has been no resolution of the issues. Sidhu is Unhappy over the first Cabinet expansion, allocation of portfolios and appointments on crucial posts, including the Advocate General and the DGP, by the Chief Minister. The Congress leadership has given a go ahead to a coordination committee after the Chief Minister tried to placate Sidhu and said that the decision will be taken collectively. Navjot Singh Sidhu after his resignation has said he will always stand by party leaders Rahul Gandhi and Priyanka Gandhi Vadra. In a tweet Sidhu said, "Will uphold principles of Gandhi Ji & Shastri Ji... "Post or No Post, will stand by Rahul Gandhi and Priyanka Gandhi! Let all negative forces try to defeat me, but with every ounce of positive energy will make Punjab win, Punjabiyat (Universal Brotherhood) win & every Punjabi win!!" Navjot Singh Sidhu was on forefront in Lakhimpur Kheri where he proceeded on indefinite fast in support of his demand for action against Union Minister of state for Home Affairs Ajay Mishra Teni's son Ashish Mishra. He also led a large convoy to support Priyanka Gandhi in her agitation. /IANS

Ahead of CWC meet, Sidhu to meet party leadership in Delhi

[**EDS: IMAGE MADE AVAILABLE FROM PIB** New Delhi: Union Home Minister Amit Shah during a meeting with the Gorkha representatives from the Darjeeling Hills, Terai & Dooars region and the Government of […]

Hyderabad, Oct 12 : People suffering from arthritis should maintain an active lifestyle as physical exercise reduces inflammation by reducing fat and increasing the production and release of anti-infl […]

Chennai, Oct 12 : Special teams of the National Investigation Agency (NIA) are conducting raids in several parts of Tamil Nadu. Sources in the premier investigating agency revealed that the raids in t […]

London, Oct 12 : At least 750 sexual misconduct accusations were made against serving police officers across the UK between the year 2016 and 2020, new data has revealed. According to figures ob […]