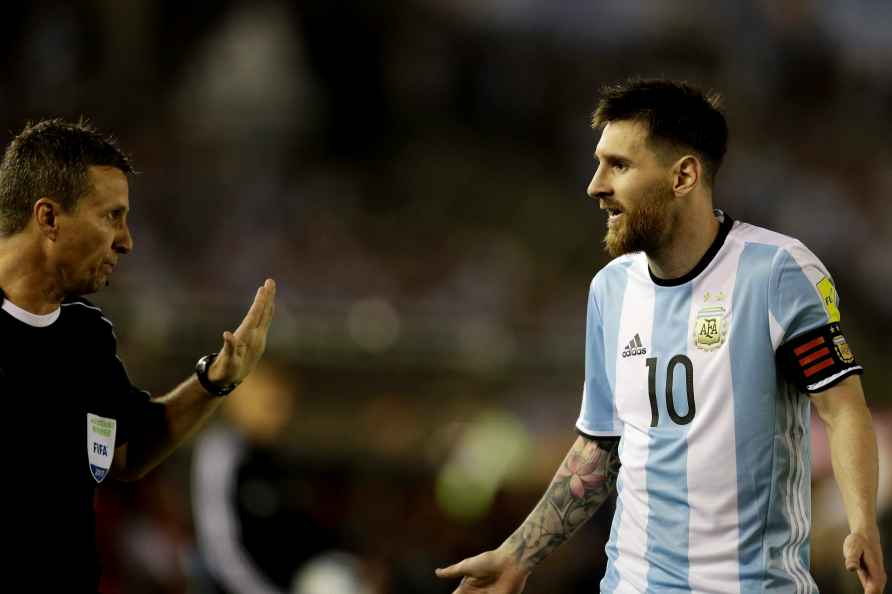 Buenos Aires, Oct 7 : Lionel Messi is fully fit and motivated for Argentina's South American World Cup qualifiers against Paraguay, Uruguay and Peru, manager Lionel Scaloni has said. Messi trained freely with his Albiceleste teammates on Wednesday, dispelling fears the 34-year-old could still be bothered by a knee injury suffered while playing for Paris Saint-Germain in late September. "He has trained with no problems and is fine," Scaloni told a virtual news conference. "He has come with a desire to be with the team and he wants to give his all, just like everybody in the group. In regards to the injury, he's played two games since then and everything is fine." Argentina will meet Paraguay in Asuncion on Thursday before home clashes against Uruguay and Peru on October 10 and 14, respectively. The Albiceleste are currently second in the 10-team South American qualifying group with 18 points from eight matches, six points behind leaders Brazil. Scaloni said his starting line-up for the match against Paraguay at Defensores del Chaco stadium would be close to the one that beat Brazil in the Copa America final at the Maracana stadium in July. "Maybe there will be a tweak here or there, if there is a player feeling any discomfort," Scaloni said. "But it's going to be almost 99% the same as the team for the Copa America final." He added that his players needed to be alert to the challenges posed by Paraguay, who are sixth in the standings with 11 points from nine games, reports Xinhua. "Paraguay are uncomfortable opponents to face. We will wait to see the game they propose but our way of playing will not change. "They are playing at home and need the win. I think they will have more offensive responsibility than in recent matches," Scaloni added. /IANS