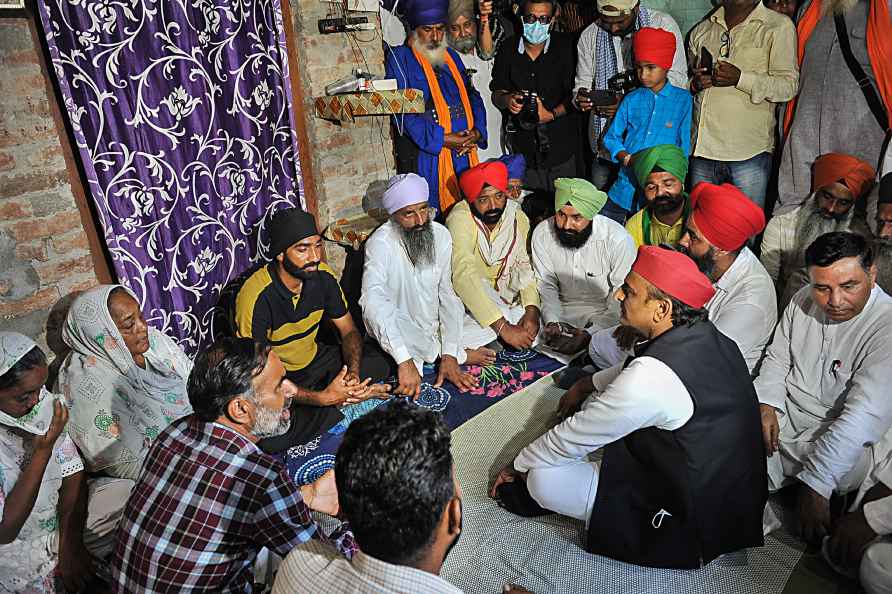 [**EDS: IMAGE PROVIDED BY SP** Lakhimpur Kheri: Samajwadi Party President Akhilesh Yadav meets the families of the victims of Lakhimpur Kheri violence, Thursday, Oct. 7, 2021. ( /PTI] Lucknow, Oct 7 : Congress General Secretary Priyanka Gandhi Vadra on Thursday demanded a probe by a sitting judge of the Supreme Court or a high court into the Lakhimpur Kheri violence. She also said that Union Minister Ajay Mishra Teni, whose son is among those booked, should resign to ensure an impartial probe. "In my view and that of the victims' families as well, the case should be probed by a sitting Supreme Court or high court judge, and not the retired judge," she said. The state government, on Thursday, had appointed retired high court judge Pradeep Srivastava to probe the Lakhimpur violence. Priyanka Gandhi visited a temple on the first day of Navratri and said that she was fasting. She said that she had prayed for the welfare of all. Meanwhile, as she left for Bahraich on Thursday to meet the family of another deceased farmer, Samajwadi Party President Akhilesh Yadav and Bahujan Samaj Party MP Satish Chandra Mishra made their way to Lakhimpur to meet the families of those who had lost their lives in Sunday's violence. Akhilesh Yadav questioned the delay in the arrest of Ashish Mishra, son of Union Minister Ajay Mishra Teni and said that it was futile to expect any justice from the BJP government. BKU spokesperson, Rakesh Tikait, while talking to reporters in Rampur, said that if Ashish Mishra was not arrested by October 12, when the post death rituals of the deceased persons will take place, the BKU would launch a massive agitation. /IANS

J&K govt orders magisterial probe into Hyderpora encounter
[Srinagar: Leaders and workers of J&K People's Conference hold placards and shout slogans during a protest demanding a probe into the killings of civi

US designates Pakistan, Taliban as violators of religious freedom

New Delhi, Nov 18 : US Secretary of State Antony Blinken has redesignated Pakistan as a Country of Particular Concern (CPC) for violating religious freedom and also rebranded the Taliban as an Entity […]