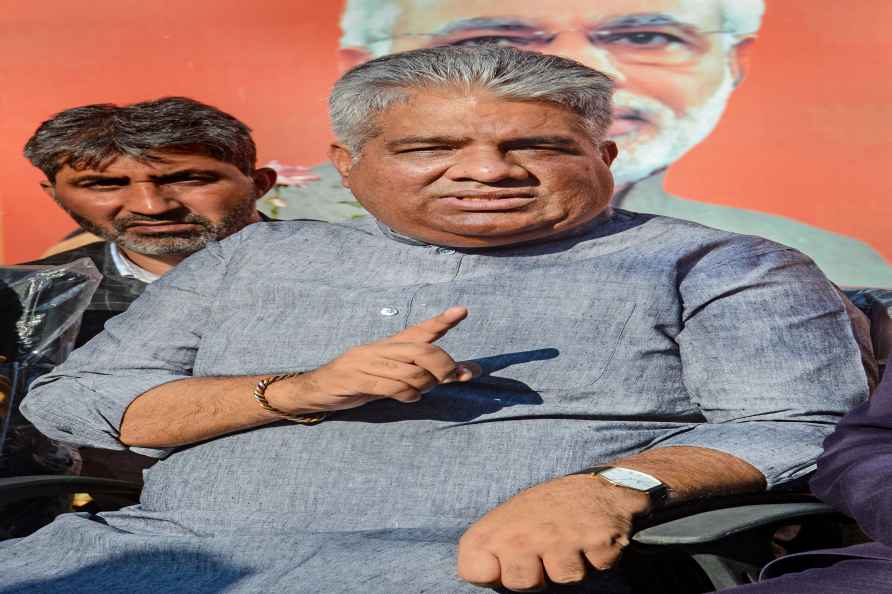 [Srinagar: Union Minister for Forest Environment and Bharatiya Janata Party (BJP) National General Secretary Bhupender Yadav addresses a press conference during his visit to valley, at BJP Headquarters in Srinagar on Thursday, Oct 07, 2021. ( /PTI] New Delhi, Oct 7 : Bharatiya Janata Party (BJP) president JP Nadda on Thursday reconstituted the party's national executive committee. According to the list issued by the BJP general secretary Arun Singh, 80 leaders including Prime Minister Narendra Modi, veteran leaders L.K. Advani, Murli Manohar Joshi, former national president Rajnath Singh, Amit Shah, and Nitin Gadkari have been nominated in the new committee. Besides these 80 leaders, 50 leaders have been included as special invitees and 179 leaders as permanent invitees (ex-officio) have been included in the party's national working committee, including Chief Ministers from the BJP, Deputy Chief Minister, MLAs in various Legislative Assemblies and Legislative Councils. Also, party leaders, former deputy chief ministers, national spokesperson, national front president, state in-charge, state co in-charge, state president and state organisation general secretary are also included. Nadda has also announced the names of the office bearers of his national team. Thirteen leaders including former Chhattisgarh chief minister Raman Singh and former Rajasthan chief minister Vasundhara Raje, have been appointed national vice-presidents. By adopting the one person one post formula, Union Minister Bhupender Yadav has not been named as a national office bearer this time. Apart from Yadav, all the general secretaries included in the previous team have been given a place in the new team. B.L. Santosh has once again been given the responsibility of National General Secretary (Organisation). However, this time Nadda has named only one co-organisation General Secretary, Shivprakash, while V. Satish has been appointed the organiser. The BJP president has also announced the name of 11 secretaries and 23 national spokespersons in his new team. Along with this, the name of the presidents of various fronts of the party have also been announced, in which no change has been made. /IANS

Will Gehlot vs Pilot tiff end with cabinet reshuffle?
[New Delhi: Congress workers participate in the second phase of the ?Pol Khol Yatra? under the Jan Jagran Abhiyan, under the leadership of Delhi Prade

10 Chhath Puja devotees killed in road mishap in Assam
[**EDS: BEST QUALITY AVAILABLE** Karimganj: Police personnel and locals at the site of an accident after head-on-collision between a truck and an auto

Software-based transfer posting to be implemented in CRPF by next year
[Beijing: Security personnel guard the entrance to the Jingxi Hotel where roughly 200 members of the Central Committee are holding a plenary session i

Vicky Kaushal dives 'Into the Wild with Bear Grylls'

Mumbai, Nov 10 : After Bollywood actor Ajay Devgn, the upcoming episode of the second season of 'Into The Wild with Bear Grylls' will have Vicky Kaushal as the special guest. The actor opens up […]

Chennai, Nov 10 : Heavy rains and waterlogging across Chennai have sent vegetable prices soaring in the wholesale Koyambedu market, while prices in the retail vegetable markets too have catapulted. […]