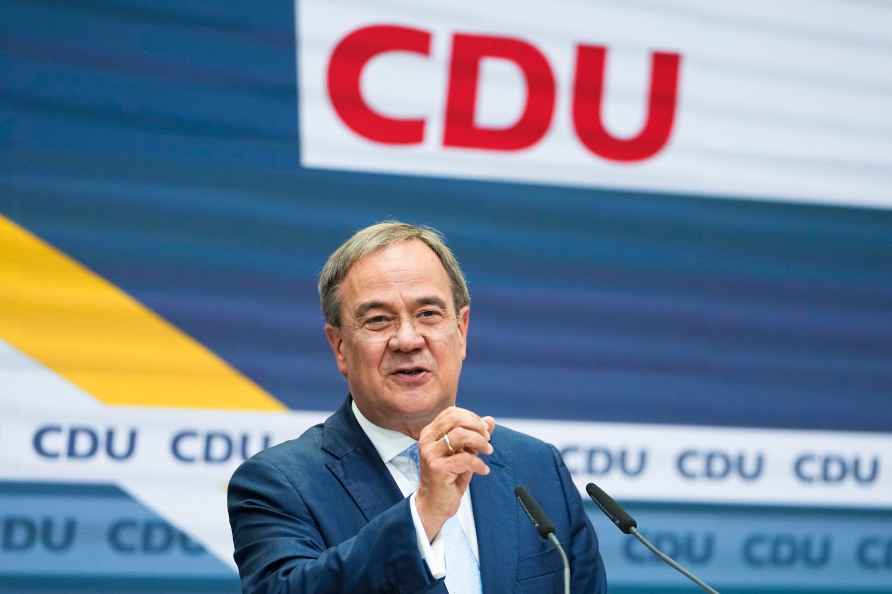 Berlin, Sep 27 : For a generation of Germans, Angela Merkel was the only Chancellor they knew but in the first election after she announced her decision to quit, her Christian Democratic Union pparty seems to be on verge of losing its decade and a half years grip on power with the Socialist Democrat Party (SPD) taking a slender edge in Sunday's elections. Though the new contours of the new government are still unclear - and set to emerge after several rounds of negotiations between the top four-five parties, several combinations like "Traffic Light", "Kenya", "Jamaica" or "Germany" - based on the main parties' colours - are possible. SDP leader Olaf Scholz, who led his left-leaning party to a revitalised performance, has claimed that the mandate is for a SPD-led coalition with the pro-enviromental Greens and the FDP, and dismissed continuing the present coalition with the CDU, where it was a junior partner and he served as Merkel's Finance Minister. However, Merkel's handpicked successor, Armin Laschet, who led the party to its worst performance in years and failed to get elected on his own in his home state, and will enter the Bundestag (the Federal Parliament) on the party list, is not conceding defeat yet and says the race is still open. The claims and counter-claims signal a protracted sense of negotiations before the eventual winner is decided. At a whopping 735 seats, this Bundestag is the largest ever, and will have the SPD with 206 seats, the CDU, with its Bavarian sister party, the Christian Social Union, at 196, the Greens at 118, the liberal, pro-business FDP with 92, the far-right AfD with 83, the Left with 39, while one small party has got in with one seat. The Bundestag's burgeoning numbers is due to Germany's unique electoral arrangements, where the top candidate in 299 constituencies gets a seat, while another 299 seats are filled by party lists in the 16 federal states, with voters ranking the candidates in order of preference. An extra 137 seats come from second-preference votes, based on the population in each state and how many votes go to the second-placed party. Adding to the confusion, parties need to clear the 5 per cent minimum vote share, or win three constituency seats, in order to enter parliament. The rules lead to fragmentation and make necessary for both the big parties - the CDU and the SPD - having to depend on a smaller ally, or even each other (the two are presently in a coalition) to get a parliamentary majority. That is where the possible permutations and combinations come in - with the Greens, who have made their strongest showing so far despite not fulfilling the expectation of a better performance, and the FDP, or both, as the kingmakers. The right-wing AfD is off-limits as a coalition partner for both the big parties. Among possible combinations, there is the "Traffic Light" combination the SPD (red), the FDP (yellow), and the Greens (green), "Jamaica" the CDU (black), the FDP, and the Greens, "Kenya", the CDU, the SDP, and the Greens, and "Germany" the CDU, the SPD and the FDP. However, with the CDU contesting the SPD's slim advantage and months of political negotiations likely before the new regime is decided, Merkel will stay in power for the time being. /IANS

Germany set for change as Merkel generation sees its time end?
Berlin, Sep 27 : For a generation of Germans, Angela Merkel was the only Chancellor they knew but in the first election after she announced her decisi

Berlin, Sep 27 : For a generation of Germans, Angela Merkel was the only Chancellor they knew but in the first election after she announced her decision to quit, her Christian Democratic Union pparty […]

New Delhi, Sep 27 : Ratings agency ICRA on Monday revised its real GDP growth forecast for India in FY2022 to 9 per cent from 8.5 per cent. The agency credited the upward revision in the GDP to […]

IPL 2021: A look at Harshal Patel's magnificent hat-trick in the 17th over

New Delhi, Sep 27 : Harshal Patel just loves bowling to Mumbai Indians, it seems. As he took a hat-trick against a team that he had bullied with a five-wicket haul in their previous encounter of the I […]