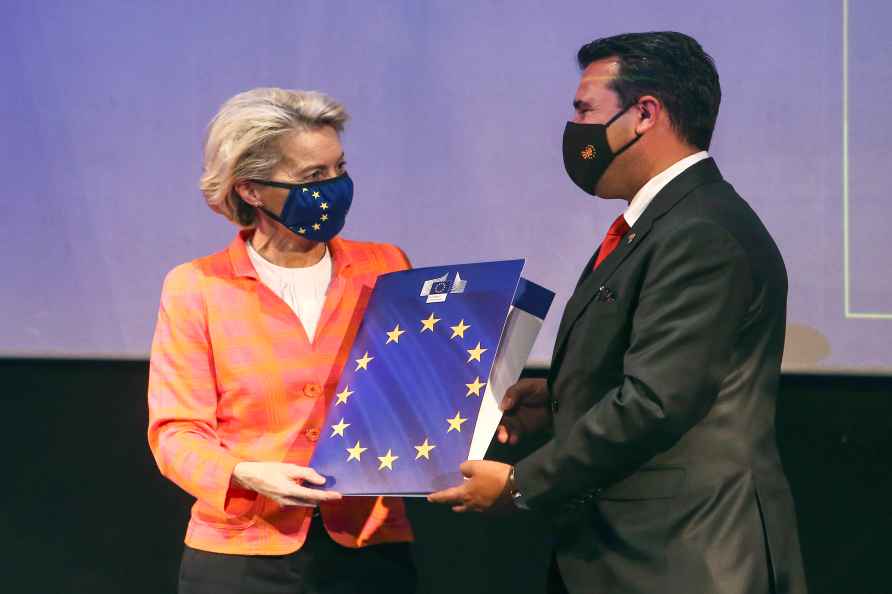 [Skopje : European Commission President Ursula von der Leyen, left, hands over a 2,6 Million Euro grant for the program EU for youth, to North Macedonia's Prime Minister Zoran Zaev, right, during their news conference in Skopje, North Macedonia, on Tuesday, Sept. 28, 2021. Top European Union's official has expressed hope Tuesday that Albania and North Macedonia will open the accession talks with the block by the end of this year. /PTI] Seoul, Sep 28 : North Korea fired one short-range missile into the East Sea on Tuesday, South Korea's Joint Chiefs of Staff (JCS) said. The missile was fired from the North's Mupyong-ri in Jagang province eastward at around 6.40 a.m., the JCS said, adding the South Korean and US intelligence authorities are analysing the launch for additional information, reports Xinhua news agency. It did not however, specify if the projectile is a ballistic missile. But the Japanese government said that it appeared to be a ballistic missile and splashed into waters outside its exclusive economic zone, according to the country's official Kyodo News. The launch came three days after Kim Yo-jong, sister of North Korean leader Kim Jong-un, said that Pyongyang could declare a formal end to the Korean War as suggested by the South and even discuss the possibility of a summit on conditions that Seoul drops its double standards and hostile attitudes against it. In Seoul, top security officials held an emergency security meeting of the National Security Council (NSC) and voiced regret over the launch. President Moon Jae-in ordered a "comprehensive analysis" of the missile launch and recent statements from the North, his office said. The US Indo-Pacific Command said it is discussing the launch with allies and partners. If the projectile is confirmed to be a ballistic missile, it would mark the third such launch so far this year, and the sixth known major weapons test if test-firings of cruise missiles are taken into account. On September 15, the North test-fired two short-range missiles, believed to be its version of the Iskander, into the East Sea, which came just days after launching a new type of cruise missile. Sources in Seoul said the missile flew shorter than 200 km at an altitude of around 60 km, adding it shows "different features from the missiles the North previously tested". North Korea has released several new types of short-range missiles in recent years amid stalled denuclearization talks with the US, including SLBMs and super-large multiple rocket launchers. /IANS

New Delhi, Sep 27 : About 99 per cent of Indian business travellers aim to resume work trips within the next 12 months, a new study showed on Monday. Over 78 per cent are "very willing" to get b […]

'I am still alive, will tour every district', says Deve Gowda

Bengaluru, Sep 27 : Former Prime Minister H.D. Deve Gowda on Monday said that he is still alive and he would take up a tour of all the districts of Karnataka to strengthen his party, the JD(S). […]