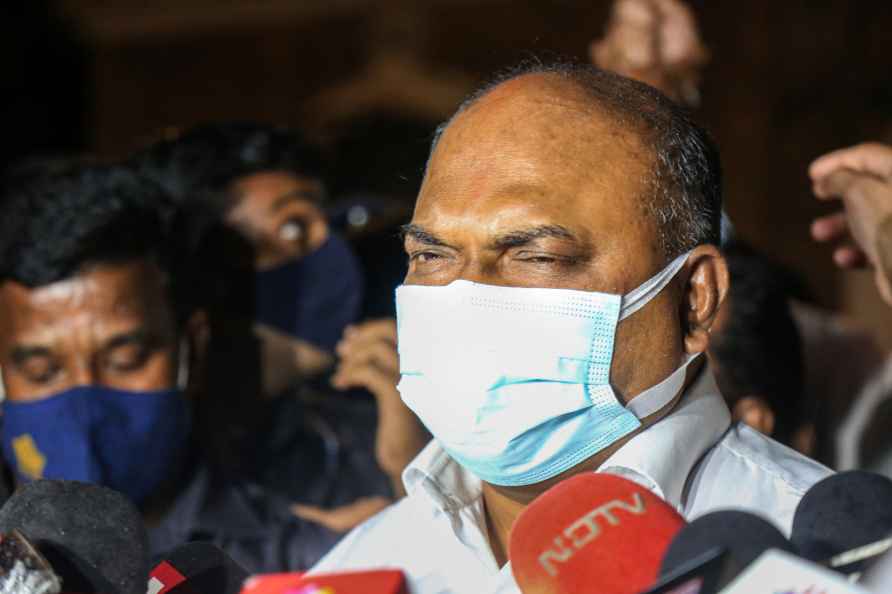 [Mumbai: Maharashtra Transport Minister Anil Parab interacts with the media after appearing before the Enforcement Directorate (ED) for questioning, in Mumbai, Tuesday, Sept. 28, 2021. ( /PTI] Mumbai, Sep 28 : The Enforcement Directorate (ED) on Tuesday summoned and questioned senior Shiv Sena leader and Maharashtra Transport Minister Anil Parab pertaining to the allegations levelled by sacked police official Sachin Vaze. Emerging from the ED office this evening, Parab - appearing weary but unruffled - said that he had replied to all the queries posed by the ED sleuths. "I am answerable to an authority like the ED, not bound to reply to any individuals. If called again, I shall definitely go and cooperate with them," he told the media in a brief interaction. To questions whether the ED was satisfied, Parab said that he was not in a position to comment on this. Vaze, a dismissed Assistant Police Inspector, had levelled allegations of corruption against Parab and former Home Minister Anil Deshmukh in April. The developments came a day after the ED had summoned former Union Minister and Sena MP Anandrao V. Adsul and his son Abhijit A. Adsul in connection with a probe into alleged scam of Rs 900 crore in the City Cooperative Bank Ltd here. Earlier before entering the ED office at around 11 a.m. along with his lawyers, Parab said he has not been informed why he was summoned and asserted that he had not committed any wrongs. Nevertheless, he pointed out that he had reached the ED office to extend his full cooperation to the central probe agency. Earlier this month, Parab had skipped the ED notice to appear before it on the grounds that the reasons for which he was required were not mentioned by the probe agency. /IANS

Why Pratapgarh incident was blown out of proportion?
[Lucknow: UP Chief Minister Yogi Adityanath with State Minister Swati Singh gives smart phone to an Anganwadi worker during a government program, in L

Is Locket Chatterjee now on way to Trinamool Congress?