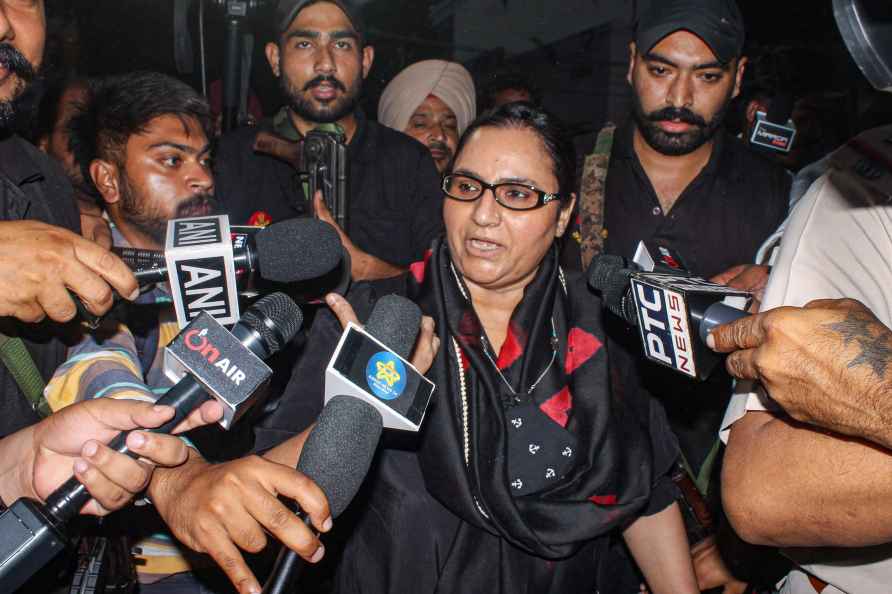 [Patiala: Punjab Cabinet Minister Razia Sultana talks to the media as she arrives to meet Navjot Singh Sidhu after he resigned from the post of Punjab Pardesh Congress President, at his residence in Patiala, Tuesday, Sept. 28, 2021. ( /PTI] New Delhi, Sep 28 : Appointment of a new Chief Minister in Punjab was termed as a masterstroke by the Congress but the party affairs in the state is in a big mess with resignation of Navjot Singh Sidhu from the post of state party chief and former CM Amarinder Singh in Delhi. The Congress quarters were wary as news flashed about Amarinder Singh heading towards Delhi to meet BJP leaders. The party heaved a sigh of relief when Amarinder Singh announced after reaching Delhi that he is here to vacate Kapurthala house and is not going to meet any "politician". In the last ditch effort to pacify Amarinder Singh, the Congress was mulling a strategy to send an emissary but the Congress leadership got blessing in disguise with Punjab president Navjot Singh Sidhu quitting the party president's post. Though Congress was surprised with the move, party spokesperson Pawan Khera said, the party made him the president with much confidence, he can give explanation on the resignation. The Congress affairs in the state is getting messy after the change of the Chief Minister but things did not change as Navjot Sidhu threw his tantrums in the party. The Congress aimed to save its fort in Punjab and desperately needed a united party but ultimately Congress insiders say it's a self goal. Amarinder Singh took potshots minutes after Sindhu's resignation, "I told you so... he is not a stable man and not fit for the border state of Punjab." The Congress is in double jeopardy, how to go about the Punjab Affairs which are getting messy, as the party had called the appointment of Chief Minister Charanjit Singh Channi as masterstroke of Rahul Gandhi. Sidhu announced his resignation on his Twitter handle in just an hour after Channi announced allocation of portfolios to his Cabinet colleagues. In a letter to party President Sonia Gandhi, he wrote, "The collapse of a man's character stems from the compromise corner, I can never compromise on Punjab's future and the agenda for the welfare of Punjab." "Therefore, I hereby resign as the President of the Punjab Pradesh Congress Committee. Will continue to serve the Congress," he added. It is learnt that Sidhu was upset over the non-inclusion of the MLAs of his choice in the expanded Cabinet and the appointment of new Advocate General, A.P.S. Deol. Since his resignation as the Chief Minister, Amarinder Singh has been targeting Sidhu by saying publically that he would fight his elevation to the chief ministership tooth and nail, and is ready to make any sacrifice to save the country from such a 'dangerous man'. /IANS

Big mess in Punjab Congress as Sidhu quits, Amarinder in Delhi
[Patiala: Punjab Cabinet Minister Razia Sultana talks to the media as she arrives to meet Navjot Singh Sidhu after he resigned from the post of Punjab

10-hour shutdown in Punjab, Haryana gets enormous response
Chandigarh, Sep 27 : The 10-hour nationwide shutdown on Monday on the call by farmers' unions to demand scrapping of three Central farm laws got enorm

BJP urges EC to deploy observers on every booth in Bhabanipur
[**EDS: IMAGE MADE AVAILABLE FROM PIB** New Delhi: Union Minister for Commerce & Industry Piyush Goyal releases the publication at the National Worksh

[Patiala: Punjab Cabinet Minister Razia Sultana talks to the media as she arrives to meet Navjot Singh Sidhu after he resigned from the post of Punjab Pardesh Congress President, at his residence in P […]

Thane: Women walk under an umbrella during rains due to cyclone ...

Chandigarh, Sep 27 : The 10-hour nationwide shutdown on Monday on the call by farmers' unions to demand scrapping of three Central farm laws got enormous response in Punjab and Haryana where tens of t […]