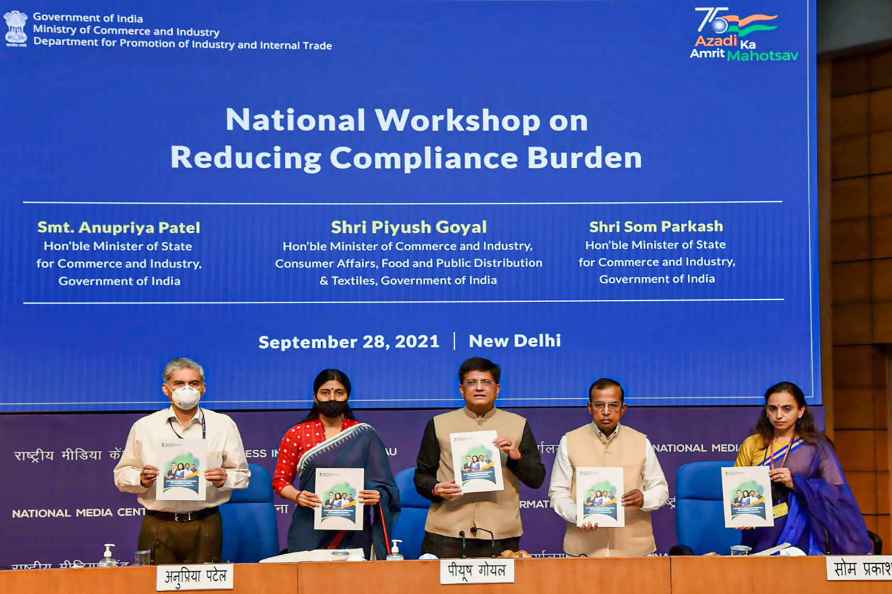 [**EDS: IMAGE MADE AVAILABLE FROM PIB** New Delhi: Union Minister for Commerce & Industry Piyush Goyal releases the publication at the National Workshop on ?Reducing Compliance Burden and Citizen Activities?, organised by the DPIIT, in New Delhi, Tuesday, September 28, 2021. Ministers of State for Commerce & Industry Som Parkash and Anupriya Patel are also seen. ( /PTI] New Delhi, Sep 28 : In the wake of Monday's violence in Bhabanipur from where West Bengal Chief Minister Mamata Banerjee is contesting, a BJP delegation on Tuesday met Election Commission of India and demanded to deploy micro-observers and 40 companies of Central Armed Police Force (CAPF) to ensure free and peaceful elections. A BJP delegation comprising Union Ministers Bhupender Yadav, Mukhtar Abbas Naqvi, Anurag Thakur and party leader Om Pathak met the poll body. After meeting ECI, Yadav said, "We told the ECI that violence and elections in West Bengal have become synonymous with each other. Didi and her party workers have more faith in violence than the elections. Yesterday, the way our party national vice president Dilip Ghosh was attacked showed that TMC and its state government have taken violence as democracy." "The BJP has demanded ECI to take strict action against concerned officials for failure to act. The EC had sought a report from the state government in which they had said that eight persons were arrested but we believe it was an attempt to cover up the incident." The BJP demanded deployment of micro-observers to ensure that every single booth is supervised by officials from organizations other than those of state government and deployment of at least 40 CAPF companies or more in Bhabanipur assembly constituency to ensure that every booth is covered by central forces. "Local state police or their home guards or any variant thereof must not be deployed for poll duty," the BJP said. The BJP further demanded imposition of Section 144 on September 30, on the day of polling and ensure strict compliance thereof by the central forces. "Special attention be paid to the well-being of the persons in high rise buildings, as such areas often are targeted for intimidation by Trinamool Congress. Round up rowdy and anti-social elements. List of such booths, areas and elements has been submitted to the local officers," the BJP said. The BJP also requested the ECI to "ensure that every booth, especially in ward 77 and certain pockets in ward 63 and 82, has deployment of three or four women security personnel to check identity of burqa clad women." Form 20 that publishes election related statistics and data, should not be made public for the next one year so as innocent voters are protected from the wrath of the AITC and its agents and also from the state government that is more of an extension of the party, rather than a constitutional body," the BJP added. /IANS

BJP urges EC to deploy observers on every booth in Bhabanipur
[**EDS: IMAGE MADE AVAILABLE FROM PIB** New Delhi: Union Minister for Commerce & Industry Piyush Goyal releases the publication at the National Worksh

Mumbai, Sep 27 : Actor Pratik Gandhi's film 'Bhavai', which was scheduled to hit the screens on October 1, has got a new release date. The movie will now be released on October 22. The move come […]

BJP urges EC to deploy observers on every booth in Bhabanipur

New Delhi, Sep 27 : The Supreme Court on Monday said that the police officers, who cosy up with the government of the day and also make money through wrong channels, face payback after the change in t […]