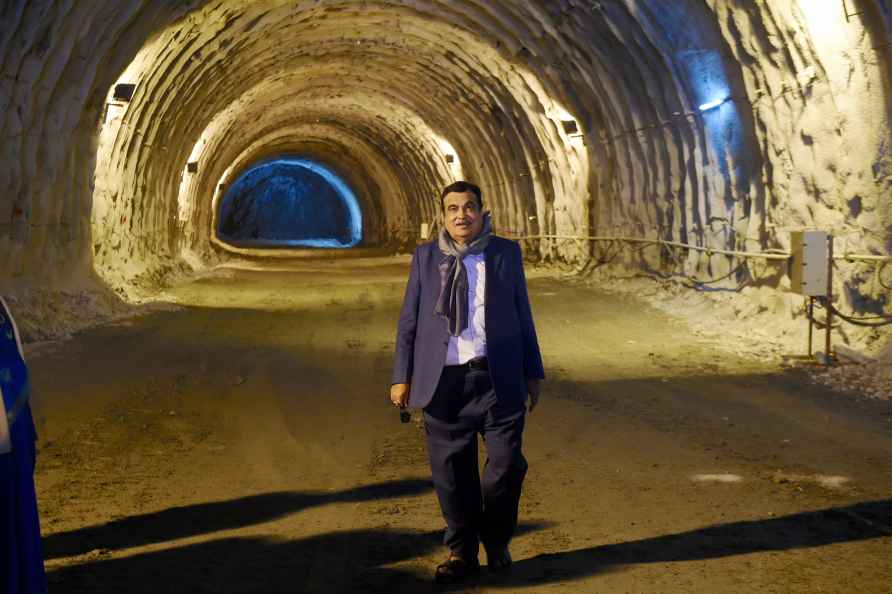 [Baltal: Union Minister for Road Transport and Highways Nitin Gadkari reviews and inspects the work on Zojila and Z Đ Morh tunnels, in Baltal, Tuesday, Sept. 28, 2021. The minister is on a two-day visit to the Union territory of Jammu & Kashmir. ( /PTI] Srinagar, Sep 28 : Union minister for roads and highways, Nitin Gadkari on Tuesday directed that both the Zojila and the Z-Morh tunnels in J&K should be completed before the 2024 Lok Sabha elections. Gadkari on Tuesday visited the Zojila and the Z-Morh tunnels whose completion would make the Srinagar-Leh highway an all-weather road. At present, the cold desert Ladakh union territory remains cut off from the rest of the country for months because of heavy snowfall on the Zojila Pass. Gadkari expressed satisfaction over the construction work at the Zojila tunnel and said that he has directed the authorities to complete the tunnels before the 2024 parliamentary election. "I am satisfied with the speed of construction and have told the authorities to complete the construction of the tunnels before May 2024, so that we can show the opposition what we have achieved", Gadkari said while addressing a press conference. Gadkari said that projects costing Rs one lakh crore are currently being implemented in Jammu and Kashmir. "Among all the projects, six of them are the most important ones for the socio-economic development of Jammu and Kashmir", he said. Gadkari said after the Bharatiya Janata Party (BJP) took over the government in 2019, the national highway has been lengthened from 1695 km to 2664 km. "There has been an increase of 969 km in the national highway," he said. The Zojila and Z-Morh tunnels are part of a 18-km long approach road to Zojila west portal. Addressing the media, settlement engineer Burhan Ahmad said that NHIDCL is geared up to continue the work on the Zojila tunnel in the winter months. Prashant Kumar (DGM) while talking to reporters said that the tunnel has historical significance and the government is working on the project since the last 20 years. "Without wasting a day, we are working round the clock to complete the project before the scheduled date to connect the people of J&K with Drass area of Ladakh UT round the year," Kumar said. Once completed, the Zojila tunnel will be India's longest road tunnel and Asia's longest bi-directional tunnel. Several bridges are being constructed along this route and a connecting tunnel from Z-Morh in National Highway-1 to Zojila tunnel will be constructed in the Zojila Ghats between Sonamarg and Kargil. The entire work is divided into two divisions in the 33 km span. The project site of Zojila tunnel is located at existing highway (NH-01) starting from Sonamarg (UT of J&K) and ending at Minimarg (UT of Ladakh) at an elevation ranging from 2700m to 3300m. The present site falls in seismic zone IV and all precautionary measures have been taken to safeguard the tunnels. /IANS

New Delhi, Sep 27 : After Panchjanya, a journal with RSS leanings, launched an attack on Jeff Bezos founded Amazon, with a cover story calling it the second generation of the East India Company that e […]

Nitin Gadkari wants Zojila, Z-Morh tunnels to be ready by 2024

[Baltal: Union Minister for Road Transport and Highways Nitin Gadkari reviews and inspects the work on Zojila and Z Đ Morh tunnels, in Baltal, Tuesday, Sept. 28, 2021. The minister is on a two-day vi […]

IPL 2021 playoffs: Mumbai Indians not 'out' yet! Still have a chance

New Delhi, Sep 27 : Ever since Mumbai Indians suffered a humiliating defeat at the hands of Royal Challengers Bangalore in their IPL game in Dubai, questions are arising in everyone's mind -- 'is it e […]