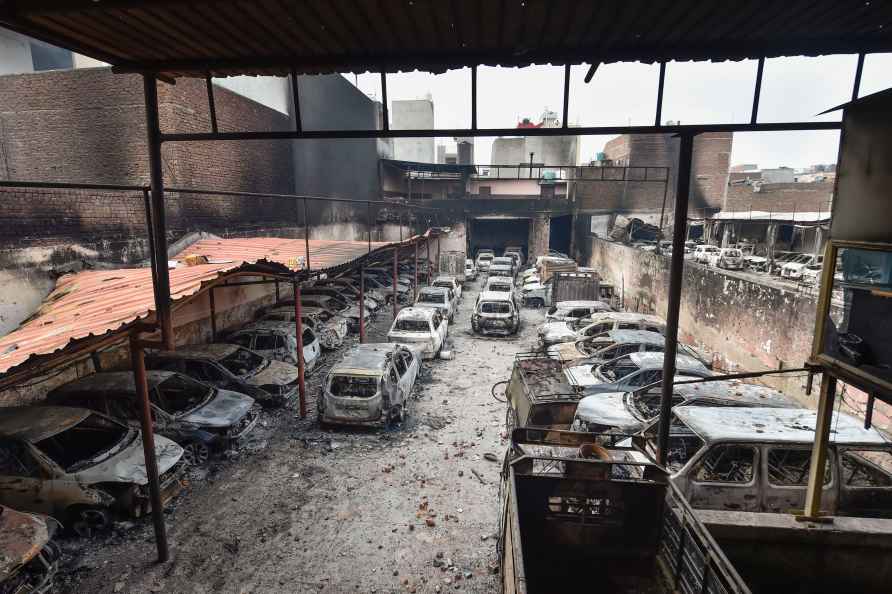 [**EDS: FILE IMAGE** New Delhi: File image dated, Wednesday, Feb. 26, 2020, of charred remains of vehicles set ablaze by rioters during communal violence over the amended citizenship law at Shiv Vihar area of the riot-affected north east Delhi. The Delhi High Court on Monday, Sept. 27, 2021, said that the riots were a pre-meditated conspiracy to disturb law & order in the city. ( /PTI] New Delhi, Sep 28 : The Delhi High Court has said the last year's riots did not take place on the spur of the moment, rather it was a "pre-planned" and "premeditated" conspiracy to disturb law and order in the capital. The three-day violence left over 50 dead and hundreds injured. The high court made these observations while dealing with a bail application moved by one Mohd. Ibrahim in a case connected with the alleged murder of Delhi Police head constable Ratan Lal. The high court declined to grant bail to the accused in the matter, stating that the available video footage showing the petitioner with the sword was "quite egregious" and sufficient to keep him in custody. Ibrahim was arrested in December 2020 and has been in judicial custody since then. Justice Subramonium Prasad noted that there was systematic disconnection and destruction of the CCTV cameras in the areas near the place of the incident. The court noted the riots, which shook the national capital in February 2020, evidently did not take place in a spur of the moment, rather it was a conspiracy, planned and executed. The court added, "innumerable rioters ruthlessly descended with sticks, dandas, bats, etc. upon a hopeless outnumbered cohort of police officials". The court noted the conduct of the protesters, who were present on the video footage, placed on record by the prosecution, visibly portrays that it was a calculated attempt to dislocate the functioning of the government, and also disrupt the normal life of the people. The court said in the video footage submitted by the prosecution, it was clear from the conduct of the protesters that the riots were a planned attempt to disrupt normal life and the functioning of the government. While acknowledging the importance of personal liberty in a democratic polity, the court clarified that "individual liberty cannot be misused in a manner that threatens the very fabric of civilized society by attempting to destabilise it and cause hurt to other persons". "The systematic disconnection and destruction of the CCTV cameras also confirms the existence of a pre-planned and premeditated conspiracy to disturb law and order in the city," said Justice Prasad. Denying bail to Ibrahim, the court said he was identified on multiple CCTV footages, carrying a sword and instigating the crowd and the clinching evidence is sufficient for his incarceration. The court noted that the weapon carried by him was capable of causing grievous injuries and/or death, and is prima facie a dangerous weapon. In a separate order, the court granted bail to one Saleem Khan, due to absence of any material to show that he was a part of the unlawful assembly at the crime scene. /IANS

ISL: SC East Bengal hoping for a reversal of fortune in game vs Chennaiyin FC
[Goa: Lallianzuala Chhangte of Chennaiyin FC tries to get past the defense during match 16 of season 8 of Indian Super League played between Chennaiyi

Bamako, Dec 4 : A terrorist attack at Songho Gare, a small town between Sevare and Bandiagara in central Mali, claimed dozens of lives, a local official and witnesses said. According to witnesse […]

Kerala teachers, non-teaching staff given a week's time to get jabbed

Thiruvananthapuram, Dec 4 : Kerala Education Minister V. Sivankutty who has been speaking tough of strong action against those government teachers who are yet to take Covid vaccine, appears to have yi […]