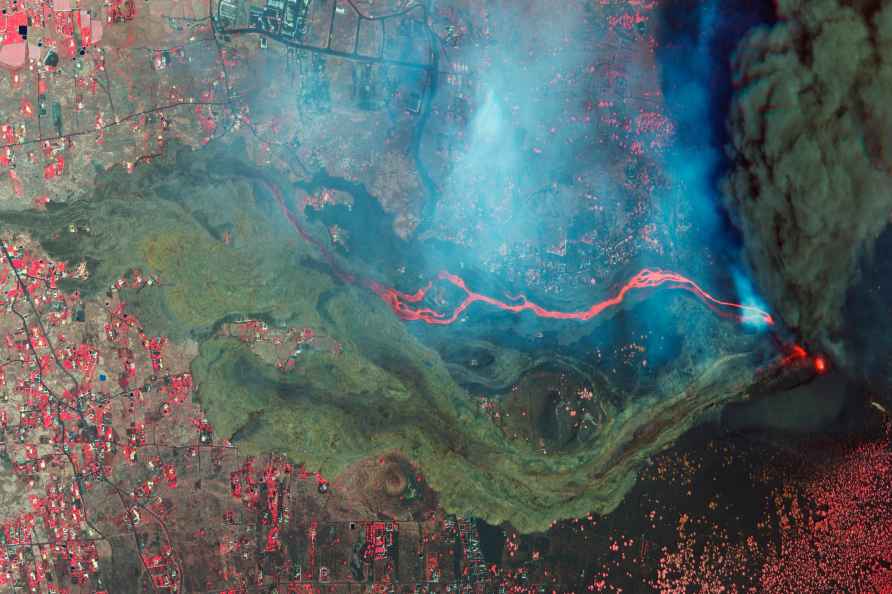 [La Palma: In this Sunday, Sept. 26, 2021 satellite photo from Planet Labs Inc. lava and ash from a volcano on the Canary island of La Palma, Spain can be seen. A Spanish island volcano that has buried more than 500 buildings and displaced over 6,000 people since last week lessened its activity on Monday, although scientists warned that it was too early to declare the eruption phase finished and authorities ordered residents to stay indoors to avoid the unhealthy fumes from lava meeting sea waters. /PTI] By Arul Louis New York, Sep 28 : US President Joe Biden's remarks to Prime Minister Narendra Modi disparaging the US press and calling the Indian reporters "better behaved" has riled up the US media. As they sat down for their meeting on Friday and before reporters were ushed into the Oval Office, Biden was recorded on video telling Modi, "I think what we're going to do is bring in the press. The Indian press is much better behaved than the American press. I have to watch out." He added, "I think, with your permission, we could not answer questions because they won't ask any questions on point." Reporters raised the remarks on Monday with Biden's Spokesperson Jen Psaki, who defended her boss saying he didn't mean to be a hard on them. But she pointed out that the US reporters tend to ask questions unrelated to the topic he is talking about. Psaki said, "I think what he said is that they're not always 'on point.' Now, I know that isn't something that anyone wants to hear in here. But what I think he was conveying is, you know, today, he might want to talk about COVID vaccines; some of the questions were about that. He might want to talk about... and some of the questions are not always about the topic he's talking about on that day. I don't think it was meant to be a hard cut at the members of the media people he has taken questions from today and on Friday as well." Another reporter objected to the comparison between Indian and US media. She said, "The Indian press is ranked 142nd in the world, according to Reporters Without Borders, for press freedoms. How does he say that about the US press compared to the Indian press?" Psaki defended Biden's commitment to a free press globally and also mentioned the number of times he has spoken to the media as president. She said, "Having now worked for the President -- serving in this role for nine months, having seen that he's taking questions from the press more than 140 times, including today and Friday -- that he certainly respects the role of the press, the role of the freedom of free press." "We ensure that we have press with us, of course, when we travel; that we have press with us for sprays in foreign -- in foreign capitals; and we will continue to. And I think that should speak to his commitment to freedom of press around the world," she added. The France-based Reporters Without Borders index is often cited by some in the Indian media and by western organisations as an authoritative ranking. In fact, it is only an unscientific opinion poll of pre-selected persons that produces some bizarre rankings. The US is itself ranked at 44, below Burkina Faso, and Gabon. A more thorough study by Freedom House lists those two countries as "Not Free". Even western countries like Britain and Germany that are listed above the US have more restrictive media laws and censorship in some cases. Biden has criticised reporters as being "negative". After his meeting with Russian President Vladimit Putin in Geneva in June, he told US reporters, "Look, to be a good reporter, you've got to be negative. You've got to have a negative view of life, it seems to me," Biden told reporters. "You never ask a positive question." Modi does not hold open news conferences and face the media like Biden. Biden has a prepared list of reporters that he calls up at his news conferences and refers to notes as he answers, although he also sometimes calls up reporters spontaneously. He also has spontaneous encounters when he chooses to after making a statement or when he is going to someplace. A rotating group of reporters and other media staff put on a roster by the White House Correspondents Association always tails the president and shares its reports with the rest of the media. Biden's media crew tries to limit his media encounters to avoid any remarks that may go off the script and cause problems or embarrassment. Biden's media encounters are in sharp contrast to that of his predecessor Donald Trump who was more spontaneous -- but sometimes produced gaffes, dubious facts and muddled policy pronouncements. Trump had a very hostile relationship with most of the US media and this often erupted in personal attacks by both sides. Trump also gave the Indian media backhanded when he met with Modi in 2019. "You have great reporters, I wish I had reporters like this. You are doing better than anybody else. Where do you find these reporters? This is a great thing," he told Modi after Indian reporters shot several questions about Pakistan and terrorism. He appeared to consider their line of questioning supportive of Modi and patriotic, unlike the US media which was highly critical of him and his policies. (Arul Louis can be reached at arul.l@ians.in and followed @arulouis) /IANS

US media riled by Biden comments criticising it during Modi meeting
[La Palma: In this Sunday, Sept. 26, 2021 satellite photo from Planet Labs Inc. lava and ash from a volcano on the Canary island of La Palma, Spain ca

As Hasina turns 75, B'desh govt to mark occasion by vaccinating 80 lakh
[Montgomery: Rep. Kenyatte Hassell is sworn in during the beginning of a special session in the house of representatives on a $1.3 billion prison cons

US media riled by Biden comments criticising it during Modi meeting

[La Palma: In this Sunday, Sept. 26, 2021 satellite photo from Planet Labs Inc. lava and ash from a volcano on the Canary island of La Palma, Spain can be seen. A Spanish island volcano that has burie […]

Need to take modern agri-science and technology to every village; steps been taken in National Education Policy: PM Modi.

Need to take modern agri-science and technology to every village; steps been taken in National Education Policy: PM Modi. […]

Zhuhai:Invited guests and military officers walk past the J-16D on display during the 13th China International Aviation and Aerospace Exhibition, also known as Airshow China 2021, on Tuesday, Sept. 28 […]

Need to enhance use of modern drones and sensors to get high quality farm data and real time solutions: PM Modi.

Need to enhance use of modern drones and sensors to get high quality farm data and real time solutions: PM Modi. […]