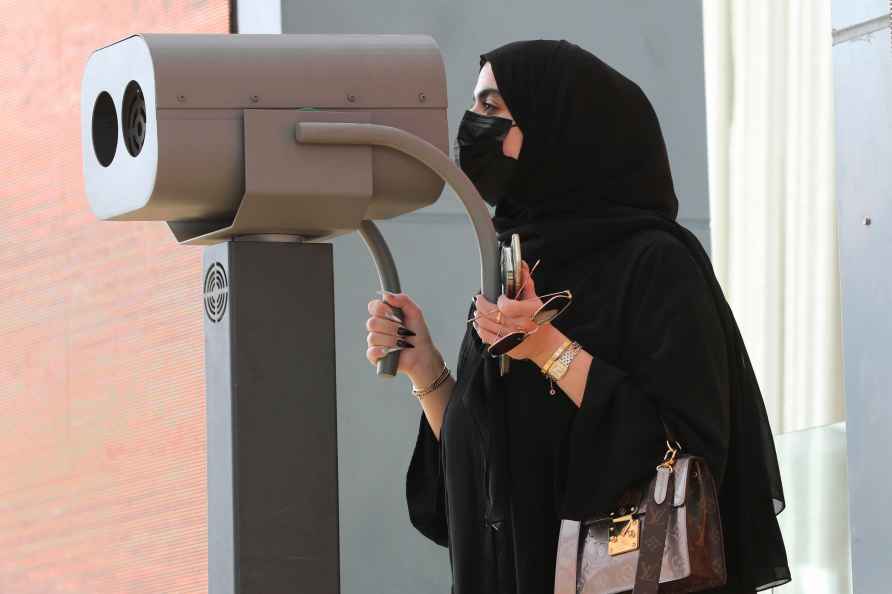 [Dubai; A journalist watch through a binocular during a media tour of the Israeli pavilion at the Dubai Expo in Dubai, United Arab Emirates, Monday, Sept. 27, 2021. Delayed a year over the coronavirus pandemic, Dubai's Expo 2020 opens this Friday. It will put this city-state all-in on its bet of billions of dollars that the world's fair will boost its economy. /PTI] By Nishant Arora New Delhi, Sep 28 : The two big-ticket investments in India this year -- Tesla and Apple -- which were set to lift the country as a brand on the world map and further end dependence on China-led investments in the tech and auto sectors, has somewhat been delayed owing to the pandemic and global chip shortage. Nonetheless, both the giants now aim to rewrite their India manufacturing story next year as Covid slows down. Both Elon Musk and Tim Cook had announced a big-bang entry into the country. Musk wanted his electric cars to run on the domestic roads (despite import duty concerns) while Cook announced to open first branded retail store (in Mumbai), along with a thrust on assembling/manufacturing more Apple products in the country. However, the second Covid-19 wave and a severe automobile semiconductor shortage have somewhat hampered their plans for the year. According to Soumen Mandal, research analyst (IoT, automotive and devices ecosystem) at Counterpoint Research, India is believed to become one of the largest EV markets soon and Tesla is aware of this fact. "None of the big automakers wants to leave out the opportunity to acquire a share in the India market. Tesla is not an exception in this case. The cheap availability of resources and lower labour cost will allow Tesla as well as other automakers to earn a higher profit if they set up a local manufacturing or assembly plant," Mandal told IANS. The government wants Tesla to either start local manufacturing or assembly plant before getting any import tax concession. "Hence, the desire to earn more profit as well as the wish to acquire a market share in one of the to-be largest auto markets is bringing Tesla to India," he added. This microchip shortage has badly affected the automotive industry, which has increasingly become a big consumer of microchips. When most automakers are predicting that this chip shortage will go through 2023, Tesla CEO Elon Musk says that things will turn positive from 2022. "All most every automaker is currently suffering from the ongoing semiconductor shortage. While most of the automakers like Stellantis, Volkswagen, Toyota, BMW, Ford and others have cut production severely due to the ongoing chip crisis, Tesla has not been affected significantly," said Mandal. The Indian passenger car market is mostly dominated by cars priced below Rs 10 lakh, whereas the current Model 3 of Tesla costs (about Rs 29 lakh without import and other taxes) put the car in the premium segment, and the market share of the premium segment in the country was just 7 per cent in 2020. Presently, India is under the global spotlight due to the production-linked incentive (PLI) scheme. Under the scheme, the foreign manufacturers can acquire resources at very nominal cost only if they set up manufacturing or assembly plant, locally. The PLI scheme has been extra generous towards electric vehicles and its components like batteries because India is already running behind in EV adoption and wants to put a significant number of EVs on road by 2030. The pandemic has also forced the iPhone maker from opening its own offline store to its fans in India this year. It opened its own online store before the festive season last year, which has seen a tremendous success. "The retail store continues to be a key fulcrum for Apple's growth in India. It will steer Apple products availability, accessibility and affordability in the country," said Prabhu Ram, Head, Industry Intelligence Group (IIG), CyberMedia Research (CMR). The consumer demand for the new iPhone 13 series is robust in the country. The iPhone 13 series, for which pre-orders were thrown open in India last week, received a record response like last year from fans across the country. "However, the current supply chain dynamics is causing some constraints for Apple Watch as well as the iPhones. We believe that Apple is slightly better placed in augmenting its supplies over the coming quarters, and meet the strong demand," Ram told IANS. (Nishant Arora can be reached at nishant.a@ians.in) /IANS

As Hasina turns 75, B'desh govt to mark occasion by vaccinating 80 lakh
[Montgomery: Rep. Kenyatte Hassell is sworn in during the beginning of a special session in the house of representatives on a $1.3 billion prison cons

Japan to end Covid emergency measures on Thursday
[Tokyo: Japanese Prime Minister Yoshihide Suga speaks to reporters about lifting of a state of emergency at his official residence in Tokyo Monday, Se

Need to step up efforts to tackle challenges of climate change: PM.

Need to step up efforts to tackle challenges of climate change: PM. […]

[Dubai; A journalist watch through a binocular during a media tour of the Israeli pavilion at the Dubai Expo in Dubai, United Arab Emirates, Monday, Sept. 27, 2021. Delayed a year over the coronavirus […]