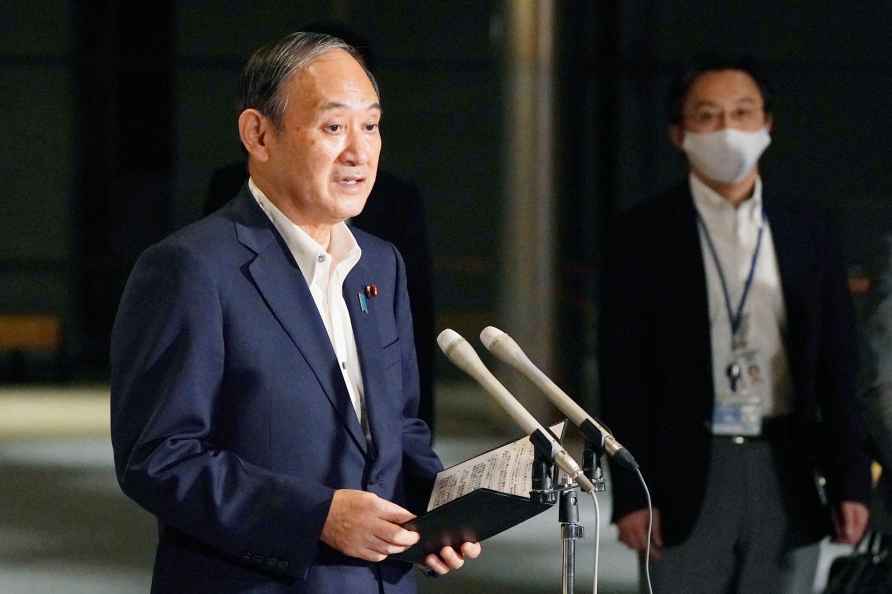 [Tokyo: Japanese Prime Minister Yoshihide Suga speaks to reporters about lifting of a state of emergency at his official residence in Tokyo Monday, Sept. 27, 2021. Suga is expected to announce on Tuesday, Sept. 28, 2021 a lifting of the ongoing coronavirus state of emergency and less-stringent measures in all 27 prefectures including Tokyo when they expire at the end of September as the infections slow and the nation tries to reactivate its economy. /PTI] Tokyo, Sep 28 : The Japanese government will end the Covid-19 state of emergency covering Tokyo and 18 prefectures and a quasi-state of emergency for eight regions, on Thursday, as the number of new cases has declined steadily. Prime Minister Yoshihide Suga said his government would make a formal decision on Tuesday by taking into consideration the opinions of a panel of experts in infectious diseases and other fields, reports Xinhua news agency. If the decision takes place formally, it would be the first time since April 4 that none of the country's 47 prefectures would be under either a state of emergency or a quasi-state of emergency. "The number of new Covid-19 patients has drastically decreased, so I understand the situation has been improving in that sense," Suga told reporters after a meeting with his Cabinet on Monday. However, "we must continue to be highly cautious and need to ease restrictions gradually, including for dining". Under the state of emergency, establishments serving alcohol or offering karaoke services are asked to suspend their business, and those not serving liquor are requested to close at 8 p.m. Due to a resurgence of Covid-19 infections, the fourth state of emergency was declared for Tokyo on July 12, covering the full period of Olympics and Paralympics and resulting in allowing few to no spectators at the games' venues. The spread of the highly contagious Delta variant accelerated the surge in cases across the country. In August, the nationwide daily infections peaked at about 25,000, and many other areas entered the emergency measure. However, daily infections have declined steadily in recent days. Since the onset of the pandemic early last year, Japan has so far reported 1,694,675 confirmed Covid-19 cases and 17,482 deaths. /IANS

Japan to end Covid emergency measures on Thursday
[Tokyo: Japanese Prime Minister Yoshihide Suga speaks to reporters about lifting of a state of emergency at his official residence in Tokyo Monday, Se

NASA to launch 1 Earth-observing satellite, 4 CubeSats on Monday
[Vandenberg Space Force Base : This photo provided by NASA shows the United Launch Alliance Atlas V rocket with the Landsat 9 satellite onboard at Van

[Tokyo: Japanese Prime Minister Yoshihide Suga speaks to reporters about lifting of a state of emergency at his official residence in Tokyo Monday, Sept. 27, 2021. Suga is expected to announce on Tues […]

Chennai, Sep 27 : Bharat Bandh called by the Samyukt Kisan Morcha and supported by the ruling DMK in Tamil Nadu turned out to be a damp squib with the public not responding at all to the shutdown-call […]