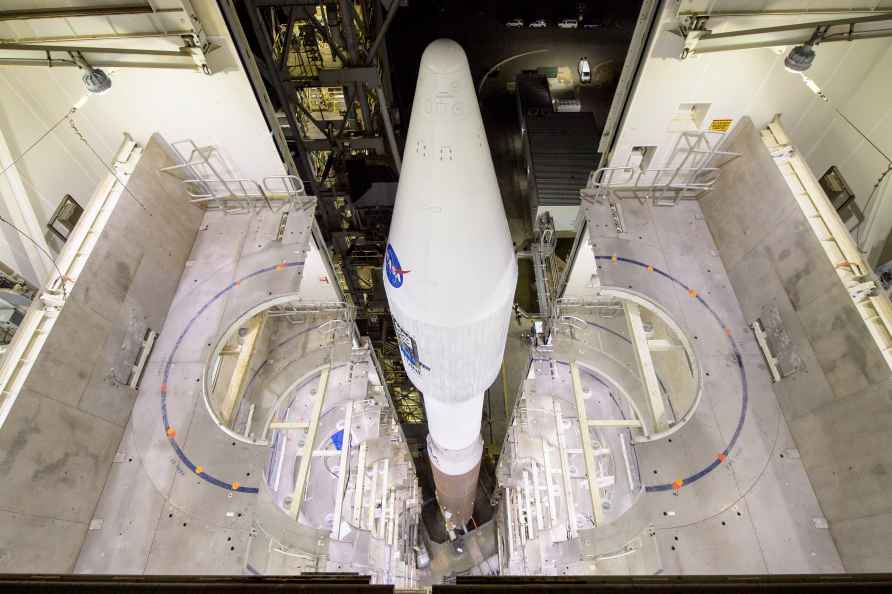 [Vandenberg Space Force Base : This photo provided by NASA shows the United Launch Alliance Atlas V rocket with the Landsat 9 satellite onboard at Vandenberg Space Force Base, Calif., on Monday, Sept. 27, 2021. A project of NASA and the U.S. Geological Survey, Landsat 9 will work in tandem with a predecessor, Landsat 8, to extend a nearly 50-year data record of land and coastal regions that began with the launch of the first Landsat in 1972. /PTI] Washington, Sep 27 : US space agency NASA has cleared the launch of Landsat 9, a powerful Earth-observing satellite, and four tiny satellites on Monday. The Landsat 9 satellite is a joint NASA and US Geological Survey (USGS) mission that will continue the legacy of monitoring Earth's land and coastal regions that began with the first Landsat satellite in 1972. Landsat 9 is scheduled to launch at 2.11 p.m. EDT (11.41 p.m. India time) on Monday, on a United Launch Alliance (ULA) Atlas V 401 rocket from Space Launch Complex 3 at Vandenberg Space Force Base in California. The rocket will take Landsat 9 to its orbit 438 miles above Earth, NASA said in a statement. Landsat 9 will join its sister satellite, Landsat 8, in orbit in collecting images from across the planet every eight days. This calibrated data will continue the Landsat programme's critical role in monitoring the health of Earth and helping people manage essential resources, including crops, irrigation water, and forests. The four CubeSats, miniature satellites, will also be launched on the same Atlas V rocket. While some of the missions sport adorable names, they're dubbed CUTE (Colorado Ultraviolet Transit Experiment), CuPID (Cusp Plasma Imaging Detector), and Cesium Satellites 1 and 2 -- these little satellites are pioneering some serious science and technology, NASA said. The four CubeSats will be mounted on a ring-shaped frame, called the ESPA (Evolved Expendable Launch Vehicle Secondary Payload Adapter). The ESPA will ride with Landsat 9 inside the top section of the rocket, the payload fairing. After the rocket's second stage, called the Centaur, safely boosts Landsat 9 to its orbit, it will drop to a lower orbit and send the CubeSats on their way, NASA said. The CuPID will study the boundaries of Earth's magnetic field, to see how energy from the Sun can break through our planet's magnetic shield, while the CUTE will train its telescope on planets outside our solar system to study how quickly their atmospheres are escaping. Cesium Satellites 1 and 2 are experimental satellites owned by CesiumAstro -- an aerospace company that specialises in space communications. These CubeSats will test an antenna technology called an active phased array, which uses electromagnetic interference to move a signal beam without moving the physical antenna. This technology could make future satellites easier to use and repair, with fewer moving parts to break down. /IANS

NASA to launch 1 Earth-observing satellite, 4 CubeSats on Monday
[Vandenberg Space Force Base : This photo provided by NASA shows the United Launch Alliance Atlas V rocket with the Landsat 9 satellite onboard at Van