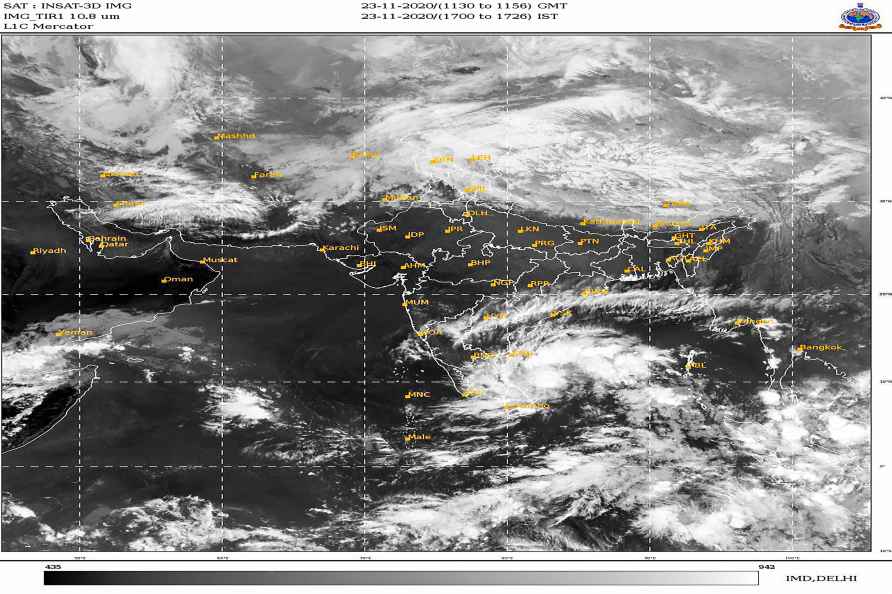 New Delhi, Sep 26 : As the cyclonic storm 'Gulab' formed in the Bay of Bengal is expected to make landfall between north Andhra Pradesh and south Odisha coast by late Sunday evening, the Eastern Naval Command and Naval Officers-in-Charge Odisha area have carried out preparatory activities to combat the possible effects. "The Indian Navy is closely monitoring the movement of the Cyclonic Storm and is in constant liaison with the state administrations for rendering assistance as required," a release from the Ministry of Defence said. As part of the preparedness, Flood Relief Teams and Diving Teams have already been positioned at Odisha and are ready at Visakhapatnam to render immediate assistance. Two Naval ships are at sea with Humanitarian Assistance and Disaster Relief (HADR) material and medical teams to render assistance in the most affected areas. Naval aircraft are kept ready at Naval Air Stations, INS Dega at Visakhapatnam and INS Rajali near Chennai to undertake an aerial survey of the most affected areas, casualty evacuation, and airdrop of relief material as required, the release added. The Cyclonic Storm 'Gulab' (pronounced as Gul-Aab) lay centred over west central Bay of Bengal, about 140 kms east-southeast of Gopalpur (Odisha) & 190 kms east-northeast of Kalingapatnam (Andhra Pradesh) at 11.30 a.m. on Sunday, the India Meteorological Department (IMD) said in its bulletin. It is likely to move nearly westwards and cross north Andhra Pradesh - south Odisha coasts between Kalingapatnam and Gopalpur, as a Cyclonic Storm with maximum sustained wind speed of 75-85 kmph gusting to 95 kmph, by mid-night of September 26 and the landfall process will commence late evening. Alerts have been issued for heavy rains, strong winds and surge in tidal waves among other effects of the cyclonic storm. /IANS

Mumbai, Jan 26 : Chandraprakash Dwivedi, who has directed 'Prithviraj' starring Akshay Kumar and Manushi Chhillar, has been conferred with the prestigious Padma Shri award, the fourth-highest civilian […]

Chennai, Jan 26 : Director P.S. VinothRaj's 'Koozhangal' (better known as 'Pebbles'), which was India's official entry to the Oscars this year, has won the award for the Best Film at the 20th Dhaka In […]