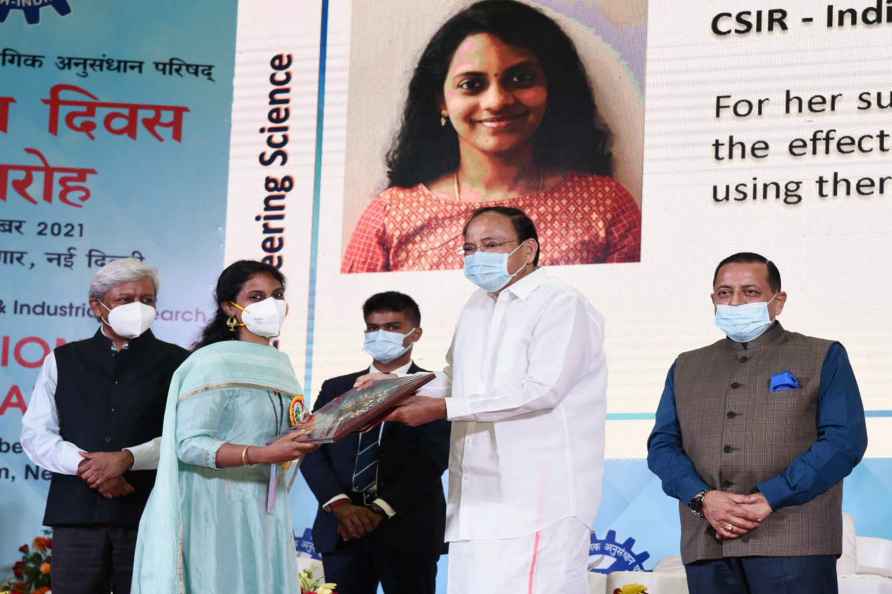 [**EDS: HANDOUT PHOTO MADE AVAILABLE FROM VP OFFICE** New Delhi: Vice President, M. Venkaiah Naidu at the 80th Foundation Day celebrations of Council of Scientific and Industrial Research (CSIR) in New Delhi on Sunday, September 26, 2021. ( /PTI] New Delhi, Sep 26 : Vice President M. Venkaiah Naidu on Sunday advised the Council of Scientific and Industrial Research (CSIR) to reinvent itself and turn futuristic while pursuing the science of the highest order. Participating in the CSIR's 80th Foundation Day celebrations here, he said that he wanted CSIR laboratories and institutes to address challenges that require long-term scientific and technological solutions. Citing climate change, drug resistance, pollution, epidemic and pandemic outbreaks, among the challenges that need the focus of the scientific community, Naidu said: "I want CSIR to bestow greater attention on agricultural research and come out with new innovations, techniques and solutions to address the problems faced by farmers." Union Science and Technology and Earth Sciences Minister Jitendra Singh asked the CSIR and all the science departments to explore S&T innovations needed in the next ten years to make India globally competitive, a Science and Technology Ministry release said. As the nation is celebrating the Azadi ka Amrit Mahostav, the combined strength of the CSIR, Department of Bio-Technology, Department of Science and Technology, and Ministry of Earth Sciences, along with other science ministries, can indeed transform the entire country in the next 25 years as the entire progress is going to remain heavily technology-dependant, he said, adding, 25 years later, India should be a global leader ranging from defence to economics with strong scientific and technological inputs." Lauding the 80-year successful journey of CSIR, he said that it is heartening to see the evolution of the CSIR from developing India's first indelible ink used in elections to providing Indian Standard Time using atomic clocks today. From the development of Swaraj Tractor to the recent test flying of HANSA-NG is a testament to the growth of CSIR in the last eight decades, he added. The legacy of CSIR is built on the cumulative contributions of its many national laboratories and institutes, he said, adding that each laboratory is unique and specialising in diverse areas as genomics to geology, material technology to microbial technology and food to fuel. He also recalled that how the laboratories came together during the Covid pandemic last year and developed several technologies that helped India's fight against it. Singh congratulated all the scientists, researchers and students who won the prestigious Shanti Swaroop Bhatnagar Prizes and said that the accolades will further motivate the recipients to continue their excellent work and inspire those around them, the release said. Principal Scientific Adviser to the Government, Professor K VijayRaghavan, CSIR Director General CSIR Shekhar Mande, Head, CSIR-HRDG, Anjan Ray, and senior scientists and officials were present, the release added. /IANS

New Delhi, Oct 26 : When the Virat Kohli-led Indian cricket team take field against New Zealand in the ongoing Men's T20 World Cup on Sunday, they will aim to leave the ghosts of poor records versus B […]

Bhopal, Oct 26 : Karan Morwal, the son of a Congress MLA from Madhya Pradesh, who was absconding for over six months after a woman lodged a rape case against him, was arrested on Tuesday, police said. […]

Beirut, Oct 26 : A top UN official has urged the ebanese Armed Forces and the Israeli Defense Forces to respect the sanctity of the Blue Line, a border demarcation between the two nations published by […]

Blue Origin to build a private space station by 2030