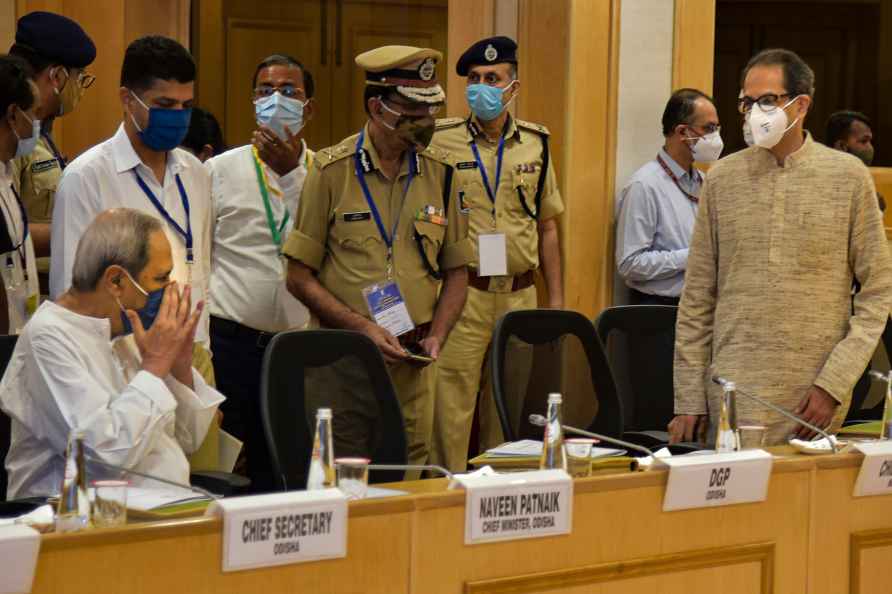 [New Delhi: Odisha CM Naveen Patnaik and Maharashtra CM Uddhav Thackeray participate in a high-level meeting chaired by Union Home Minister Amit Shah (unseen) with Chief Ministers of ten Naxal-hit states, at Vigyan Bhawan in New Delhi, Sunday, Sep 26, 2021. ( /PTI] New Delhi, Sep 26 : The Centre on Sunday held a high-level meeting with the states affected by Left-wing extremism (LWE) to review the situation. Union Home Minister Amit Shah chaired the review meeting with the chief ministers and police chiefs of these states in the national capital. Chief minister of Madhya Pradesh Shivraj Singh Chouhan, Bihar's Nitish Kumar, Telangana CM K. Chandrashekhar Rao, Jharkhand's Hemant Soren, Maharashtra's Uddhav Thackeray and Odisha CM Naveen Patnaik were present in the meeting held at Vigyan Bhawan here. The Chief ministers of Chhattisgarh, Andhra Pradesh, Kerala and West Bengal did not attend the review meeting. Sources said that Shah talked about the need to formulate a new strategy to take decisive actions against these ultras. The meeting is being held in two sessions. In the first session operational strategy to effective domination in the affected districts was discussed and states were asked to extend cooperation in anti-Maoist operations. In the second session, discussion on the execution of the developmental schemes in all affected states was being held. It is learnt that in the meeting it was flagged that some states are not cooperating with the Centre in the fight against LWE due to their local issues. "Centre has sought more cooperation from the states to fight against the ultras in a calibrated manner," sources said. Odisha Chief Minister Patnaik requested the Union government to consider four laning of road NH 326 from Jeypore to Motu via Malkangiri, providing railway network in LWE affected districts, which are not part of it, providing mobile connectivity to areas of southern and western parts of states and providing banking facilities in these districts. Sources claimed that Maharashtra Chief Minister Thackeray demanded additional central assistance for these districts for strengthening the policing network and to carry out development works. It is further learnt that in the second session, the progress of the various infrastructural developmental schemes such as road requirement and connectivity, and also of aspirational districts programmes in the LWE affected districts were being discussed. Chief Ministers and police chiefs of 10 affected states -- Chhattisgarh, Madhya Pradesh, Odisha, Jharkhand, Bihar, West Bengal, Andhra Pradesh, Telangana, Maharashtra and Kerala were invited for the review meeting, but a few of them did not attend it for different reasons. /IANS

8 dead in Houston music festival stampede
[Houston: The Astroworld site is vacant early Saturday, Nov. 6, 2021 after several were killed during surges in the crowd at the Travis Scott perfor

'Bhai-dooj' horror: Maha hospital blaze toll shoots up to 10
[Ahmednagar: Injured patients being shifted to safer place after a fire broke out at the ICU of Civil Hospital in Ahmednagar, Saturday, Nov. 6, 2021.

[Houston: The Astroworld site is vacant early Saturday, Nov. 6, 2021 after several were killed during surges in the crowd at the Travis Scott performance in Houston. Officials declared a ....... […]

New Delhi, Nov 6 : A three-member team of the National Investigation Agency (NIA) arrived in Canada on November 5 to probe the funding routes to Sikh for Justice (SFJ) and other Khalistan supporters t […]