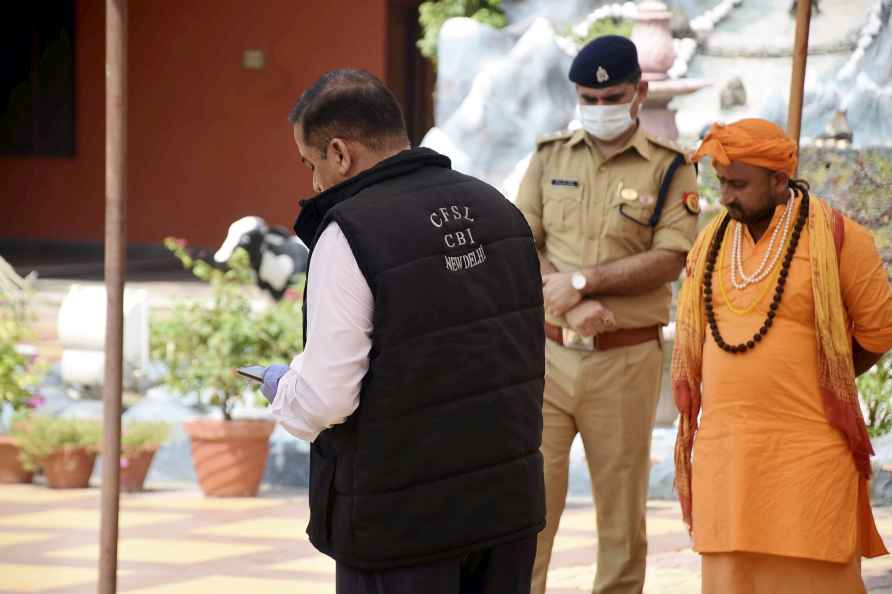 [Prayagraj: Central Bureau of Investigation (CBI) officials during investigation after the death of Akhil Bharatiya Akhara Parishad President Mahant Narendra Giri Maharaj, at Baghambari Gaddi Math in Prayagraj, Sunday, September 26, 2021. ( /PTI] Prayagraj (Uttar Pradesh), Sep 26 : A meeting of the Akhil Bhartiya Akhara Parishad (ABAP), the apex decision-making body of the 13 recognised Hindu monastic orders of the country, is likely to be held in the first week of October to decide the successor of Mahant Narendra Giri, the ABAP chief, who ended his life, allegedly by suicide, on September 20. The 16th day death ritual or 'Shodashi' of Mahant Narendra Giri will take place at his Baghambari Math on October 5. "The general consensus among the representatives of the 13 monastic orders is that the meeting of the ABAP be held just before the 16th-day rituals of the Mahant. The final date will be announced soon," said a senior seer of the Math. Though ABAP's meetings in Prayagraj have always been held at Baghamabi Math premises, the next meeting may not be taking place here as most seers believe that no such event should be held in the Math before the rituals of Shodashi. The ABAP meeting could be held either at Shri Panchayati Akhada's Manahirwani ashram at Daraganj or Shri Panchayati Udaseen Akhada premises at Kydganj in Prayagraj. ABAP's general secretary and patron of Juna Akhada, Mahant Hari Giri confirmed that, "Plans are afoot to hold a meeting of ABAP before the 'Shodashi' rituals of Mahant Narendra Giri. Many important points will be up for discussion during it." Mahant Narendra Giri was elected to the post of ABAP president in 2014 soon after the successful Kumbh 2013 on the banks of Sangam. It was during his tenure as the Akhara Parishad chief that the Kumbh 2019 was held in a grand manner. Narendra Giri was re-elected to the post in October 2019 during a meeting held in Haridwar. Most saints now want a new ABAP chief to be elected on priority as preparations for Kumbh 2025 need to start at least 2-3 years in advance. /IANS

Farmers meet at Singhu border, get draft copy from Centre on 6 demands
[New Delhi: Samyukta Kisan Morcha leaders address a press conference after their meeting to decide their future course of action, at the Singhu border

New Delhi, Dec 7 : The first half of 2021-22 has seen a 185 per cent increase in stainless steel imports compared to the average monthly imports in the last fiscal, creating havoc for the Indian playe […]

Brisbane, Dec 7 : All-rounder Ben Stokes has been included in England's 12-member squad for the opening Ashes Test beginning at The Gabba on December 8, putting to rest speculation that he might not b […]

New Delhi, Dec 7 : Amid an ongoing crackdown against foreign nationals residing in the national capital illegally, the Delhi Police have apprehended 12 Africans with expired visas, an official said he […]