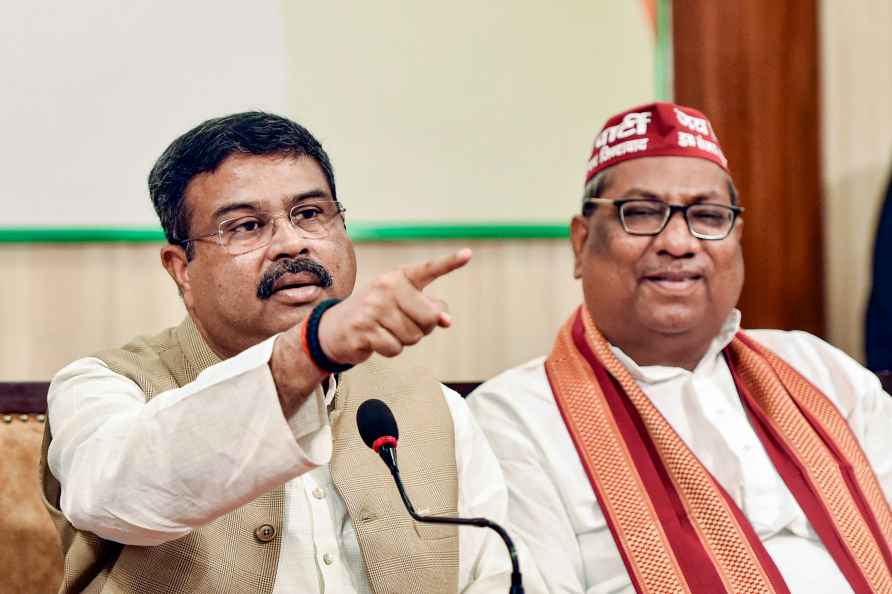 [Lucknow: Union Minister and BJP's U P election incharge Dharmendra Pradhan with Nishad Party President Sanjai Nishad addresses a press conference, in Lucknow, Friday, Sep 24, 2021. ( /PTI] Lucknow, Sep 24 : The Bharatiya Janata Party in Uttar Pradesh has finalised its alliance with the Nishad Party for the upcoming Assembly elections. Talking to reporters, Union Minister Dharmendra Pradhan, who is the party's election in-charge for Uttar Pradesh, said that the alliance would further strengthen the BJP in the next elections. He said that apart from Apna Dal, the Nishad Party would be its ally now. Pradhan said that he had toured the state and met people and was confident that the party would return to power with greater strength. He said that all issues had been addressed and would be known to all at the appropriate time. State BJP president Swatantra Dev Singh said that the three parties would contest the elections together. However, he did not mention about the seat sharing arrangement among the three. /IANS

Former Punjab CM Amarinder may launch own party on Wednesday
Chandigarh, Oct 26 : Former Punjab Chief Minister Amarinder Singh may announce the launch of his own political party -- the Punjab Lok Congress -- on

Lalu's two 'unsavoury' words bring him to centre of Bihar politics
[Darbhanga: RJD Chief Lalu Prasad and party leader Tejashwi Yadav at a rally ahead of the by-elections in Kusheshwar Asthan assembly constituency, in

New Delhi, Oct 26 : Ahead of the UN Climate Change Conference (COP26), the UN Environment Programme (UNEP) on Tuesday warned that new and updated climate commitments fall far short of what is needed t […]

Mumbai, Oct 26 : Bollywood actor Rajkummar Rao shared his feelings after watching the film 'Agneepath', especially when Amitabh Bachchan's character 'Vijay' died in the movie. He will be seen as a spe […]

Hyderabad, Oct 26 : With Allu Arjun and Rashmika Mandanna in the lead roles, the upcoming pan-India movie 'Pushpa' generated good hype all around. With its release date slated during the Christmas sea […]