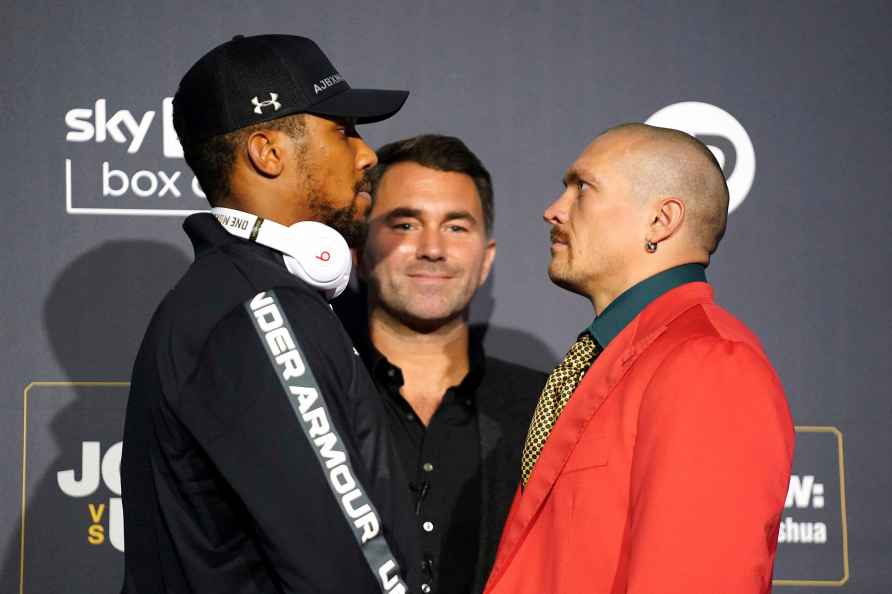 [London: British boxer Anthony Joshua, left, poses for a photo with Ukrainian boxer Oleksandr Usyk, right, with Chairman of Matchroom Boxing Eddie Hearn at centre, during a press conference at the Tottenham Hotspur Stadium, in London, Thursday, Sept. 23, 2021. Joshua faces Oleksandr Usyk in the second defense of his second spell as world heavyweight champion. Joshua holds the IBF, WBA and WBO belts and had been hoping to fight WBC champion Tyson Fury in an effort to become the undisputed heavyweight champ. Fury has to fight Deontay Wilder instead so Usyk is a replacement. /PTI] Sochi, Sep 23 : Two weeks after they crashed into each other, defending F1 drivers' champion Lewis Hamilton will renew his battle with title rival Max Verstappen at this weekend's Russian Grand Prix with both coninuing to race each other "hard and fair". The two main title protagonists collided at the Italian GP in Monza, as they tried to go side-by-side through the first chicane. With both drivers forced out of the race, Verstappen still leads Hamilton by five points in the drivers' championships. With Verstappen hoping to extend the lead, despite starting down the grid because of a place penalty, the two drivers are expected to have another go at each other in Russia. "What is important is that we continue to race hard, but fair," Hamilton told the official Formula1 website. The British driver said he has no lingering effects from the crash at Monza following a week of treatments and yoga to help ease stiffness in his neck. "I have no doubts that we will both be professional and learn from the past." He added: "I never expect a driver to back down. That's not how I approach racing with any drivers. I think ultimately we all have to be smart and know there is a time you're not going to make a corner but it's all about making sure you live to fight at the next corner. "That's really just through experience you find that balance and you know it's not all won on one corner, so there will be other opportunities. "I 'now what it's like having the fight for your first championship and your eagerness and you go through lots of different experiences and emotions during that time. So as I said I do believe that we will continue to get st'onger and I'm hopeful'that we won't have any more incidents through the year," he was quoted as saying in a report on the official website. Hamilton is competing in his 15th season and as a seven-time world champion, has plenty of experience of the pressure that comes with fighting for a title. Verstappen is in his seventh campaign, but this is his first as a genuine championship contender. When asked if he thinks the pressure is catching up with Verstappen a bit as we get to the business end of the season, Ha"ilton replied: "'bviously he won't a'mit to it and I'm not going to make an 'ssumption but I'm just saying I remember what it was like when I had my first one and it definitely mounted up. "It was difficult, it was intense, I was going through a lot of different emotions, I didn't always handle it'the best and that's to 'e expected. There's a lot of pressure, you're working in'a big team, there's a lot of self-expectation and pressure because the desire to'win is huge. So I'm just saying I empathize and I understand that, but I know that we will continue to grow from this." He added: "Time will tell [whether or not he can use his experience to his advantage]. I hope so. Of course it has been an incredibl' difficult year. It's not been smooth sailing in terms of our performance as a team with the car and everything, but i hope so. Naturally there's been a lot of learnings over the course of these first 11, 12, 13 races or whatever we've had, so I hope we see that moving forwards." /IANS