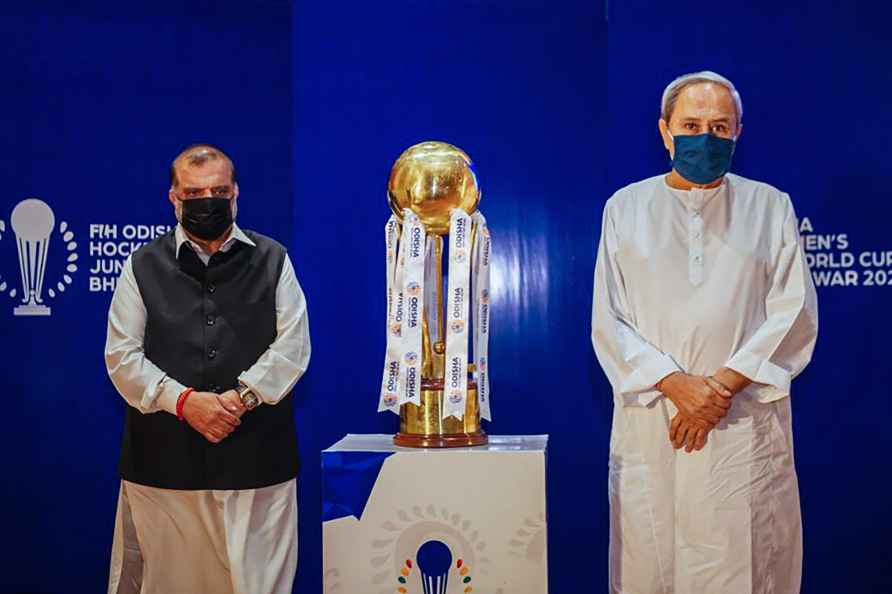 [Bhubaneswar: Odisha CM Naveen Patnaik with FIH President Narinder Batra poses for group photo after making announcement regarding the staging of FIH Odisha Hockey Men's Junior World Cup 2021, in Bhubaneswar, Thursday, Sept 23, 2021. ( /PTI] Bhubaneswar, Sep 23 : Odisha will host the International Hockey Federation's (FIH) Men's Junior Hockey World Cup from November 24 to December 5 at the Kalinga Stadium in Bhubaneswar, Chief Minister Naveen Patnaik announced on Thursday. Addressing a special event organised here for this purpose, Patnaik said that recently the Hockey India had approached the state government to support it for the Men's Junior Hockey World Cup, which is to be held in two months' time. "It is a short notice for making arrangements for such an event, especially during the pandemic period. But since the country's prestige is at stake, we readily agreed to support," he said. Stating that the junior India team had won the last hockey World Cup, he said, "As a defending champion, I am sure that our team will emerge victorious again on home turf." The Chief Minister further said that hockey has a special place in the minds of the people of Odisha and hockey players from the state have led the country in many international tournaments. "Over the last decade, we have been working closely with Hockey India for the development of hockey in the country. We have been sponsoring the national teams since 2018 and have hosted major tournaments, including the senior World Cup," he said. All these efforts led to the historic success of both the men's and women's hockey teams at the recently-held Tokyo Olympics, Patnaik said, adding that this achievement brought great joy to people across the country and there is a lot of excitement about the prospects of Indian hockey in the coming years. He further said that the hockey World Cup to be held in January 2023 will be a landmark event and provide further momentum to the development of hockey in the country. "Odisha will continue to be a part of the journey of Indian hockey. We have rightly announced that Odisha will support the national hockey teams for another 10 years. We are also building India's largest hockey stadium in Rourkela," he informed. The Chief Minister also unveiled the logo and trophy for the Junior World Cup. State Sports and Youth Services Minister Tusharkanti Behera, Hokey India President Narinder Batra, Odisha Hockey Promotion Council Chairman Dilip Tirkey and senior officials of the state government attended the event. /IANS

Key Taliban members got scholarships to India
[Monaco: Prince Albert II of Monaco stands for the Monaco national anthem, during a ceremony honoring Joesphine Baker at the Monaco-Louis II Cemetery

New Delhi, Nov 30 : India reported 6,990 fresh Covid cases in the past 24 hours, below the 10,000-mark for fourth consecutive day, Ministry of Health and Family Welfare said on Tuesday morning. […]

Srinagar, Nov 30 : Cold wave continued unabated in Kashmir and Ladakh on Tuesday as the minimum temperature dropped notches below the freezing point. An official of the Meteorological Department […]

New Delhi, Nov 30 : The Intergovernmental Panel on Climate Change (IPCC) has distributed the final draft of the Working Group III contribution to the Sixth Assessment Report (AR6) to governments. […]