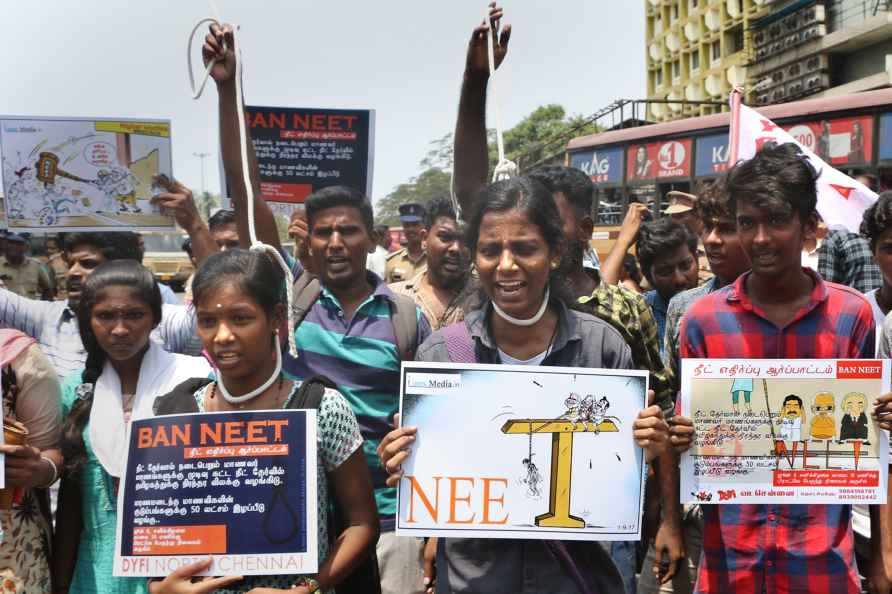 Chennai, Sep 19 : Viduthalai Chiruthaigal Katchi (VCK) is planning to conduct protest marches against the National Eligibility Cum Entrance Examination (NEET). The party leader and MP Thol Thiruvmavalavan told IANS that the NEET has taken the lives of several students, including three in the current academic year and social workers and political leaders of the state cannot watch this helplessly. He also told IANS, "We will be conducting protest marches across the state against the Centre on not giving assent to the Bill moved passed by the Tamil Nadu government in the state Assembly seeking removal of NEET." He also said that NEET is creating a rural and urban divide with the Urban students only getting the benefit of the examination with access to entrance coaching institutions after paying a hefty fee. The VCK, which has been in the forefront of several struggles for social equality and for the upliftment of Dalits, has also requested the President to give assent to the Bill moved by the Tamil Nadu government in the state Assembly. The senior leader also called upon the Tamil Nadu government to provide medical support and financial aid to the girl student, who tried to immolate herself and suffered 60 per cent burns at Chengalpattu following her fear that she had not performed well in NEET. Thol Thiruvamavalavan also said that the party would be conducting black flag protest marches across the state on Monday against the anti-people policies of the Narendra Modi government. /IANS

Agra, Oct 21 : Congress general secretary Priyanka Gandhi Vadra met the family of the man who died in police custody and promised them all help in their fight for justice. Priyanka reached Arun […]

'Cops who clicked selfies with Priyanka will face action'

Lucknow, Oct 21 : Lucknow Police Commissioner D.K. Thakur has said that the women constables who posed for selfies with Priyanka Gandhi Vadra, when she was stopped from proceeding towards Agra on Wedn […]

Washington, Oct 21 : The US Food and Drug Administration (FDA) has authorised Covid-19 booster doses of Moderna and Johnson & Johnson, and approved "mix and match" booster dose for currently available […]