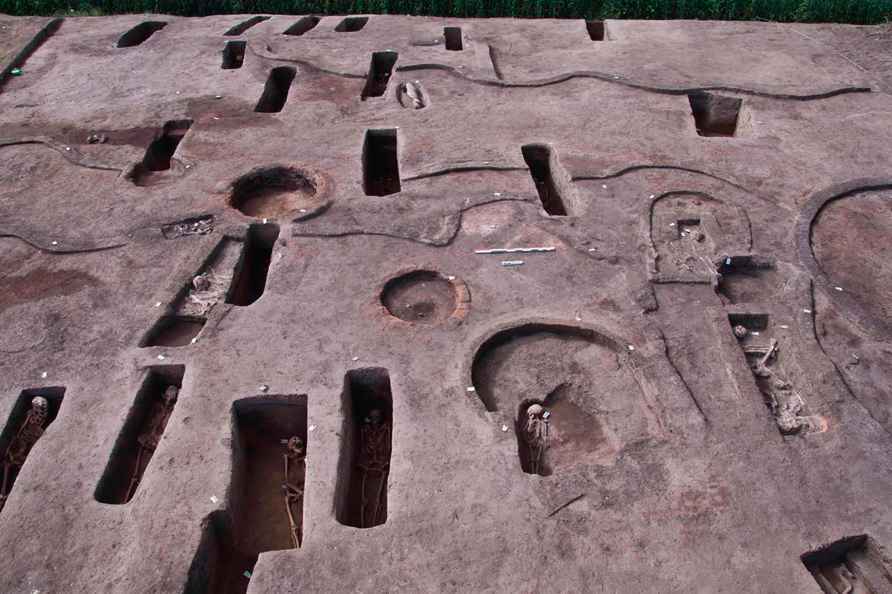 Cairo, Sep 19 : Egyptian archaeologists have unearthed ancient tools once used in religious rituals at a temple site in Kafr el-Sheikh province north of the capital Cairo, the Ministry of Tourism and Antiquities said in a statement. According to the statement issued on Saturday, the discovered objects include part of a limestone pillar in the form of goddess Hathor, a group of faience incense burners, a set of clay pots, a collection of statuettes, a purely golden Udjat eye and remains of golden scales, reports Xinhua news agency. "It is one of the important discoveries because it includes the tools that were actually used in performing the daily religious rituals for goddess Hathor," said Mostafa Waziri, head of the Ministry's Supreme Council of Antiquities. They also unearthed ivory reliefs depicting daily life including women carrying offerings, as well as plants, birds and animals, in addition to a large limestone lintel with hieroglyphic texts and part of a painting of a king performing rituals in the temple, according to Ayman Ashmawy, head of Ancient Egyptian Antiquities Sector at the ministry. Ashmawy added that they found hieroglyphic inscriptions bearing names and titles of Ancient Egyptian kings dating back to over 2,500 years ago. For his part, Hossam Ghoneim, director general of Kafr el-Sheikh antiquities and head of the archaeological mission, said that a large limestone well and a mud brick bath were also discovered. /IANS

Goa wants 'rich tourists', not ones who travel on low budget: Minister
Panaji, Oct 19 : Goa only wants "richest tourists" and not the kind of travellers who visit the coastal state on shoestring budget and cook food in th

New Delhi, Oct 19 : A Delhi-based lawyer on Monday wrote to the Chief Justice of the Supreme Court of Bangladesh demanding a judicial probe into the recent attacks on Hindus and Hindu temples in the […]