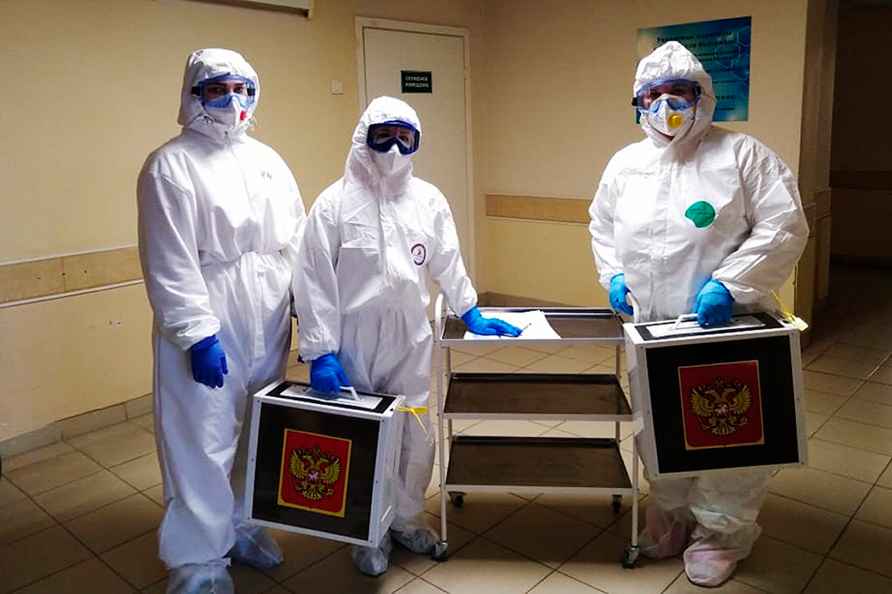 [Voronezh : Medical workers wearing protective gear hold ballot boxes pose for a photo prior to go into the red zone to help to coronavirus patients to attend the voting during the Parliamentary elections in Voronezh, Russia, Sunday, Sept. 19, 2021. From the Baltic Sea to the Pacific Ocean, Russians across eleven time zones voted Sunday on the third and final day of a national election for a new parliament, a ballot in which the pro-Kremlin ruling party is largely expected to retain its majority after months of relentless crackdown on the opposition. /PTI] Mumbai, Sep 19 : India on Sunday won a silver medal in the Asia Rugby U18 Girls Rugby Sevens Championship 2021, losing 21-17 to the United Arab Emirates in a well-fought final held at Tashkent, Uzbekistan. In the final, Nandini top-scored for India with seven points while Aditi Kumari and Tarulata Nair contributed five points each to the Indian score. Both teams scored three ties each. For UAE, Carmela Morralla scored nine points while Hannah Lear added seven, and Lara Botha contributed five. India had reached the final by beating Kazakhstan 24-7 in the semi-final with Sapna Kumari top-scoring with 10 points including two tries. Tarulata Naik scored nine points while Arti Kumari added five points. In the two-day tournament that had five teams -- Kazakhstan, Kyrgyzstan, UAE, India, and hosts Uzbekistan -- and played in an all-play-all round-robin format, India started with a 12-10 defeat to Kazakhstan on Saturday. The girls came back strongly to blank Kyrgyzstan 63-0 with Vaishnavi Dattatray Patil scoring 15 points from three tries and defeated hosts Uzbekistan 20-5. On Sunday, they lost to UAE girls 20-12, thus finishing third in the five-team league and qualifying for the semi-finals. Speaking on the occasion, Rahul Bose, actor, director, philanthropist, and a board member of Rugby India, said, "This is a great moment for Indian Rugby. Both teams (UAE and India) scored three tries in the final. No disgrace losing like that'" "For our U18 girls' team to perform as well as they did is all the more remarkable because they were 15 years old when the pandemic struck. They have never played a National tournament, leave alone an international championship. For them to come so far is a testament to their skill, grit, and fire to make their country proud. Our thanks to the coaching and support staff. Only rugby players know how important they are in this sport. This is a new day for Indian Rugby. We go onward and upward from here," Bose was quoted as saying in a release by Rugby India. Vikram Ahuja, President, Rugby "ndia said, "Heartiest congratulations to our U18 Girls team, their performance has been sensational - they displayed courage, skill, and mental toughness far beyond their years. This is the first step in a series of measures that Rugby India has taken and will continue to undertake to build all our teams into internationally competitive opponents. Our deepest thanks to the coaches, support staff, and all our sponsors & partners for their commitment and kind support towards enabling the team to achieve thi" milestone." The team was trained by coaches from South Africa n'mely'Hendrik 'Naas' Botha (South Africa Rugby Legend & four-time World Rugby Player of the Year), Ludwiche Van Deventer (Rugby Sevens Specialist), along wit' Indian Women's Rugby Team captain Vahbiz Bharucha, mentor and official physiotherapist for the under-18 girls' rugby team. /IANS

Hyderabad, Oct 19 : Ram Gopal Varma is no stranger to controversies, but on Tuesday, he waded into one that has wracked Tollywood's influential trade body, Movie Artists Association (MAA) following it […]

New Delhi, Oct 19 : Legendary cricketer Kapil Dev has opined that all-rounder Hardik Pandya not bowling will not impact Team India's chances at the ICC T20 World Cup. However, he added that it will af […]