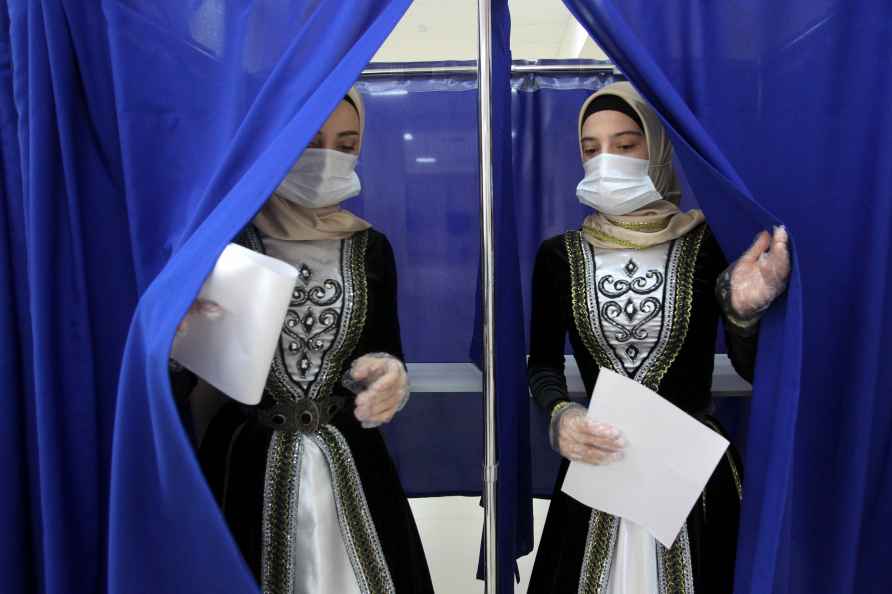 [Grozny : Chechen women weared Chechen national costumes leave a polling booth at a polling station during the Parliamentary elections in Grozny, Russia, Sunday, Sept. 19, 2021. Russia has begun the third day of voting for a new parliament that is unlikely to change the country's political complexion. There's no expectation that United Russia, the party devoted to President Vladimir Putin, will lose its dominance in the State Duma. /PTI] Moscow, Sep 19 : The Russian government still has a strong influence on Telegram despite lifting a ban last year as the encrypted messaging app has temporarily blocked all of the Kremlin critic Alexei Navalny's chatbots during voting in the country's parliamentary election this weekend. Company founder Pavel Durov said that Telegram would obey an election law barring campaigning during elections, calling the law "legitimate", reports Engadget. The move comes despite the nature of the bots and Durov's past statements. One of the bots, Smart Voting, was only meant to identify candidates that could unseat the dominant United Russia party, not just Navalny's Russia of the Future party. Durov also decried tech giants Apple and Google removing the Smart Voting mobile app from their respective app stores, calling it a "dangerous precedent" that tolerated censorship. The country under President Vladimir Putin has routinely cracked down on any political dissent, including actions against Navalny himself (such as an attempted assassination linked to Russian agents) and a long-running effort to quash the broader Smart Voting effort, the report said. Officials both threatened Apple and Google with fines and have gone so far as to try and throttle internet infrastructure providing access to Smart Voting, it added. /IANS

Govt should have acted after 26/11 Mumbai attacks: Manish Tewari in his book

New Delhi, Nov 23 : Congress MP Manish Tewari in his latest book has questioned the UPA-1 government's inaction after the Mumbai attacks. The book is to be officially released on December 2, almost co […]

White House: US to release 50 million barrels of oil from strategic reserve to bring down energy costs. (AP)

White House: US to release 50 million barrels of oil from strategic reserve to bring down energy costs. (AP) […]

Cricket Tasmania appalled by treatment meted out to Tim Paine