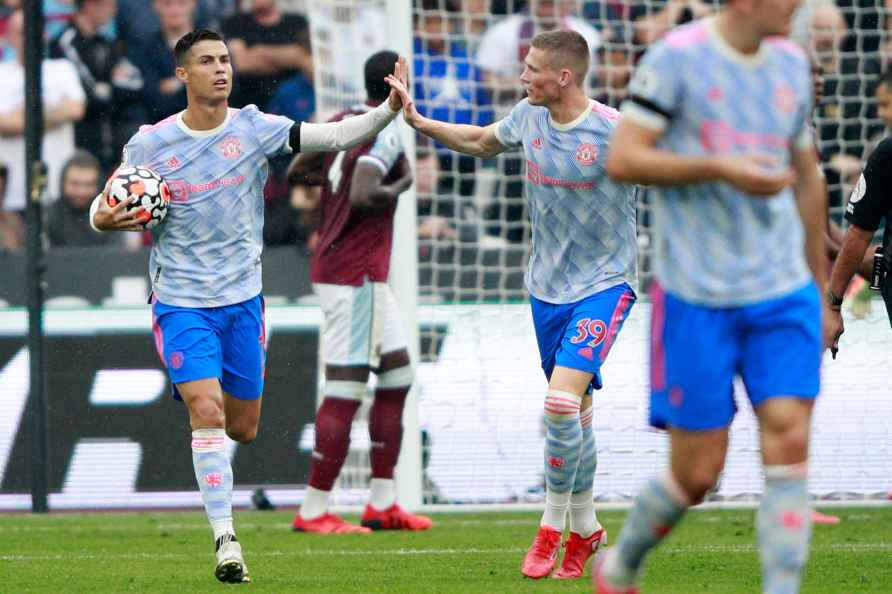 [London : Manchester United's Cristiano Ronaldo, left, celebrates after scoring his side's first goal during the English Premier League soccer match between West Ham United and Manchester United at the London Stadium in London, England, Sunday, Sept. 19, 2021. /PTI] London, Sep 19 : Sadio Mane's 100th goal for Liverpool helped his side go top of the Premier League on Saturday evening after a 3-0 win at home to Crystal Palace. Mane seized on a rebound following Mohamed Salah's header two minutes before halftime, but Liverpool had to wait until the 78th minute for their second of the game when Salah scored following a corner and Nabi Keita added a third in the last minute. Manchester City dropped two points following a flat display at home to Southampton in a game where the VAR overturned a second half decision to give the visitors a penalty and send off Kyle Walker. Referee Jon Moss had originally sent off the Manchester City defender and pointed to the spot, but changed his mind after viewing a pitch-side TV monitor, Xinhua reports. Martin Odegaard's brilliant free kick was enough to give Arsenal a narrow 1-0 win away to struggling Burnley. Burnley have lost four of their first five games this season and they were left frustrated after the VAR overturned a decision to give them a penalty. Burnley have one more point than Norwich, who remain rock bottom with five defeats from five games after losing a duel between recently promoted sides at home to Watford. Dennis Bonaventura put Watford ahead in the 17th minute and although Teemu Pukki canceled that goal out before halftime, two second half strikes from Ismaila Sarr gave Watford a win that lifts them up to tenth. Brentford continued their fine start to life in the Premier League with a 2-0 win away to Wolves, who didn't register a shot on target, despite Brentford playing the last 25 minutes with 10 men after Shandon Baptiste's sending off. By then the visitors were 2-0 up after Ivan Toney netted a 28th minute penalty and set up Bryan Mbeumo for his side's second just six minutes later. Aston Villa ended Everton's unbeaten start to the season with a 3-0 win at Villa Park. All of the goals came in a nine-minute spell midway through the second half with Matty Cash in the 66th minute before Lucas Digne helped Leon Bailey's corner over the line three minutes later and Bailey added a third in the 75th minute. Newcastle United and Leeds United remain winless after a 1-1 draw with Allan Saint-Maximin scoring an equalizer for Newcastle after Raphinha had put Leeds ahead in the 13th minute. Both teams had chances to win the game after the break, but failed to take them. /IANS

Al Amerat, Oct 19 : Bangladesh captain Mahmudullah won the toss and opted to bat against Oman in the 6th match of ICC Men's T20 World Cup 2021 at the Al Amerat Cricket Ground, here on Tuesday. B […]

Fourth Assembly of the ISA

Amritsar: Punjab Chief Minister Charanjit Singh Channi (C) gestures after visiting a temple on the occasion of the Valmiki Jayanti festival on the outskirts of Amritsar, Oct. 20, 2021. ( /PTI […]

Turning point, says Congress on 40% tickets to women in UP

New Delhi, Oct 19 : After the Congress announced that it will give 40 per cent tickets to women in the upcoming assembly polls in Uttar Pradesh, the party leaders termed it as a game changer. The Cong […]