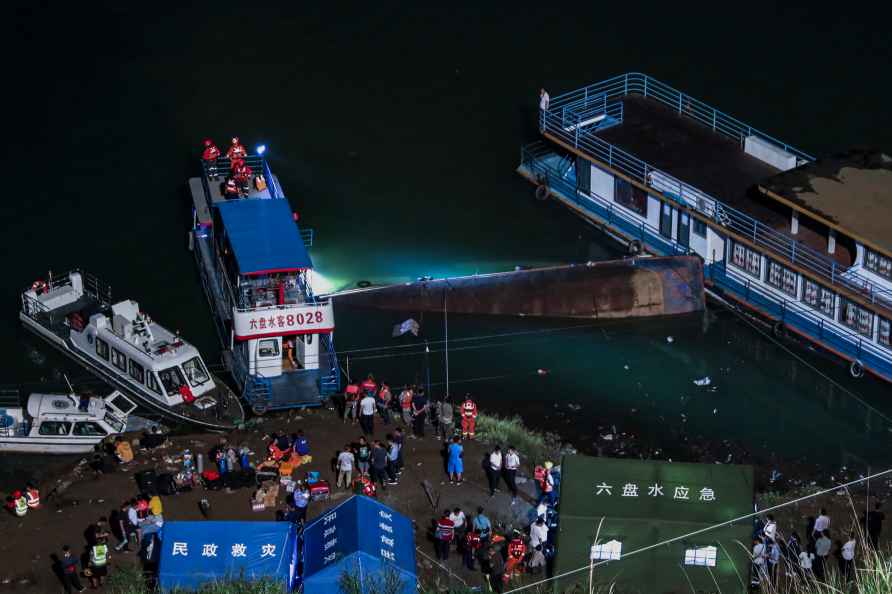 [Liupanshui : In this photo released by Xinhua News Agency, rescuers conduct search and rescue at the site of an overturned passenger ship in Liupanshui in southwest China's Guizhou province, Sunday, Sept. 19, 2021. The boat has left multiple people dead, with several others still missing, according to state media on Sunday. CCTV said that the ship overturned shortly after it departed Saturday evening. Preliminary investigations suggest that the ship was blown over by strong winds. /PTI] Beijing, Sep 19 : Eight people were killed, and seven others reported missing after a passenger boat overturned in a river in China's Guizhou province, local authorities announced on Sunday. The accident took place at 4.50 p.m. on Saturday in Zangke River in the city of Liupanshui, reports Xinhua news agency. As of 8.10 a.m. Sunday, 39 people were rescued from the river, with 31 in non-life-threatening conditions, and eight died after being rescued. The boat was designed to carry up to 40 people. Authorities are still checking the exact number of passengers who were onboard. A rescue operation and an investigation into the cause of the accident are underway. /IANS

Namibia beat the Netherlands by six wickets in crucial Group A game of T20 World Cup in Abu Dhabi.

Namibia beat the Netherlands by six wickets in crucial Group A game of T20 World Cup in Abu Dhabi. […]

Al Amerat, Oct 19 : Bangladesh captain Mahmudullah won the toss and opted to bat against Oman in the 6th match of ICC Men's T20 World Cup 2021 at the Al Amerat Cricket Ground, here on Tuesday. B […]

Fourth Assembly of the ISA

Amritsar: Punjab Chief Minister Charanjit Singh Channi (C) gestures after visiting a temple on the occasion of the Valmiki Jayanti festival on the outskirts of Amritsar, Oct. 20, 2021. ( /PTI […]