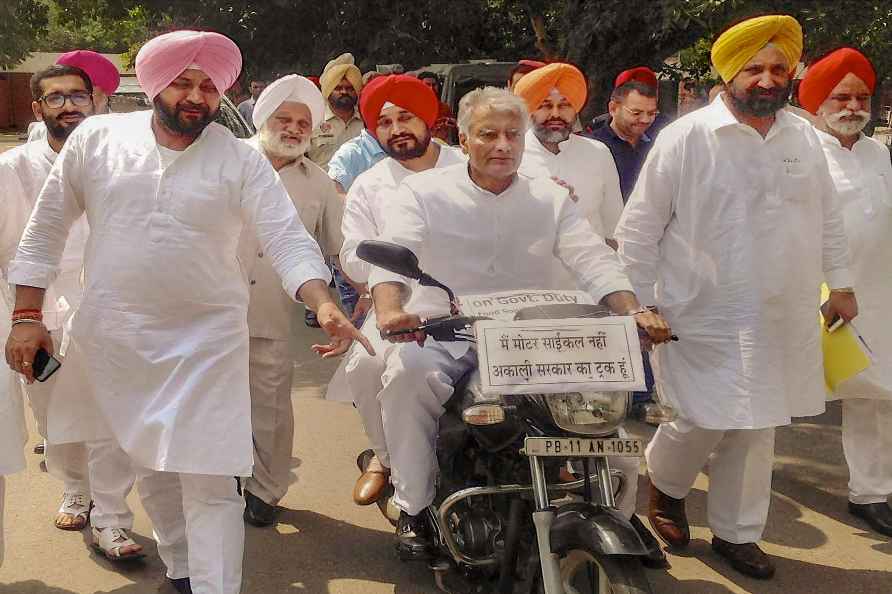 [**EDS FILE PHOTO** Chandigarh: In this file photo dated Aug. 19, 2021, Congress Legislature Party (CLP) chief S Charanjit Singh Channi along with other party MPs and MLAs at a protest rally against Akali givernment outside the Assembly in Chandigarh. Congress leader Charanjit Singh Channi to be new Punjab Chief Minister as declared on Sunday, Sept. 19, 2021. ( /PTI] Chandigarh, Sep 19 : The suspense over the successor to Amarinder Singh ended on Sunday with Congress President Sonia Gandhi clearing the name of Dalit cabinet minister Charanjit Singh Channi as the next Punjab Chief Minister. Channi, who was the Technical Educational and Industrial Training Minister in the Amarinder Singh, was, for quite some time, a hard critic of the Chief Minister. His appointment was announced by state party in charge Harish Rawat on Twitter. "It gives me immense pleasure to announce that Sh. #CharanjitSinghChanni has been unanimously elected as the Leader of the Congress Legislature Party of Punjab", Rawat said. It is learnt that the new-appointed leader of the Congress Legislative Party (CLP) is meeting Governor Banwarilal Purohit to stake claim to form the new government. The 48-year-old Channi has also been Leader of Opposition in the Punjab Assembly during the Parkash Singh Badal-led Akali-BJP government. /IANS

Washington, Oct 19 : A group of US Republicans are planning to push a legislation to ban all federal funding for gain-of-function research after the National Institutes of Health (NIH) reportedly dona […]