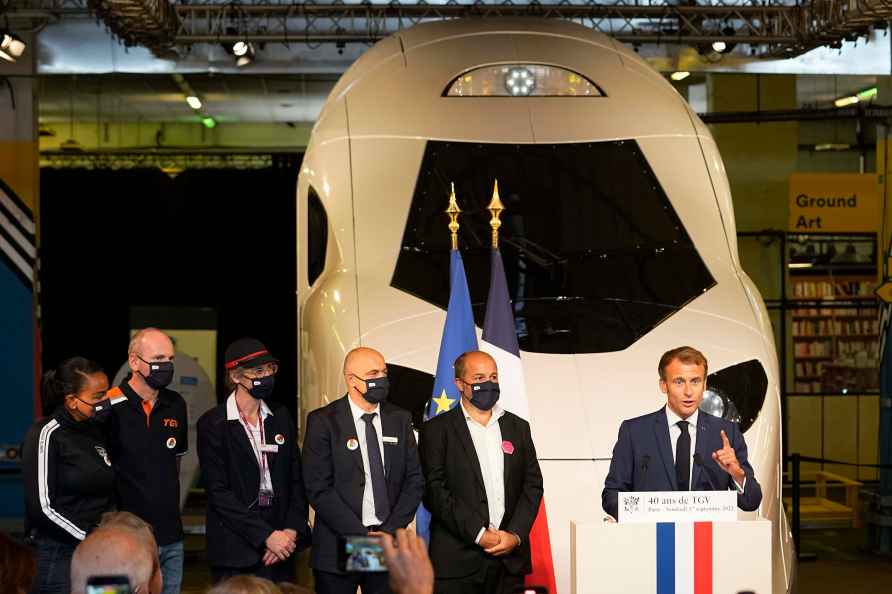 [Paris: French President Emmanuel Macron speaks in front of a life-size replica of the next high-speed train TGV, at the Gare de Lyon station Friday, Sept. 17, 2021 in Paris. France unveils a super-fast, climate-friendly train of the future, the next generation of its high-speed TGV trains that have been emulated around the world. French President Emmanuel Macron and other government officials are holding a ceremony at the historic Gare de Lyon train station in Paris to mark 40 years since the unveiling of the first TGV, or "train a grand vitesse." /PTI] Mexico City, Sep 17 : Visiting Cuban President Miguel Diaz-Canel has thanked Mexico for its support and solidarity amid stiffer economic, trade and financial sanctions imposed by the US against the Caribbean island nation. "Cuba faces a campaign of hatred, disinformation, manipulation and lies on influential digital platforms that ignore ethical boundaries. That is why Mexico's solidarity provokes admiration," Xinhua news agency quoted Diaz-Canel as saying on Thursday. He made the remarks in a speech marking Mexico's Independence Day celebrations to which he was invited as a special guest. The Cuban leader said the visit carried special fraternal significance as his country continues to suffer "a criminal war, with a hardened US economic blockade amid the Covid-19 pandemic". "Cuba will remember Mexico's show of support, its pronouncements against the (US) blockade and its calls for the UN vote against the criminal policy to become a concrete reality," Diaz-Canel said. The President also recalled that Mexico was the only Latin American country that did not sever ties with Cuba when it was expelled from the Organization of American States in 1962. "I pay tribute to the sustained, invariable, passionate and unwavering solidarity that we always find in this land, which all Cubans love as our own," Diaz-Canel added. On his part, Mexican President Andres Manuel Lopez Obrador again urged Washington to end its more than half-century trade embargo against Cuba, calling the sanctions policy "perverse". Also addressing the Independence Day celebrations here, Lopez Obrador admonished that nations should not take advantage of the "misfortune of other peoples" to further their own agenda. The Mexican leader said he hoped his US counterpart Joe Biden has the "political sensitivity" to put an end to the "injustices" that have been committed against Cuba by sanctions designed to destroy the island's economy and cause social upheaval. Lopez Obrador also praised Cuba for withstanding decades of the US sanctions, saying: "Having resisted 62 years without submission is an indisputable historical feat. "The government that I represent respectfully calls on the US government to lift the embargo against Cuba, because no nation has the right to subdue another people, another country." /IANS

After a spate of attacks, non-local workers flee Kashmir
[Srinagar: Migrant workers wait at a railway station as they leave from Kashmir after recent incidents of killing of non-locals allegedly by militants

UK records more than 40,000 Covid cases for fifth day in a row

London, Oct 18 : Another 45,140 people in the UK have tested positive for Covid-19 as the country recorded more than 40,000 coronavirus cases on the fifth consecutive day, according to official figure […]

Snowfall in Lahaul and Spiti

Keylong: Vehicles move slowly on a snow-covered road after fresh snowfall at Keylong in Lahaul and Spiti district, Monday, Oct. 18, 2021. The administration has closed vehicle movement on the Manali- […]