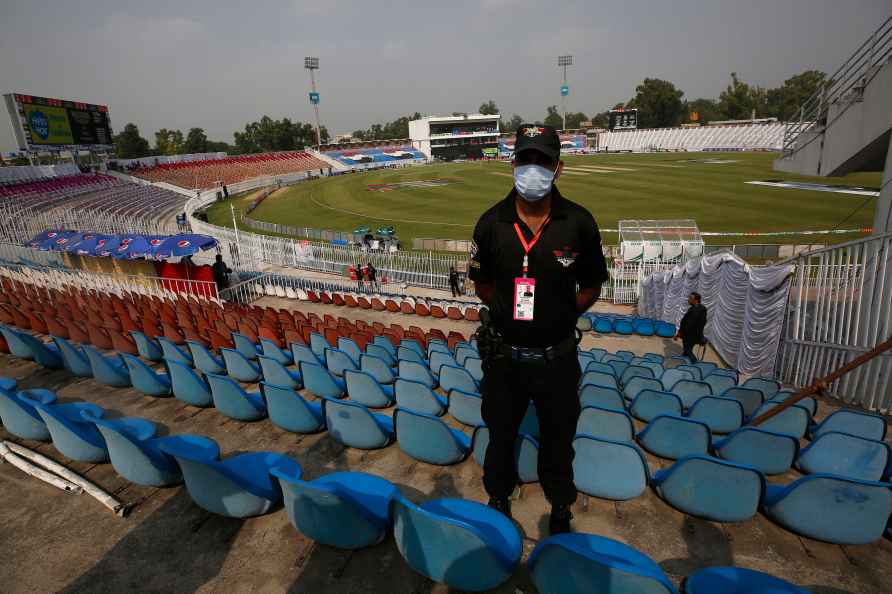 [Islamabad: A Pakistani police officer stands guard an enclosure of the Pindi Cricket Stadium before the stat of the first one day international cricket match between Pakistan and New Zealand at the Pindi Cricket Stadium, in Rawalpindi, Pakistan, Friday, Sept. 17, 2021. The limited-overs series between Pakistan and New Zealand has been postponed due to security concerns of the Kiwis. /PTI] Rawalpindi, Sep 17 : History will be made when the Tom Latham-led New Zealand take on Babar Azam's Pakistan in the first of the three ODIs at the Pindi Cricket Stadium later on Friday. The occasion will see the visitors play their first match on Pakistan soil since 2003. This will be the fourth time the two sides will meet at the Pindi Cricket Stadium in an ODI with Pakistan enjoying a 3-0 advantage. Prior to this match, Pakistan and New Zealand have met 19 times in an ODI in Pakistan between 1976 and 2003 with Pakistan winning 16 times. Pakistan and New Zealand last met in an international 50-over competition during the ICC Men's Cricket World Cup 2019 when Azam's century anchored his side to a six-wicket win at Birmingham. This series provides an opportunity to sixth-ranked Pakistan to climb a spot in the ICC Rankings. If the hosts beat the tourists by a 3-0 scoreline, they will jump to fifth position. However, any other result will see both sides retain their pre-series rankings. New Zealand, the top-ranked ODI team in the ICC Rankings and the finalists of the 2019 World Cup, come into this series with a 3-0 sweep over Bangladesh in the three-match ODI series at home in March and will be eager to extend their winning streak. Pakistan's last outing in the format at this venue was in October-November 2020, when they defeated Zimbabwe 2-1, while in their last ODI series, they defeated South Africa 2-1. The series will not be part of the ICC World Cup Super League as both the Pakistan Cricket Board (PCB) and New Zealand Cricket (NZC) have mutually agreed to swap the status of this series with the one taking place in the 2022/23 season. This means the ODI series in the 2022/23 season will count towards the World Cup 2023 qualification while the series commencing later on Friday will be a bilateral fixture in which team and player ranking points will be up for grabs. Pakistan captain Babar Azam, in his pre-series media conference, said, "Our entire camp is very excited to play New Zealand at home. We have practiced hard for this series and I am sure we will take full advantage of our home conditions. "We have a balanced squad and I remain optimistic about our chances in what promises to be an exciting series. I am sure fans at the stadium and millions watching us on screens will enjoy these matches." New Zealand captain Tom Latham said, "We know it is special for Pakistan to have cricket in their country and we are excited to be here. Pakistan are a quality side and they have some talented white-ball players in their line-up. "We have desired fire-power in our ranks to win this series and I am sure our batters and bowlers will rise to the occasion and make this historic series memorable for us." The second and third matches will be played on September 19 and 21 at the same venue after which the two sides will travel to Lahore for five T20Is between September 25 to October 3. /IANS

Washington, Oct 19 : A group of US Republicans are planning to push a legislation to ban all federal funding for gain-of-function research after the National Institutes of Health (NIH) reportedly dona […]