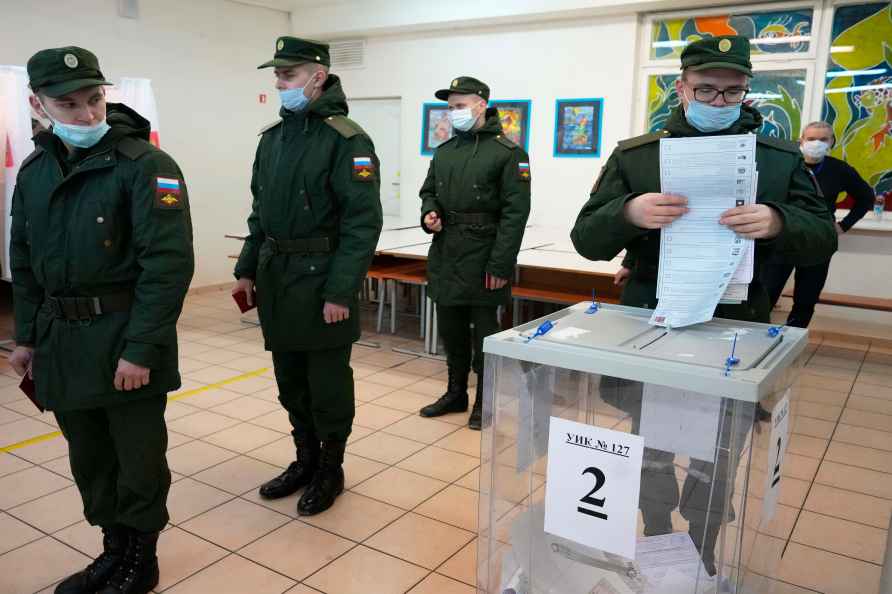 [St. Petersburg:Russian Army soldiers stand in line to vote during the State Duma, the Lower House of the Russian Parliament and local parliaments elections at a polling station outside St. Petersburg, Russia, Friday, Sept. 17, 2021. Russia has begun three days of voting for a new parliament that is unlikely to change the country's political complexion. There's no expectation that United Russia, the party devoted to President Vladimir Putin, will lose its dominance in the State Duma. /PTI] Hyderabad, Sep 17 : Political parties in Telangana on Friday celebrated Telangana Merger Day by paying tributes to the freedom fighters who fought for accession of erstwhile Hyderabad State with the Indian Union. Leaders of the ruling Telangana Rashtra Samithi (TRS) and opposition parties hoisted the national flag at their party offices to mark the day. It was on September 17, 1948 that the then princely state of Hyderabad merged with the Indian Union, following military operation 'Polo', commonly known as 'Police Action'. TRS General Secretary K. Keshava Rao led the celebrations at party headquarters Telangana Bhavan by hoisting the national flag. Speaking on the occasion, Keshava Rao said there was no need for any controversy over September 17. "You call it liberation day or merger day, it's a day of happiness for all of us," he said. The MP recalled that Telangana and other parts of then Hyderabad State did not get Independence on August 15, 1947 and they had to wait for another year. Bharatiya Janata Party (BJP), which celebrates September 17 as Telangana Liberation Day, has been demanding the state government to organise official celebrations. However, the successive governments in undivided Andhra Pradesh and TRS government after formation of Telangana State rejected the demand and accused BJP of pursuing divisive politics by giving communal colour to the merger. The saffron party is organising a public meeting at Nirmal to mark the day, which will be addressed by Union Home Minister Amit Shah. Union minister for culture and tourism G. Kishan Reddy unfurled the national flag at BJP's state headquarters in Hyderabad. He reiterated the demand that Chief Minister K. Chandrasekhar Rao fulfill the promise made during the Telangana movement that after the formation of a separate Telangana state, September 17 will be celebrated officially. BJP national OBC morcha president K. Laxman alleged that the TRS government has become a puppet in the hands of Majlis-e-Ittehadul Muslimeen (MIM). BJP state president Sanjay Kumar, who is currently undertaking a 'padyatra', paid tributes to Sardar Vallabhbhai Patel by garlanding his statue in Kamareddy town. He said the path shown by Patel for the country's unit and sovereignty was inspiring. The BJP leader said Patel gave freedom to people of Telangana by declaring 'police action' and making Nizam surrender. He said Patel's contribution in making India a strong nation will always be remembered. Telangana Pradesh Congress Committee (TPCC) president Revanth Reddy hoisted the national flag at party headquarters Gandhi Bhava. He paid floral tributes to portraits of father of nation Mahatma Gandhi, Jawaharlal Nehru and Sardar Patel. Speaking on the occasion, Revanth Reddy said it was the Congress party which brought Independence. He claimed that Telangana became a part of the Indian union thanks to the efforts of Jawaharlal Nehru. He recalled that even Sardar Patel was president of the Congress party. The MP said there was not a single leader of the BJP which had any role in the Freedom Movement. He alleged that the BJP is using the names of Congress leaders for political gains. The Telugu Desam Party (TDP), the Communist Party of India (CPI) and the Telangana Jana Samithi (TJS) also celebrated 'Telangana Merger Day' with their leaders hoisting the national flag. /IANS

New Delhi, Oct 19 : A Delhi-based lawyer on Monday wrote to the Chief Justice of the Supreme Court of Bangladesh demanding a judicial probe into the recent attacks on Hindus and Hindu temples in the […]