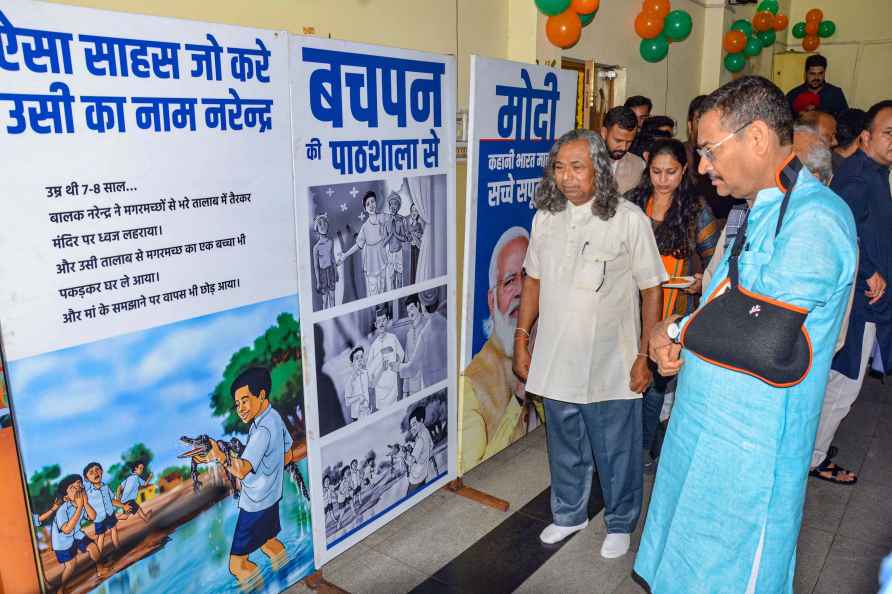 [Ranchi: Jharkhand BJP President Deepak Prakash during the launch of 'Seva aur Samarpan Abhiyan', on the occasion of the 71st birthday of Prime Minister Narendra Modi, at BJP headquarters in Ranchi, Friday, September 17, 2021. ( /PTI] Lucknow, Sep 17 : About 40 lakh beneficiaries of various welfare schemes initiated by the Central government, will send postcards to Prime Minister Narendra Modi, wishing him on his 71st birthday on Friday. Uttar Pradesh BJP General Secretary J.P.S Rathore said that the party plans to send around 25 postcards from each of 1.63 lakh booths, which will add up to around 40 lakh. "The number will, however, depend on availability of postcards in each district," he said. The party has already shortlisted names of people from various castes and communities on whose behalf a postcard greeting would be sent to Modi. "The cards will be sent on behalf of the people who have been benefited by welfare schemes, including Ujjwala, Saubhagya and PM Awas Yojana," the party leader said. This is apparently an effort by the Uttar Pradesh BJP to mobilise maximum number of people for the 2022 Assembly elections and also keep its cadres battle-ready. Since the 2014 Lok Sabha elections, Modi has been the mascot of almost all political campaigns of the party and left his mark on all major social welfare schemes. Earlier, the party had been celebrating his birthday as "Seva Saptah", but this year the campaign has been expanded as "Seva Evam Samarpan Abhiyan", which will run from September 17 (on his birthday) to October 7 (when he became Gujarat's Chief Minister for the first time in 2001). The BJP's heightened activity on Modi's birthday comes two days before the Yogi Adityanath government completes four-a-half-years in office. Rathore said that the party will also organise various social services, including organising health camps, distribution of fruits and medicines to the poor and tree plantation drive to mark the occasion. However, the farmers' meet scheduled for September 19 in Lucknow has been postponed to September 26, in view of the prevailing weather conditions. /IANS

New Delhi, Oct 19 : As the world is witnessing a revolution in the communication industry, several tools and techniques have emerged that assist the brands to drive their brand recall among the audien […]

Hockey India Junior women's nationals to be held in Simdega

New Delhi, Oct 19 : As many as 26 teams will take to the field in Simdega, Jharkhand where they will vie for top honours in the 11th Hockey India Junior Women National Championship 2021 which begins o […]

Amritsar: A view of Golden Temple during sunset, in Amritsar, Wednesday...