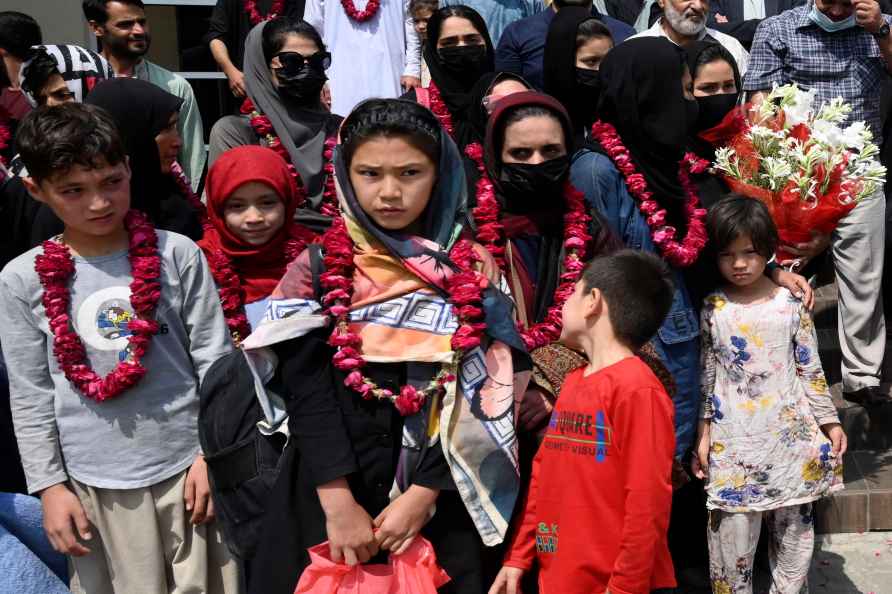 [Lahore: Members of Afghanistan's women soccer team and their families pose for a photograph after they were greeted by officials of the Pakistan Football Federation, in Lahore, Pakistan, Wednesday, Sept. 15, 2021. Officials and local media said Wednesday that an unspecified number of Afghan women players and their family members were allowed to enter in Pakistan after apparently fleeing their country for security reasons. /PTI] New Delhi, Sep 15 : The Afghan embassy in Italy does not recognise the so-called Taliban Emirate caretaker cabinet, Ambassador Khaled A. Zekriya announced. In a sharp anti-Taliban stance, Afghanistan Ambassador to Italy fully endorsed the legacy of Late Commander Ahmad Shah Masoud. The Ambassador in a talk in Rome talked about the implications of a terrorist organization taking power by force and forming an Islamist Radical Emirate Caretaker cabinet. "Masoud is a sign of Afghanistan's political and social continuity, has we have seen in the recent days how people from all over Afghanistan, from different ethnic groups gathered in Panjshir to continue to fight against domestic tyranny and foreign interference in Afghanistan", the Ambassador said. "Let me tell you, in the next following days, weeks, months and even years, this struggle shall solidify and continue. In fact, the demonstration of the brave Afghan women and men in the past few days in Kabul, Herat, Badakhshan, and other part of the country are early signs of a national struggle and uprising in Afghanistan. Though in response, the Taliban killed, wiped, detained, and punished women, men, and our journalists, but they must understand that they cannot win with force and guns; they can win with their so called new strategic communication; and surely they cannot win by being supported by those states, intelligence services, and organizations that support them," he added. Based on the last UNSC resolution, external legitimacy can be attained by the Taliban if they form an inclusive government (which they have not), Zekriya said. "Be held accountable to stand by their commitments of upholding human rights, including of children, women and minorities (which they have totally obliterated)", he added. "Prohibit, Afghanistan's territory for being used by terrorist organisations and their affiliates to threaten or attack any country or to shelter or train terrorist to plan or finance terrorism (This of course, stems from a sense of Naivety that a terrorist organization, where 17 out of 33 of its cabinet members are on the UN Sanction List and/or on the US Black List, with the assumption of power and possession of a political space, can change its political religious ideology and discourse)," he added. "Contrary to our American friends' use of this famous slogan that Americas Long War Has Ended, let me say to you, that the World's Most Complex War-War Against Global Terrorism Has Just Began," Zekriya said. Laying out future premises, Zekriya said that today's Struggle is the West against the Taliban and their terrorist affiliates and those states that either sponsor terrorism and/or have ill interests in Afghanistan. The so called false and bombastic claim to victory by the Taliban against US, EU, and NATO, questions our US, EU and NATO partner's strength, credibility, and utility in the upcoming future conflicts around the world, he said. Terrorist Organizations given political and physical space, in this case Taliban overseeing the state structure, having access to money, military weapons, and controlling the territory of Afghanistan, shall embolden other terrorist groups to overthrow other legitimate states, especially those in North Africa, the Ambassador warned. The Ambassador warned that the so-called victory by the Taliban, shall lead to Home Grown Terrorism around the world. In addition, states that house and espouse terrorist organizations by wanting to deflect their own domestic problems, specifically shift terrorist niches from their territory, will support the creation of terrorist client states. He predicted that Afghanistan once again will become the center of illegal drug production and trade, terror financing, money laundering, and human trafficking being run by a state cartel known as the Taliban as it was witnessed in the late 90s. Diplomatic Recognition of a State ran by terrorist figures being on UN Sanction list and US Blacklist, will embolden the terror groups that the world's political and national interests shall supersede principles of democracy and human rights. At this time the international community should not back off from their principled approach, he added. "As you may remember, first it was said that no one will engage and recognize any group that takes power by force. Then, it was reiterated that the Emirate System is unacceptable. Thereafter, it was explicitly indicated that the formation of an inclusive government is a must. Lastly, it was said that Human Rights violations are intolerable. Now that every condition sat by the international community has been obliterated by the Taliban and tolerated by all of us, this must stop," Zekriya said. /IANS

Hardliner Himanta takes a leaf out of Yogi's political playbook
[Prayagraj: Relatives mourn by the body of Mohamed Usman, 15, who was killed by lightning on Friday at Prayagraj, in the northern Indian state of Utta

73 dead as migrant boat capsizes near Syrian shore
[Tripoli: Mourners carry the coffin of Palestinian Abdul-Al Omar Abdul-Al, 24, who was on a boat carrying migrants from Lebanon that sank in Syrian wa

**EDS: BEST QUALITY AVAILABLE** Pulwama: An injured undergoes treatment at a hospital after being shot at during a terrorist attack in Pulwama, Sept. 24, 2022. Two non-local labourers were shot. ( /PT […]

Very important for me to make my team champions in upcoming PKL season: Fazel Atrachali

Pune, Sep 23 : Puneri Paltan had a terrific Pro Kabaddi League auction when they signed Iranian Mohammad Esmaeil Nabibakhsh for a whopping Rs 87 Lakhs followed by his national side captain and star de […]

I feel my over lost the game for England; was a gamble on my part: Moeen Ali

Karachi, Sep 23 : Stand-in England captain Moeen Ali believes his over, which he admitted was a "gamble", played a pivotal role in his side losing to Pakistan by 10 wickets in the second T20I at the N […]