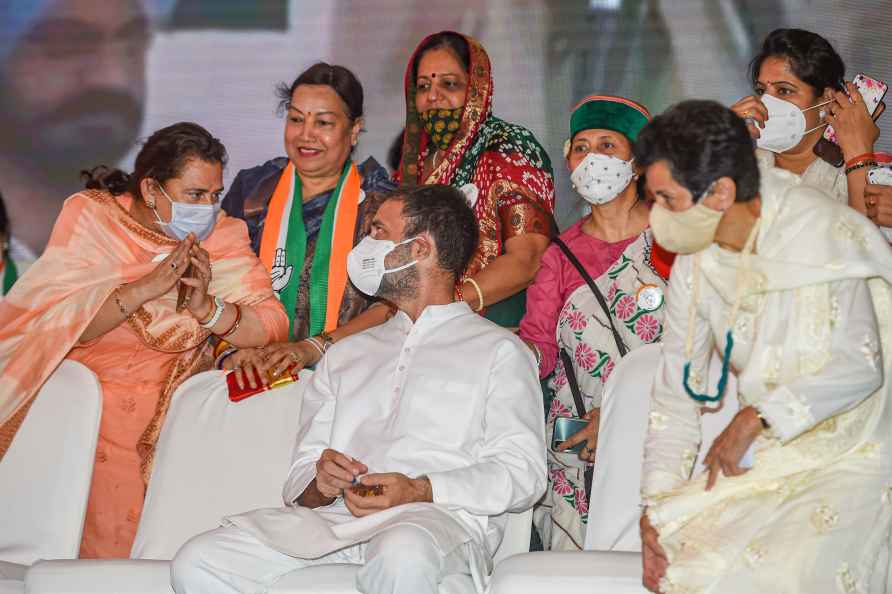 [New Delhi: Congress leader Rahul Gandhi during the 38th Foundation Day celebration of Mahila Congress, at AICC in New Delhi, Wednesday, Sep 15, 2021. ( /PTI] New Delhi, Sep 15 : Senior Congress leader Rahul Gandhi on Wednesday launched scathing attack on the BJP and said that the party is using religion for their gains and they do not care about Hinduism as it is only using the religion to further its interest. Addressing women convention of the party, Rahul Gandhi said, "Ye Jhoothe Hindu hai, hindu dharm ka prayog kar rahein hain, ye hindu nahi hain, hindu dharm ki dalali karte hain. (They are fake hindus and using hinduism for their gains, they are not hindus but brokers of religion). Attacking the BJP, Rahul Gandhi said, "They call themselves hindu party but wherever they go they attack Laxmi and Durga and kill the Godesses, then they say that they are hindus -- which type of Hindus are they?" He said Laxmi and Durga are symbols of empowerment of women and the government is using all means to destroy them through demonetisation, GST, farm laws and inflation. The result of the government's policies is that Diwali is approaching but people's pockets are empty as all the money has been shifted to the friends of the Prime Minister. He accused the RSS of ignoring the women power. In RSS, they have no place for the fairer gender while the Congress has given a woman Prime Minister. "The Congress has a different ideology and as a Congress worker, I can compromise with other ideologies but cannot compromise with the ideology of the BJP and the RSS. This is a big question for us -- what is the difference between Gandhi's Congress', Godse's, and Savarkar's ideologies," he said. The former party president did not stop here, and said that Mahatma Gandhi practised non-violence, then why the ideology of RSS, Savarkar and Godse pumped three bullets in the chest of Gandhi. He alleged that Modi has conceded land to China and thousands of kilometers are now under Chinese occupation but the Prime Minister says nothing has happened. The Congress leader unveiled new symbol of the Mahila Congress which is celebrating its 38th foundation day and said that the Congress symbol resembles in every religion, from Hinduism to Jains to Budhism and Christianity and in Islam people pray while lift their hands. /IANS

11 missing as overloaded boat capsizes in Wardha River in Maha
Amravati (Maharashtra), Sep 14 : In a major tragedy, at least 11 persons are missing and feared drowned after an overloaded boat with 30 persons aboar

Mumbai, Sep 14 : Actor Ritvik Sahore has become a household name ever since he became part of television show 'Indori Ishq'. After working back-to-back in long schedules, he decided to take a break fr […]