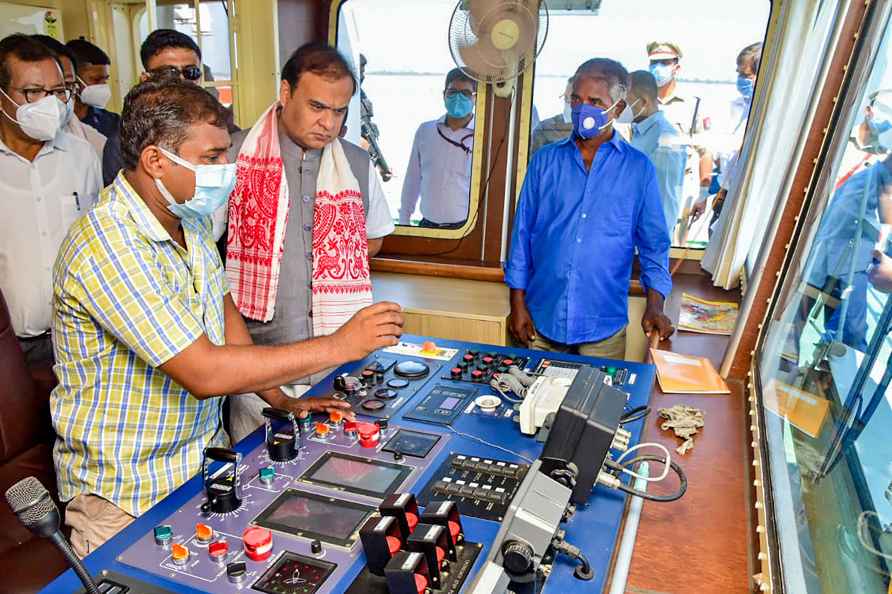 [**EDS TWITTER IMAGE POSTED BY @CMOfficeAssam ON WEDNESDAY, SEPT. 15, 2021** Nimatighat: Assam Chief Minister Himanta Biswa Sarma reviews Ro-Pax at Nimatighat. GoI has also been requested to send two more Ro-Pax vessels to Assam, of which one will ply between Jorhat and Majuli. 8 local boats suspended for having single engines would be converted into marine engines at the expense of the State Govt. ( /PTI] Thiruvananthapuram, Sep 15 : Ahead of the upcoming State party conference, the one thing which is being looked upon is, will the total dominance of Chief Minister Pinarayi Vijayan in the party continue unabated, as has been the state of affairs in the party for a while now in Kerala? The State party conference will be held at Ernakulam in February. Starting Wednesday, across the state, the grassroots level committee meetings of the CPI-M will start and in continuation in the next few weeks, the 14 district committee meetings will be held and from there the members to attend the state party conference would be selected and it's here Vijayan's writ will be seen, when only his most trusted people will be listed to attend the Ernakulam conference. The biggest difference ever since Vijayan assumed office of the Chief Minister in 2016, contrary to the general norm that in the party it's the post of the CPI-M state secretary which towers over the post of Chief Minister, in Vijayan's case it has not been so, as he is the last word both in his party and the ruling Left Democratic Front government which he heads. A media critic on condition of anonymity said, while being the state secretary from 1998 to 2015, Vijayan was able to get complete control of the party and this is his biggest strength. "While Acuthanandan was the Chief Minister from 2006-11, there were numerous occasions when the two had differed and each time Vijayan came out successful and that's because he had the huge majority in the party and by the time he stepped down as secretary, what was known as the 'Achuthanandan' faction was decimated and nothing moved in the party without Vijayan knowing. With the party entirely under his control, he will be able to further consolidate as he knows that he has set his sights for the upcoming Party Congress which is being held in Kannur next year and it will be he who will be calling the shots, which includes, perhaps a new national general secretary," said the critic. Vijayan knows that to ensure that he becomes the last word in the party, even at the national level, there can be nothing which will prevent him from not achieving that and everything that happens from Wednesday till the conclusion of the Ernakulam conference will be under his watchful eyes. /IANS

O.P. Jindal Global University signs MOU with the International Committee of the Red Cross
[Dushanbe : In this photo released by Russian Foreign Ministry Press Service, foreign and defense ministers pose for a photo during a meeting of the C

Lucknow, Sep 14 : Congress veterans in Uttar Pradesh, some of whom stand expelled, have questioned the leadership of party General Secretary Priyanka Gandhi Vadra in the prevailing political scenario. […]

Muraleedharan to visit Algeria from Sep 15-17

New Delhi, Sep 14 : India's Minister of State for External Affairs V. Muraleedharan will be visiting Algeria from September 15 to 17, an official statement said. During his visit, he will call o […]