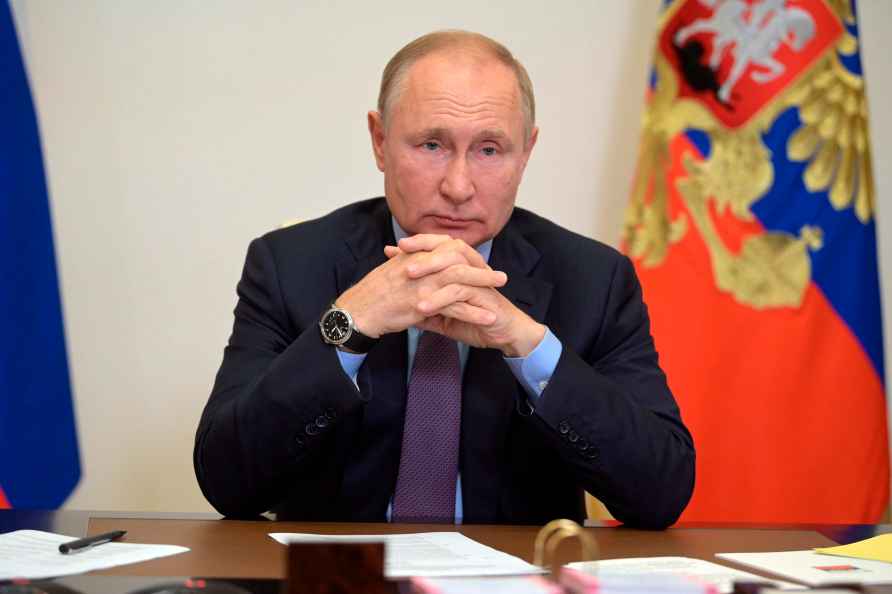 [Moscow: Russian President Vladimir Putin attends a meeting with members of Russian Government and heads of United Russia party via videoconference at the Novo-Ogaryovo residence outside Moscow, Russia, Tuesday, Sept. 14, 2021. Putin entered self-isolation after people in his inner circle became infected with the coronavirus, the Kremlin said Tuesday, adding that the leader himself tested negative for COVID-19. /PTI] Moscow, Sep 14 : Syrian President Bashar al-Assad on Tuesday hailed his country's six-year joint anti-terror campaign with Russia during a meeting with his Russian counterpart Vladimir Putin in Moscow. In the video footage of the meeting released by his office, Assad started his speech by hailing the Syrian-Russian efforts to fight terror groups in his country, Xinhua news agency reported. "I am happy to meet today in Moscow as the six years have passed since the joint operation against terror started, during which both the Syrian and Russian armies made major achievements not only about liberating lands or returning refugees to their areas but through protecting other people across the world because terrorism crosses borders," he said. The Syrian leader noted that his visit to Moscow is an important opportunity to discuss two issues -- fighting terrorism and the political process. He added that his government insists on moving forward with fighting terrorism in parallel with the political process. Putin congratulated Assad on winning the May 26 presidential elections, and spoke about the importance of the reconstruction process in Syria and the need for a political solution to move forward. "The (election) results show that people trust you and, despite all challenges of the previous years and tragedies of the previous years, still associate the process of recovery and return to normal life with you," Putin told Assad. Russia has been supporting the Assad government in the fight against terror groups in Syria since 2015. The last time the two leader spoke was in November 2020 via video conference due to the Covid-19 pandemic. Putin had visited the country in January 2020. /IANS

When playing against Australia, we are a 'bit more pumped': Mandhana

Sydney, Sep 14 : Indian women's team cricketer Smriti Mandhana has said that when it comes to Australia, her teammates are more pumped up because of the level of competitiveness of the rivals and also […]

[Moscow: Russian President Vladimir Putin attends a meeting with members of Russian Government and heads of United Russia party via videoconference at the Novo-Ogaryovo residence outside Moscow, Russi […]

New Delhi, Sep 14 : Speculations are rife in the media and Congress circles about Kanhaiya Kumar, the former JNU Students Union president, joining the party. Sources close to the CPI leader, however, […]