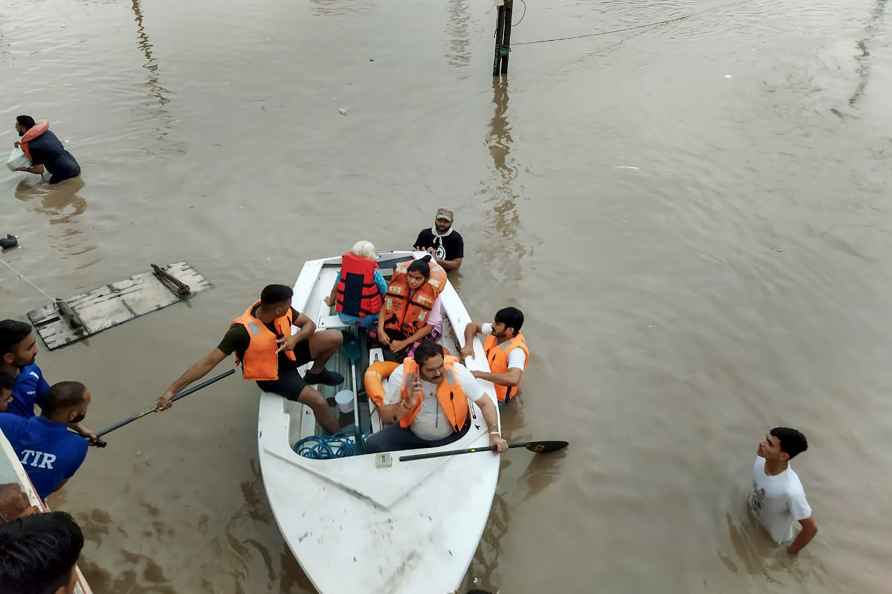 [**EDS: IMAGE PROVIDED BY DEFENCE MINISTRY** Rajkot: Naval Humanitarian Assistance and Disaster relief (HADR) team during a rescue operation after floods due to rain in Rajkot, Tuesday, Sept. 14, 2021. ( /PTI] New Delhi, Sep 14 : The National Disaster Response Force (NDRF) on Tuesday said that it has deployed 20 teams across Gujarat to tackle flooding due to heavy rainfall in many parts of the state. According to the NDRF officials, the teams have been stationed in Morbi, Gandhi Nagar, Jamnagar, DevBhumi Dwarka, Porbandar, Junagarh, Gir Somnath, Amreli, Botad Bayad, Bhavnagar, Valsad, Navsari, Surat and Vadodara. The officials also said that five teams have been airlifted from Punjab and teams are also on standby. The India Meteorological Department (IMD) has predicted heavy rainfall in the next 24 hours along with a flood-like situation. The Indian Navy and Indian Coast Guard have also deployed its rescue teams in Gujarat. The Indian Coast Guard on the request of the Jamnagar Civil administration dispatched six Gemini inflatable boats and 35 personnel, including a medical team from Vadinar to Jamnagar. The Navy dispatched humanitarian assistance and disaster relief (HADR) team, consisting of naval divers with support gear from INS Sardar Patel to Rajkot on Monday evening (September 13) and this will report to district authorities at Rajkot and join rescue efforts as and when required. Six more teams are ready to augment the ongoing civil rescue efforts in affected areas, the Indian Navy said. Similarly, several rescue teams have been deployed from INS Valsura in Jamnagar to assist stranded people from various parts of rain affected and inundated areas of the city. "Equipped with Gemini boats, life vests, first aid kits and other requisite gear, the teams rescued a large number of people including elderly and women and shifted them to safety. Naval teams also provided food packets to stranded citizens", the Indian Navy spokesperson said, adding that senior naval authorities have been in constant liaison with civil administration to offer any help needed in the flood relief activities. More rescue teams have been kept on standby to be dispatched at short notice, the spokesperson added. Heavy rains have battered the state since Monday and around 100 talukas across the State received moderate to heavy rains throughout the day. The newly elected Chief Minister of Gujarat Bhupendra Patel held a review meeting with the top officials and directed that more NDRF teams be deployed if required. Extremely heavy rains in Jamnagar and Rajkot districts led to rivers overflowing their banks and flooding low-lying areas. The district authorities evacuated several people amid forecasts from the IMD that the rains are likely to continue for the next three days. /IANS

I would have loved to have been part of IPL but something has to give: Woakes

New Delhi, Sep 14 : All-rounder Chris Woakes admits he felt he had to pull out of the second leg of the Indian Premier League (IPL) if he wanted to take part in England's hectic schedule this winter, […]

Bengaluru, Sep 14 : Karnataka Police have launched a hunt for an accused for sexually abusing a 22-year-old BPO woman employee at the upscale Langford road in Ashoknagar police station limits in Benga […]