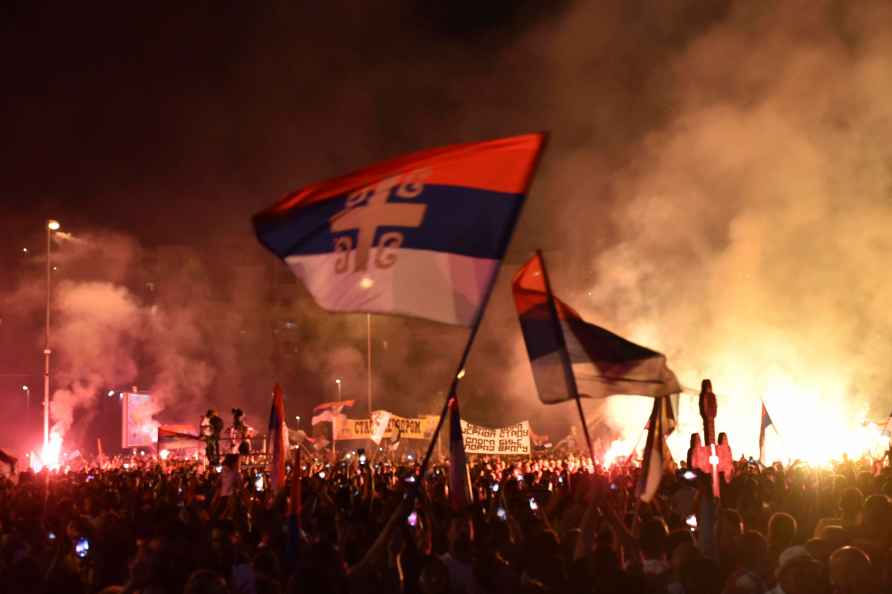 [Podgorica: People attend the arrival of the head of the Serbian Orthodox Church, Patriarch Porfirije, in front of the Serbian Orthodox Church of Christ's Resurrection in Podgorica, Montenegro, Saturday, Sept. 4, 2021. Serbian patriarch Porfirije arrives at Podgorica ahead of the inauguration of the new bishop of the Serbian Orthodox Church in Montenegro scheduled in Cetinje, sparking tensions. On Saturday, hundreds of protesters confronted the police in Cetinje and briefly removed some of the protective metal fences around the monastery where the inauguration of Mitropolitan Joanikije is supposed to take place. /PTI] By Arul Louis New York, Sep 5 : Four people of Indian origin and a Nepali family of three have died in New York from the flooding caused by Hurricane Ida that battered the US. Phamatee Ramskriet, 43, and her son Krishah, 22, drowned when their basement flat flooded in New York City on September 1. Mingma Sherpa, 48, and Ang Gelu Lama, 52, and their infant son Lobsang Lama, 2, also drowned when the waters from the record-setting downpour in the city inundated their basement flat. President Joe Biden is scheduled to visit the New York City county where they died and the New Jersey areas affected by the floods on Tuesday. In neighbouring New Jersey, Malathi Kanche, 46, drowned after she was swept away when her car stalled on a flooded road. Also in New Jersey, Danush Reddy, 31, was sucked into a 36-inch sewer pipe by the floods. Even though Hurrican Ida was most devasting in Louisiana state and its neighbours in the south where entire localities were totally destroyed, its deadliest human toll was in the New York region where at least 42 people were killed -- 25 in New Jersey, 16 in New York City and one in Connecticut. Of the total rainfall that day of 20.5 cm, more than 7.5 cm fell within an hour and New York Governor Kathy Hochul likened it to "Niagara Falls-level" of water falling on the city. The city's infrastructure was overwhelmed by the intensity of the rain. Leaders blamed the torrential rain on global warming. "Global warming is upon us and it's going to get worse, and worse, and worse, unless we do something about it," Chuck Schumer, the leader of the Democratic Party in the Senate said. "When you get all the changes we've seen in weather, that's not a coincidence," he added. Biden has declared a state of emergency for the two states to enable them to get federal aid rapidly. New York Post reported that as floodwaters crashed through the basement flat of the Ramskriets, their landlord Ragendra Shivprasad tried to warn them of the impending danger and asked them to get out. "As I see the water raising I go back, I tell them, 'You guys gotta be careful, you guys gotta move'," Shivprasad told the Post but the waters had already engulfed the flat and Phamatee and Krishah drowned. Phamatee's husband Dameshwar and another son Dylan survived. Deborah Torres, a neighbour of the Lama family, told the Post that the waters rose so fast that it reached her knees on the second floor before they had a chance of getting out. Police divers found the bodies the next morning, the newspaper said. Raritan Mayor Zachary Bray announced the death of Kanche on Facebook, writing: "It is with a heavy heart that I have to report the loss of one of our own citizens due to Hurricane Ida." Patch, an online news outlet reported that according to a relative her car stalled in the floodwaters in Bridgewater and she was swept away while her 15-year-old daughter was able to swim to a car dealership and was rescued. The body of Malathi Kanche, a software engineer, was found about 8 km away in Boundbrook, according to TapInto another local news site. South Plainfield Mayor Matthew Anesh, who announced the death of Reddy said that police heard a woman's cry for help about a man being swept away by floods. He said that the police who responded found that two men were missing and were able to rescue one of them. But Reddy, who was sucked into the sewer pipe, could not be located then but the next morning, his body was found swept up to a wooded area in neighbouring Piscataway, about 8 km away, Anesh said. "We are heartbroken by this tragic loss of life and pray for Mr. Reddy and his family," he said. (Arul Louis can be reached at arul.l@ians.in and followed on Twitter at @arulouis) /IANS

By Sukant Deepak New Delhi, Oct 7 : In a fast-shrinking world where amalgamation of different cultures no longer raises many puritans' eyebrows, sitar player Purbayan Chatterjee, who for many years […]