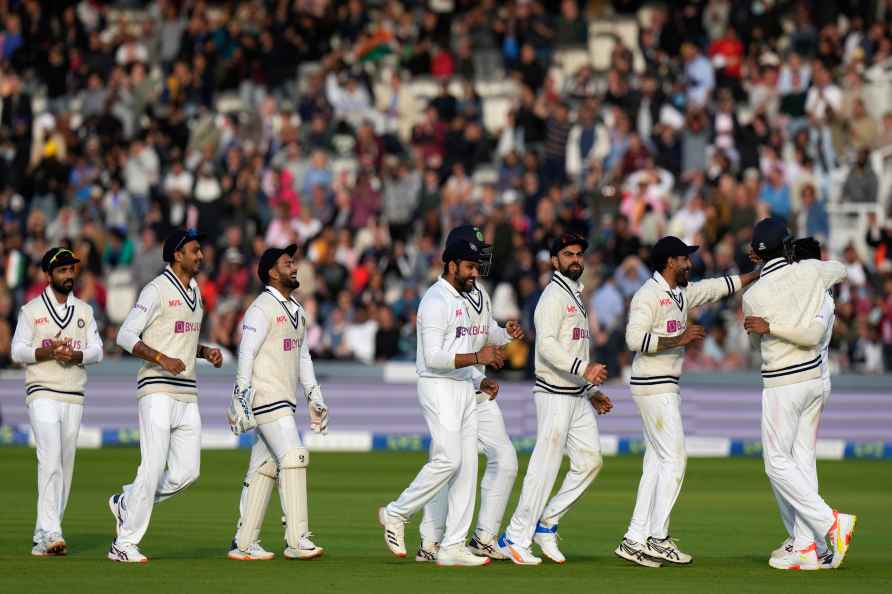 Leeds, Aug 26 : Former England captain Nasser Hussain has said that Indian captain Virat Kohli is playing at a lot of deliveries which he could leave. He added that Kohli is making the same mistakes from the horror 2014 tour, which he rectified in 2018. Kohli has scored just 42 runs in four innings of the ongoing Test series, averaging only 17.25. On Wednesday, he was dismissed for seven by nicking behind t' 'keeper Jos Buttler off James Anderson. It has been 50 innings without a three-figure score for Kohli in international cricket since November 2019. "England had a ball that swung from the off -- in contrast, there was no swing for India -- and that made them more confident in bowling a fuller length. They found the perfect length with a moving ball from the off," wrote Hussain in his column for the Daily Mail on Thursday. "And that was good enough to dismiss Kohli cheaply again. I did a masterclass for Sky with Virat when he said he had made a change to his technique after a disappointing tour of England in 2014. In that series Kohli's back foot was not moving how he wanted it to, his alignment was horribly wrong and he was nicking too many balls," said Hussain, referring to the masterclass video of January 2017. "So when he came back four years later he made sure that back foot was much squarer and pointing towards cover point. It led to a much more prolific series against Anderson and Co but now his back foot is not moving the way he wants again," pointed out the 53-year-old. "Kohli was also leaving a lot of balls in 2018 and said that you have to put your ego away in England. I'm not saying he hasn't done that now but his brain is a bit scrambled and he's playing at a lot of deliveries he could leave," concluded Hussain. /IANS

We did not bowl well initially, NZ's Southee after loss in first T20I
Jaipur, Nov 18 : Tim Southee, who led New Zealand in the first T20I of the three-match series against India in the absence of regular skipper Kane Wil

Perfect gift from Boult on my wife's birthday, SKY on dropped catch
Jaipur, Nov 18 : Suryakumar Yadav has thanked New Zealand bowler Trent Boult for the dropped catch, terming it as a "perfect gift" from him on the bir

Srinagar, Nov 18 : The five terrorists killed in two separate encounters with the security forces at Pombay and Gopalpora in South Kashmir's Kulgam district have been identified, and one of them was a […]