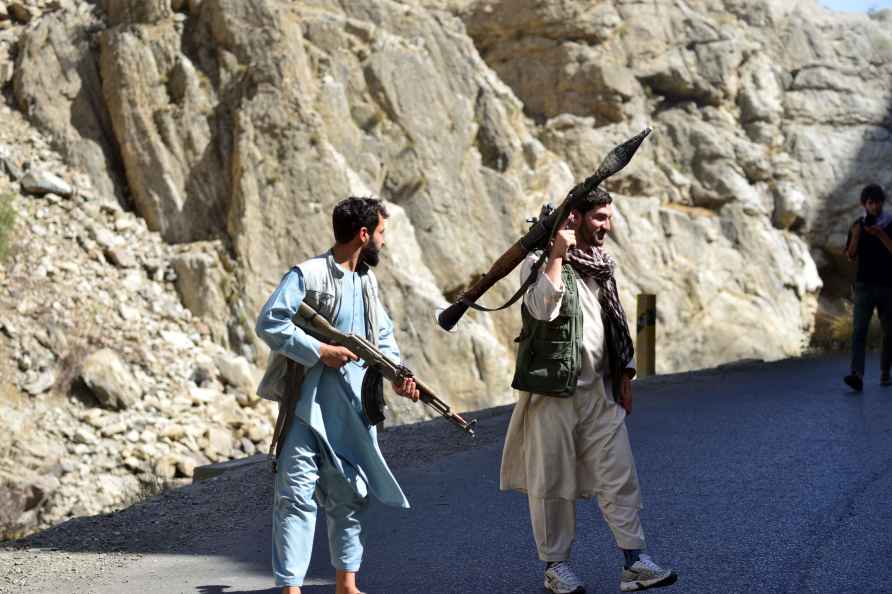 [Panjshir: Militiamen loyal to Ahmad Massoud, son of Ahmad Shah Massoud, stand guard in Panjshir province northeastern of Afghanistan, Wednesday, Aug. 25, 2021. The Panjshir Valley is the last region not under Taliban control following their stunning blitz across Afghanistan. Local fighters held off the Soviets in the 1980s and the Taliban a decade later under the leadership of Ahmad Shah Massoud, a guerrilla fighter who attained near-mythic status before he was killed in a suicide bombing. /PTI] By Sumit Kumar Singh New Delhi, Aug 25 : At a time when world leaders are still weary of diplomatic dealings with Afghanistan after the Taliban takeover, China has established its first diplomatic contact with the militant group, aimed at pushing forward its ambitious project -- the China-Pakistan Economic Corridor (CPEC) -- to Kabul. Sources said that in a bid to push the CPEC, China is exploring opportunities to exploit Pakistan to enter the war-torn country. Chinese Ambassador to Afghanistan, Wang Yu, met Abdul Salam Hanafi, the deputy head of the Taliban political office in Qatar, in Kabul and had unimpeded and effective communication and consultation, sources said. Talking about the meeting, Chinese Foreign Ministry spokesperson Wang Wenbin said in a media briefing in Beijing, "China respects the Afghan people's independent decision on their own future and destiny, and supports the implementation of the Afghan-led and Afghan-owned principle." He also said that China will develop good, neighbourly relations of friendship and cooperation with Afghanistan and play a constructive role in the peace and reconstruction of the country. Seeing the swift changes in the security challenges in Afghanistan and the new diplomatic alignments, India is keeping a close watch on the developments in the war-torn nation. Sources said the Chinese are in talks with the Taliban and has again proposed the construction of the Peshawar-Kabul road. Chinese proposal for the construction of the Peshawar-Kabul motorway was anticipated by the Indian security establishment even before the Taliban take over of Afghanistan. Indian Air Force Chief, Air Chief Marshal R.K.S. Bhadauria, had said last year that Pakistan is becoming a pawn in the Chinese policy and could use the country to enter Afghanistan after the exit of US forces. Bhadauria had said that US exit from Afghanistan will open options for China in the region, both direct and through Pakistan, allowing it entry into Central Asia, a region it has been eyeing for long. The CPEC, one of the most ambitious components of Beijing's Belt and Road Initiative, was announced to great fanfare in 2015. Since then, it has consistently been held as a "gamechanger" for Pakistan's economy. But the road to completion has proved long and winding. It is a bilateral project with a large network of roads, railways and pipelines spanning across 3,000 km that will facilitate trade between China, Pakistan and other countries in the region. (Sumit Kumar Singh can be reached at sumit.k@ians.in)A /IANS

By Arul Louis New York, Sep 25 : The leaders of the Quad nations -- the US, Australia, Japan and India -- have denounced the use of terrorist proxies and demanded an end to support for terrorism, w […]

Los Angeles, Sep 25 : Multiple film studios and streaming portals have come out swinging for a pie of what is sure to be a hot thriller project featuring the 'Ocean's 11' team of George Clooney and Br […]

Seoul, Sep 25 : North Korean leader Kim Jong-un has said his country's strong relations with China will further grow against "vicious challenges and obstruction by the hostile forces" in a letter to C […]